Anyone who has been following new textile work, will have noticed how quickly the work is evolving. It started in 2016, when I began reinterpreting representational artwork from my sketchbooks, to see what would happen. But over the course of a year, things rapidly became more abstract, with explorations of mark-making at the work's core. 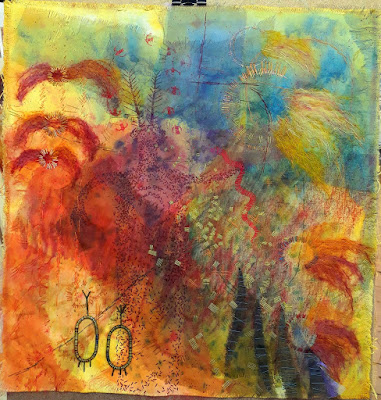 In the last 6 months, I've been playing around with images borrowed from ancient cave paintings, like the recently finished piece above, layering colour and overlaying stitching to echo the build-up of layers of time around cave art.

But my textile work so far has always been two dimensional. More than that - I have been a working artist for 40 years, but I have always seen myself as a 2D artist. However, something radical has happened since Christmas - I have started making things! 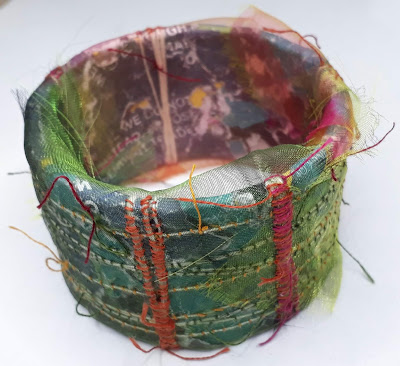 I went on a fun workshop in December, which got me thinking. I learnt a technique for creating highly textured, 3-dimensional textile objects. I ended up with this fish: 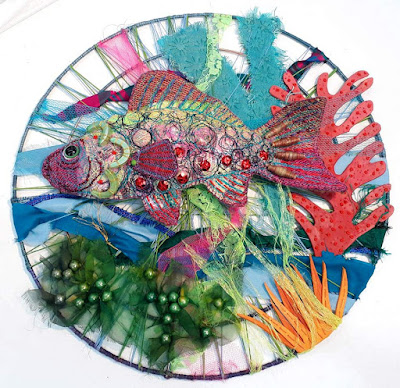 It was far more representational than my usual work, but it got me thinking in new ways and I began trying things out.

Mostly, I have no idea where I am going, or any expectations about specific outcomes: it's pure exploration again, which is of course, great fun. It's creative play as much as anything, using the materials I have and seeing what I can do with them: 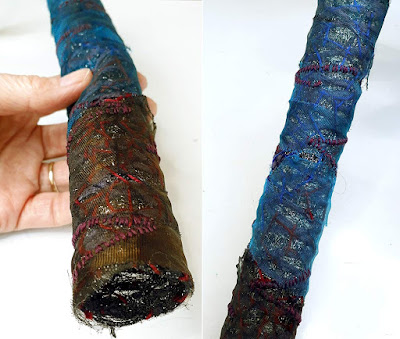 I think this move to 3D was also partly inspired by exhibiting alongside Katie Jamieson in December, who does a lot of wire-binding. Plus, by pure chance, around the same time, I stayed in a hotel where some interested books on textiles were laying around, including Stitch and Structure, by Jean Draper, which was full of really interesting work and techniques. 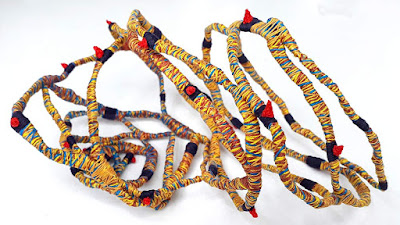 As soon as I got home, I got the book out of the library. I created a paper 'thread', twisted it into a distorted coil, then bound it around with coloured embroidery cotton. To add a complimentary rhythm, I stitched on little red thorns, which were very fiddly:

I decided to work bigger for the next piece, which worked on a similar shape, but was created from fabric, bound around fairly thick wire, to make it stronger and easier to work: 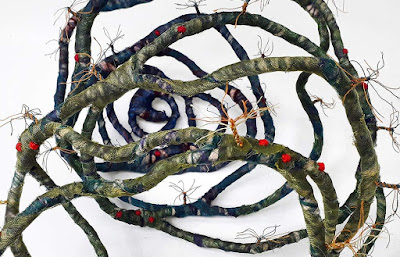 This time the embellishments were more delicate. I 'wove' little spines, by repeated knotting, and used dilute PVA to make the thread ends hold their shape. I was thinking about the way undersea objects get weathered and colonised by creatures, like barnacles and anemones. 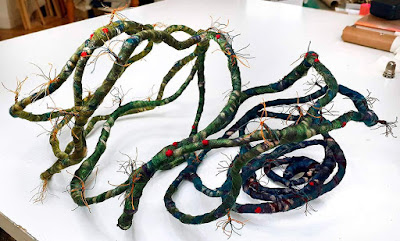 I am now working on a piece which was inspired in large part by a trip to Elgin Cathedral, where I took lots of photos of the winged grave carvings: 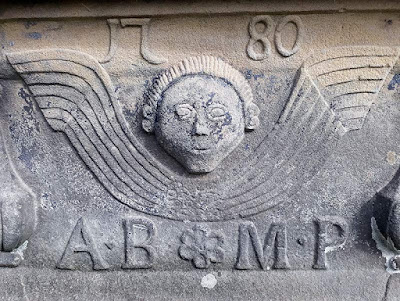 I also came across a cave painting of a bird, which for some reason really stuck with me. I was excited by the extremely pointy feathers and the blood red paint: 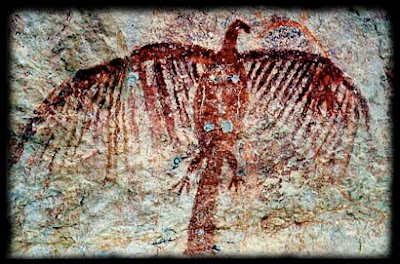 The two things came together and I felt the need to create something based on the wing shapes. I began binding more wire... 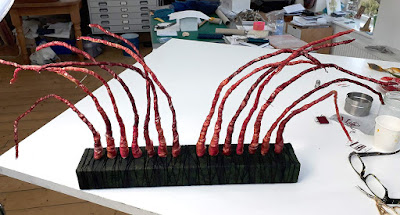 It's not finished yet, but it's getting there. I know my Mum will hate it, because she will think it looks like spiders legs. Sorry Mum!