Happy New Year folks! Hope you all had a good Christmas and a nice rest. Mine was lovely. I enjoyed relaxing, but also did some stitching: I started something new straight after the exhibition came down. I'll show you when it's done.

Anyway, remember back in November, I was making more concertina sketchbooks, preparing for a new residency, working with York University? Well, I have now done two sketching days and, so far, it is all going really well. 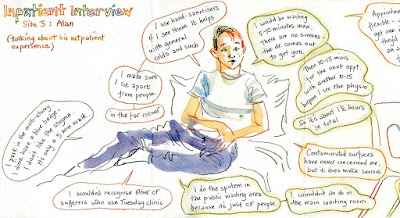 York's research project, called PARC (Pathways, Practices and Architectures: Containing Antimicrobial Resistance in the Cystic Fibrosis Clinic), interviews sufferers of CF to try and find out how they feel about their experiences of going to Out-Patients for their regular check-ups.

I am using my concertinas, so I can get flow between images and create longer pieces of artwork with everything on together, rather than lots of individual drawings, as I did with the 'day in the life of a site manager', or architect. As you can see from the complete example above, these concertinas are much shorter than those I used in Australia, or with the Unfolding Stories project at the Morgan Centre. This is necessary, because this is a much shorter residency, so I need to be able to make them as quickly and easily as possible.

Of course, it's never great having to visit hospitals, but it's particularly awkward if you have Cystic Fibrosis, because there is such a high risk of patients cross-infecting one another within the hospital, if steps aren't taken to help prevent it. On top of this, the processes designed to help stop cross-infection can easily make the patient experience less pleasant. 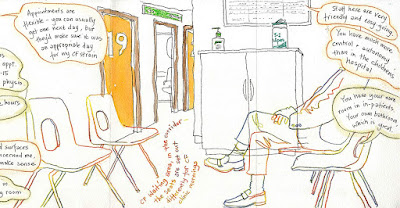 How my part in the project works, is that doctors at different hospitals find volunteers for us, patients who are happy not only to be interviewed, but also sketched! We catch them after a check-up appointment and the researcher spends about an hour chatting to them, while I scribble away, doing my best to capture what I can. 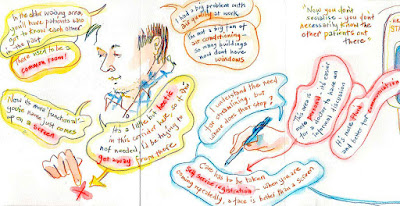 One of the issues I have to contend with during the sketching, is the need for anonymity. It's important that I paint the interviewees as I see them, to capture their body-language, because it's that which makes them feel authentic, but I have to alter key elements of their appearance, such as hair-colour, age, glasses etc. (all the names you see on the sketchbooks are made up, by the way). This approach is a new experiment for me and I wasn't sure how easy it would be to pull off, but it seems to be working out okay.

The other, slightly trickier issue, which I quickly realised when we got going on the project, is that, if we're not careful, the sketchbooks will become visually dull and very samey - basically, there's only so much you can do with a person and what they say. The environment the interviews are done in is generally a very sterile room and not relevant anyway. 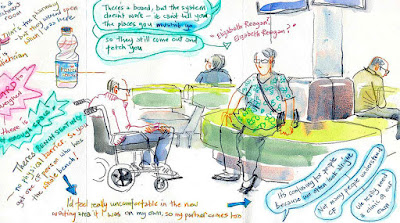 So I have been going into the hospital registration and waiting areas after the interviews, trying to capture the environments which come up in the interviews. This makes things more visually varied, but also helps to give context to the quotes I'm recording.

The only trouble is, since the actual interviews are over by that stage, I have had to rely on the researcher's notes / recordings, to add additional text to those sections of the sketchbooks, after the event, otherwise the sketchbooks wouldn't flow properly. This was a technique I used a lot in Australia, because in some environments it was hard to hear what was being said, or too difficult to listen and draw at the same time.

We will be visiting three different hospitals during the project and I'll be going back two or three times to each, but the visits will be stretched out over several months. The two days we have done so far have been in a particularly good hospital, one which is working hard to protect their CF patients. Sufferers we interviewed gave very good feedback about their experiences, although there are still lots of issues coming out around the waiting areas and how CF patients are viewed by non-CF sufferers.

As always, the sketching element has been fun, but the finding-out-new-stuff part of the work adds to it immeasurably. It feels good to be giving ordinary people a voice too. I so enjoy the sociability of the work as well, compared to what my working day used to involve when I was a book illustrator - basically me on my own in the studio for 3 months! 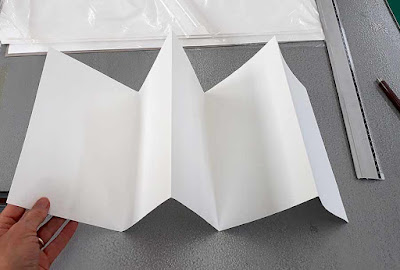 If you fancy having a go at working on a quick mini-concertina, they are extremely easy to make. My illustrated 'how to' post show you step-by-step what to do. I can't recommend the format enough - it is so liberating not to have to work within the confines of the usual page edges.