It sometimes makes me laugh: as an illustrator you catch yourself having very serious conversations about the funniest subjects. This time it was blue bottoms. Julia Jarman wrote a Blue-Bottomed Baboon into The Jungle Grumble. He of course wants to swap his bum for something different (he ends up with Zebra's stripy tail in its place, but that's by the by). 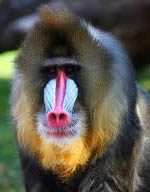 The thing is, when I did my photo-search for reference, not one single photo of a baboon's blue bum came up. There were plenty of the disturbingly swollen, red ones, which look like they've been inflated (built-in cushion?), but no blue ones. However, a photo of a mandrill's blue bottom did appear. I hadn't heard of a mandrill: it's a bit baboony, but with a face like an explosion at a cosmetics counter.

A bit more research told me that there was no such thing as a blue bottomed baboon. So I emailed my publisher, who emailed Julia, who texted me. According to Wikipedia, the mandrill is often referred to as a baboon, so we thought we could get away with me drawing the mandrill instead. That suited me, as mandrills look so bonkers. Also, to be honest, I don't especially like drawing baboons: their faces are hard to get right (I drew baboons-in-pantaloons in Lark in the Ark). 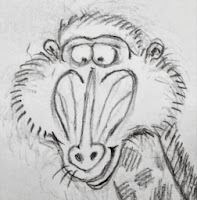 That's when I did this sketch of a mandrill's head (on a giraffe's neck, naturally).

The only snag is that mandrills don't have monkey tails - they have short, rough tails, more like a goat. I thought that might be a little bit confusing in the final illustrations, especially given that our mandrill would have to give his tail to someone else when he swapped his bum.

I was just discussing the ethics of sticking a baboon's tail onto a mandrill, when my editor found another blue-bottomed monkey.

The lesula monkey was only discovered in 2007. It has a perfect monkey tail and a slightly less obscene-looking bottom than the mandrill (if you ignore the rather prominent, blue dangly bits - I won't be drawing them): 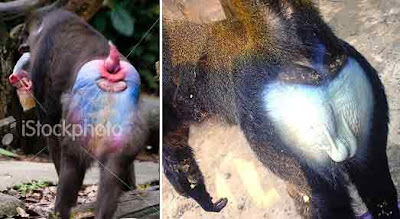 So we decided to change again and use the lesula monkey. Since nobody will have heard of a lesula, we are going to just call him Monkey. This was my first sketch of him: 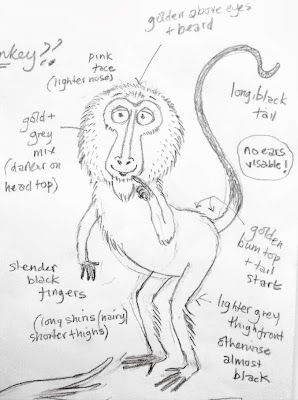 His face is equally as funny as the mandrill's, just in a different way - sort of weird, with hauntingly human eyes and a puff-ball head: 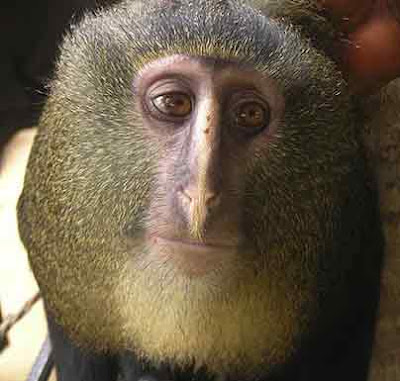 After a few more drawings to better develop his character, this is what I think he is going to look like in the book: 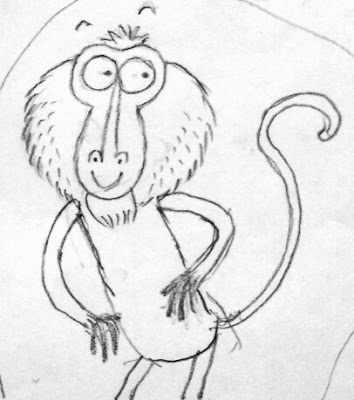 Great post, I do love to hear how characters are developed for books. And anything to do with monkeys is always a plus for me.

The last monkey does have very human eyes. So just what words did you use for your research.. I bet you got some odd results!

Ha ha. Luckily, because I also used the word 'monkey' I got away without the shock of that! I once had to research images of the window cleaning cradles they use for skyscrapers. 'Window cleaner' brought up one or two surprises!!

Now that subject would make a very interesting school visit discussion - the monkey's bottoms, not the window cleaner research.