A Day-in-the-Life of a Construction-Site Manager


Remember back in the summer, I did a project with York University, looking at what architects do all day? Well, the researchers were so pleased with the results, they asked me to do another, similar project - they wanted to carry on to the next stage of the building process and look at what happens when the plans get to the building site. 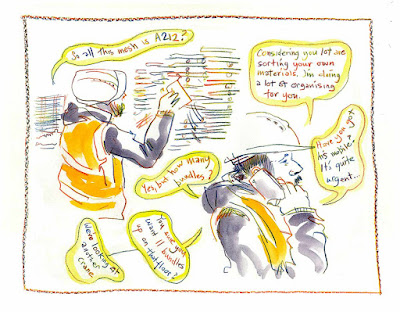 We did it the wrong way round really: I was slightly dreading having to sketch outside in November weather. I took lots and lots of layers with me. As it turned out, we were very lucky. It did rain on us right at the start, but it was a very mild day for the time of year and not windy at all. Phew. 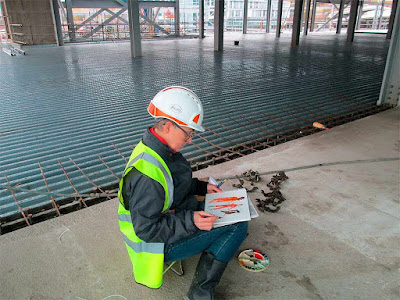 The site was a massive development in the centre of Rochdale. We had to start at the crack of dawn, because we needed to be on site for their start of day, which meant staying in a hotel in Rochdale the evening before and getting up and out so early that we missed the cooked breakfast! Damn. This research-sketching work is always so interesting though, I didn't really mind. 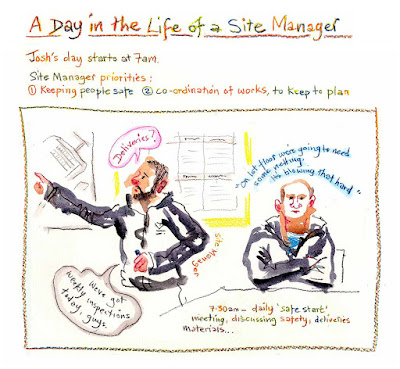 Come 7am, I had already checked out of the hotel with the researcher, Chrissy, and we were trailing our wheelie-suitcases through the still dark streets of Rochdale in the rain, following Google Maps. The site soon loomed up - it was so big it engulfed most of the town centre. Luckily we were given a brew as soon as we got on-site, then we were kitted out in the obligatory big boots, reflective jackets and hardhats. Amazingly, they found some in my size. 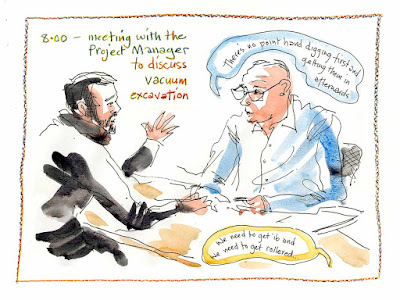 Basically, Chrissy and I shadowed Josh, the Site Manager, throughout his day, with Chrissy scribbling everything he said and did in her notebook, and me painting and drawing what I could capture. It was even more fast and furious than I'm used to. The indoor meetings were okay but, once we got outdoors, Josh was moving back and forth between different contractors on different parts of the site and hardly stood still for a moment, so the sketches got a bit rough and ready. 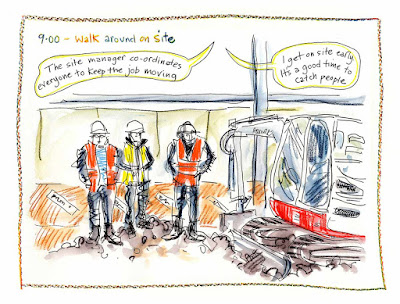 I loved trailing around behind Josh all day, finding out about the different elements of his work. It seemed pretty stressful stuff, with so much responsibility. He was basically keeping an overview and trouble-shooting, to make sure the right things were happening in the right way, and that all the different contractors could do what they needed, without being in each other's way. 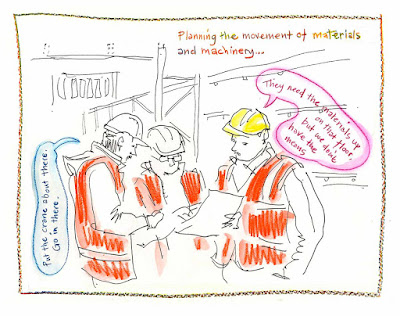 And it was brilliant getting access to the site. Much of it was still big holes in mud, but there was one building starting to go up - just iron girders with basic stairs and floors in place. The dark section you can see in the photo below is the beginnings of banked seating for a cinema screen: 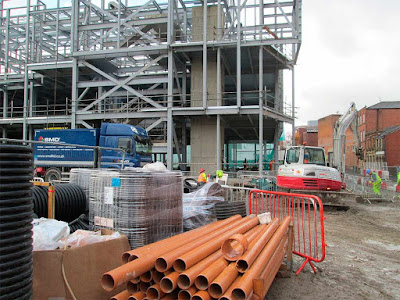 We went up a few floors to talk to welders and scaffolders. Sparks occasionally fell like fireworks from the other side of the floor above and large areas were shrouded in a green netting, which Josh told us was because they were spraying the girders with fire-resistant paint and they didn't want the paint drifting out over the people and cars below. 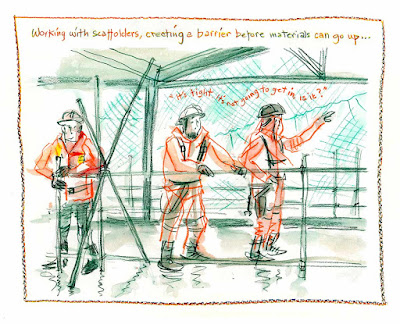 The construction team were really easy-going about being drawn. The men outside, in particular, were far too busy to be bothered, although one man kept asking me if I would do a drawing for his girlfriend! 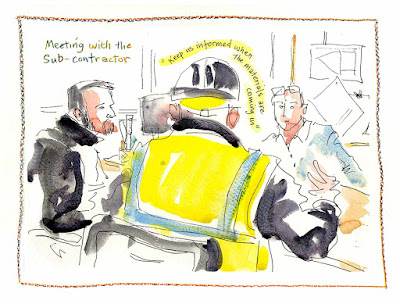 We went in and out, moving backwards and forwards between meetings with managers of one sort or other in the nice warm site office and the much briefer catch-ups with different men on site, sorting out issues. 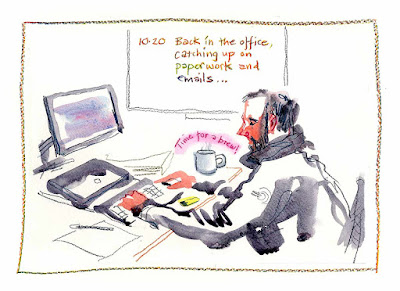 It was handy for my purposes that Josh was reasonably distinctive-looking with a beard and slightly prominent ears, so he was easy to pick out in the sketches. Useful too, that he was fairly young and attractive, so I didn't have to worry about not making him look fat, balding or ugly! It can be a slight issue if you are drawing the same person over and over. 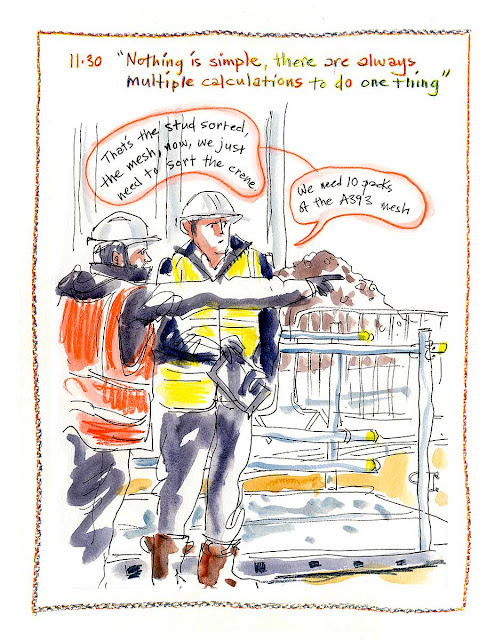 Some of the text quotes were recorded as I went along, particularly the indoor meetings but, on the whole when we were outdoors, it was so challenging that I was struggling to capture just the visual elements, so there was no way I could get text too. That's why there's been a gap of a month between me doing the sketches and finishing the work - I had to wait until Chrissy had extracted some suitable quotes from her mountains of notes, before I could add them in (an unenviable task). This was the system we often used in Australia and we had the same problems with it drawing things out somewhat, but sometimes it is the only way. 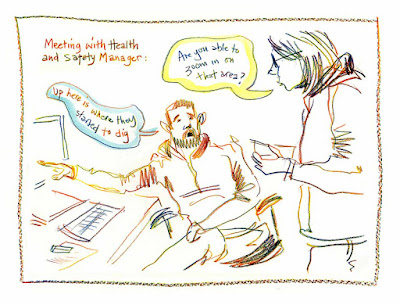 Because it had been such an early start, and because I still had a long journey to get back home to Sheffield, we cheated slightly and didn't stay until the end of the day. By half way through the afternoon, we had more than enough material. 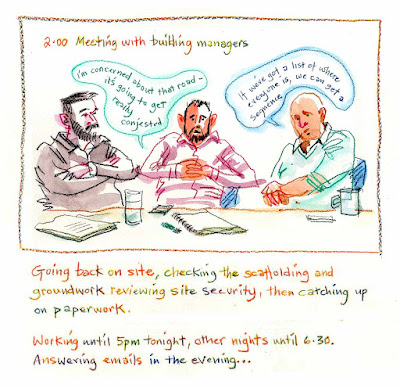 Back in York, Chrissy and her team selected eleven of the A4 sketches from eighteen I had created. When they had given me the bits of added text they wanted to include, I scanned everything and laid things out in the same rainbow pencil boxes I'd used for the architect project.

This day was all part of a much larger body of research, Buildings in the Making, about how you create buildings which are truly fit for purpose, how healthy they are for us and how buildings we work and live in make us feel. The researchers are mostly interested in the issues around architecture for hospitals and care homes. This work is linked to the residency I'm currently doing on Cystic Fybrosis clinics in hospitals - it's the same research team.

The university will use my sketchwork as a way to interest different parties who are not going to engage with turgid academic papers. Sketches are a very effective way of getting people's attention and are a great conversation starter, with the ability to communicate ideas swiftly in a way that anyone can grasp.