Getting Excited about Textiles 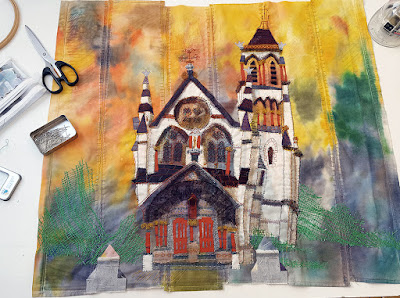 It was ages ago, way back before China, that I started my exciting new journey into the world of textiles. It's funny how things work out. After doing a textiles degree all those years ago, but becoming an illustrator immediately after graduation, I have found my way back. I am really very excited about the possibilities which I am discovering, for pulling on both my illustration and urban sketching work, but producing this brand new kind of outcome. 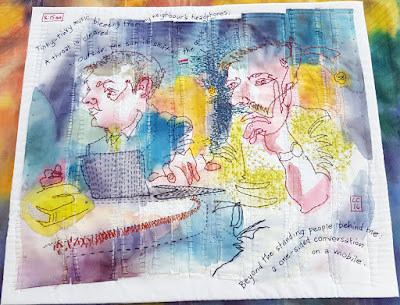 I finished my initial piece, the commuters, a couple of months ago. I was pleasantly surprised at how well it worked, as a first attempt in a completely new medium. I learnt a lot doing it: approaches which worked and ideas for things which could have been done better. 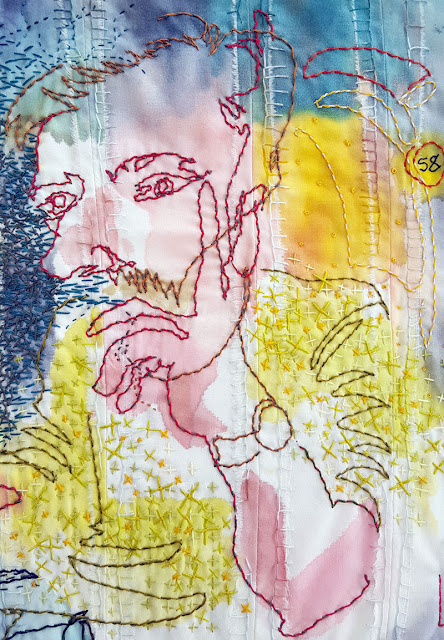 My second piece has stepped things up considerably, in terms of complexity. Once I had a feel for how line-work could be hand-stitched and had begun to realise the potential for creating pattern and texture with different types and weight of stitch, I was keen to explore further. I wanted to combine this with an idea I had for interpreting the soft, imperfect marks made by my watercolours, using layers of sheer fabrics. 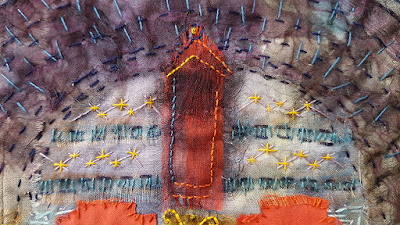 I am using synthetic organzas at the moment, which have a slight lustre to them. I didn't know that when I chose them, as I bought them online, but it has turned out to be an interesting additional texture. I really like the peculiarly 'hairy' way they fray too. 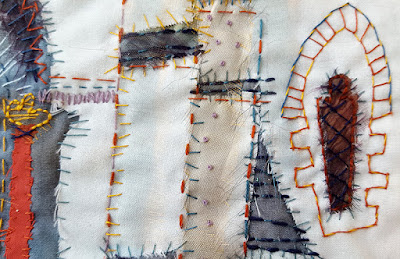 One other big difference from my initial piece is that I decided to work onto colour, rather than white, and collage back the white where I needed it. I created the coloured base piece by hand painting dyes onto the fabric. Impatient for them to dry, I blotted them off with newsprint and achieved another, accidental, but lovely, texture. 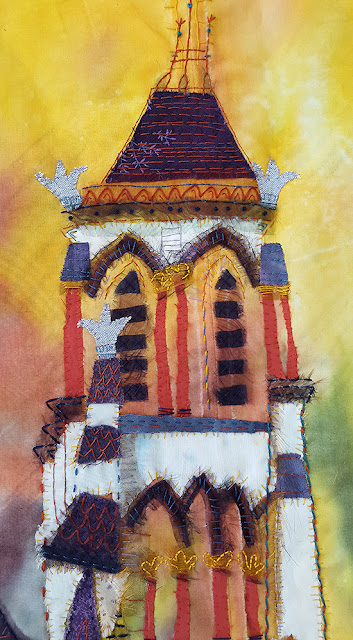 The layering is allowing for yet more experimentation with the stitching, because I can 'dampen' stitched areas with fine overlays, allowing for stitches to overlay one other without getting so visually messy. 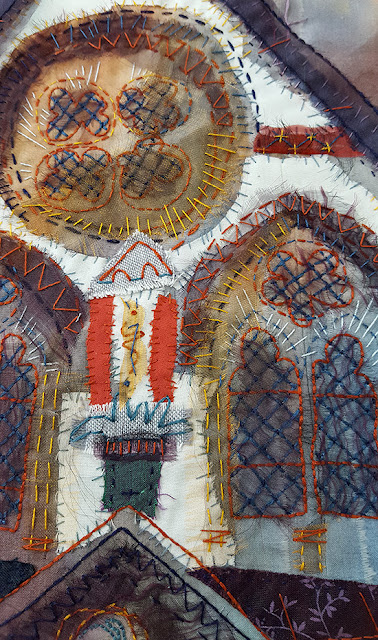 I am working from a sketch of a church in York, which I did a while ago now, but have always liked. It was done quickly so, like my commuters drawing, has a lot of interesting simplification and stylisation happening, which I did instinctively at the time. This helps a lot with the further interpretation process. I enlarged it in Photoshop and quickly added some of the missing extremities (as usual I drew slightly too big and so cropped the top and the bottom off): 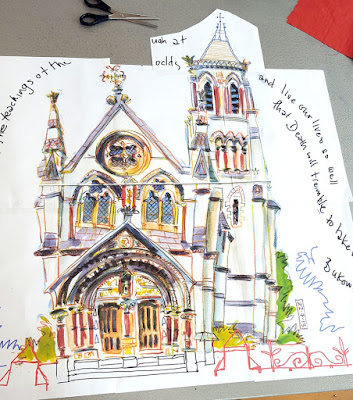 I am still not quite done. There are foreground elements to be added - mostly the iron railings, plus text and added tone to the background. I am currently securing the greenery: a wonderfully textural piece of plastic mesh sacking which I found on a beach once. It's a lovely addition, but a nightmare to sew, as I have to secure every junction with a tiny stitch, because it's so loosely woven and the plastic strands slip out so easily. 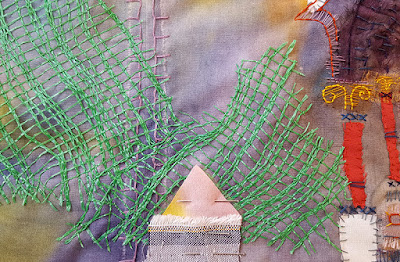 Luckily, I am free of other work at the moment, so am enjoying more sustained periods on this project. I'll show you when it's finished. 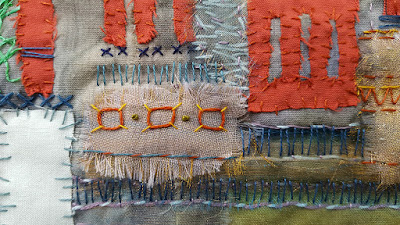 Although I read every blogpost of you I never commented one...
Sorry! They are so interesting and often inspiring (I don't know how to spell this word....)
I love what you are showing here - as always :)
And it's great fun to see that you find always new ways to live your creativity
and art.
Ciao Beo

What lovely feedback - thank you so much Beo :-)

I love this - it's stunning. Can't wait to see it completed. As Beo said, I read every blogpost but rarely comment, but I love your work and find such pleasure in your illustrations and sketching style. This textile work is another visual feast for the eyes - thank you. Alex

Thanks for sharing. Love your work! I switch between making drawings and working with textile, always looking into combining the two, and now I learned another way. (see http://bit.ly/2h1vMfJ
http://bit.ly/2i62rOV
- sorry, only in dutch)

Thanks so much Alex / Patricia. It's good to hear that people are reading and enjoying what I'm writing about.

Sorry Patricia, but I can't make your links work. Tried pasting them in, but I get error messages. Do you post your work on Facebook or Instagram?

Cheers Pat. Glad you like how it's coming along :-)