Here are a few more of the sketches I did while in Beijing. Yes, I know, you're fed up with hearing about China now, but I just wanted to show you these last few sketches before shutting up about it. On my last day, I got up really early and visited another park. It ran alongside a river, so you got a good uninterrupted view across the water to the skyscrapers of central Beijing. It was quite misty, as it was another 'pollution day'. 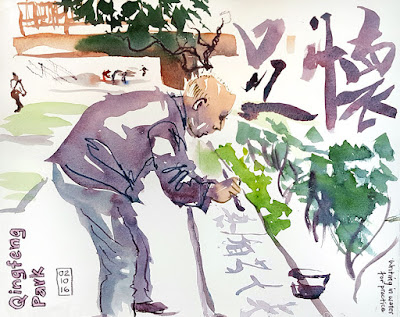 There is a lot of life in Chinese parks at 7.30am. I found a man practising his calligraphy. there was a low wall which ran throughout the park. He painted on it in water. The beautiful signs snaked all along the wall, beside the many pathways, slowly drying. 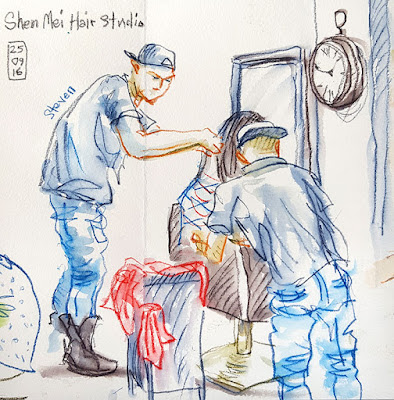 I love watching people going about their business. On another day, Julia and I were hanging about, killing half an hour before being picked up to move hotels. There was a trendy-looking beauty salon along from the hotel, so we went to nosy. I ended up whipping out my Inktense pencils and drawing their hairdresser. It was another of those lovely occasions where we got to' talk' to everyone, then we had to rush off.

This drawing was done on our last day, after my early morning park visit and before going for the Hotpot meal:

While we were in England, Julia discovered that there was an English bookshop in Beijing called Bookworm and that they did storytime sessions on Sunday mornings. So she made contact and offered to read. I wimped out - I decided I wanted to spend my last day doing fun things, not working, but I ended up going along anyway, to support Julia. So, since I wasn't working, I sat in the audience and sketched her in action. It was amazing: a huge success. Julia's popularity totally took the bookseller by surprise. They couldn't cram another person into the space and they sold out of our books really quickly. 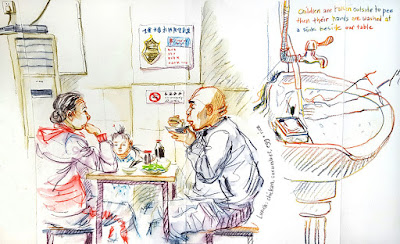 The sketch above was a lunchtime stop on our tourist day, visiting the Temple of Heaven. There didn't seem to be anywhere to eat within the park, so we nipped out and found this restaurant. It was extremely basic, but very 'real', full of ordinary Chinese people, which I love. Once we had scoffed our meal, I drew this family opposite, and the basin behind Julia's chair, where people washed their hands. 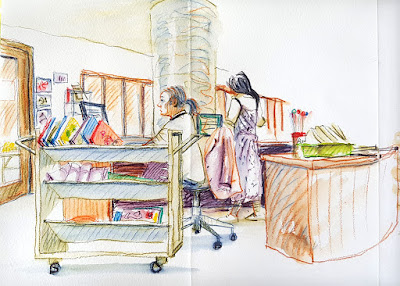 Finally, this is the library in Keystone Academy, where I had a bit of a wait between illustration workshops, so decided to draw, so that I could show it to the children later that day and prove that I really do draw every day.

What a wonderful way to travel. Inspired by these posts I acquired a sketch pad and some tools some time ago now ... but have yet to make a mark. Maybe I just like poring over your blog.

Candy: that's great news. The trick is to get a few pages drawn on straight away, to get it out of the way. You should try to put the focus on the enjoyment of the exploration, rather then the success of the finished product. One good way to kick-start this way of thinking is to fill a few pages with 1 minute blind contour drawings of yourself or groups of simple objects on a table (scissors, glasses, biro...). That gets over the horrible BEGINNING OF A BRAND NEW SKETCHBOOK thing. Stick your pencil through a 4cm sq of scrap paper, so you can't cheat.
Then play around, colouring in the negative space: that's much easier than painting the object, as you can't do it wrong!

HI
I'm sketching for the web page on Children's Literature. Some of my works were published in the Illustration for Kids journal.