Yes, despite all this glorious, sunny weather of late, it poured down all day this time last week, for our SketchCrawl. At least it was still warm. I wore strappy sandals and waded my way through the streets of Manchester.

I seem to have an uncanny knack of picking the only REALLY rainy day of the month for our SketchCrawls, surrounded by beautiful, sunny days. June's squelchy day in Buxton was exactly the same, and so was our May outing, the last time we were in Manchester. The forecast was so awful, I nearly cancelled this time.

I'm so pleased I didn't. About a dozen of us had a fantastic time and, in dodging the torrents, discovered some rather special, hidden spaces. First stop was the library, chosen mainly because it was actually open at 9.20am. Mostly it was a bit BIG and so quite hard to draw at that tender hour. So we just did a 30 minute warm-up, then sploshed our way round the corner, to the cafe at the Town Hall. 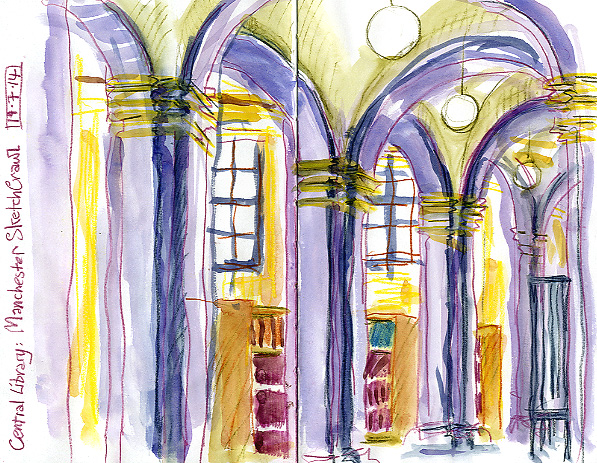 I discovered the The Sculpture Hall Cafe by chance, while researching whether we were allowed inside the Town Hall to sketch. It totally lives up to its name. Under an amazing, vaulted ceiling are leather sofas and tables draped in white linen, and its all watched over by the statues. A beautiful, very unusual place. 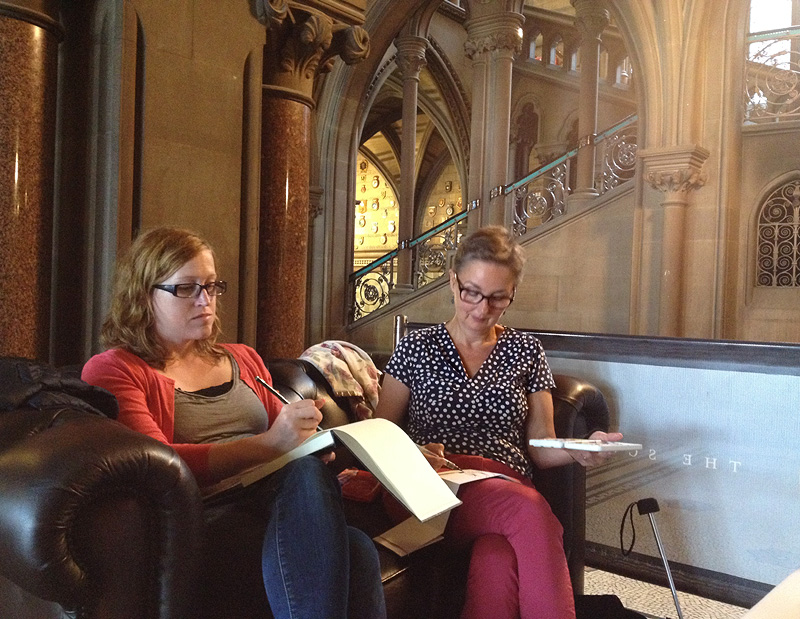 I decided I wanted to fill my mini concertina sketchbook, so did this series of sketches across a couple of pages:

Next stop was the Royal Exchange Theatre. I'd never been. What a surreal building! The traditional, and very lovely, Royal Exchange building, with its marble columns and gigantic circular windows above, is huge, like a cathedral, so big it actually encloses the ultra-modern theatre. It looks a little bit like an alien spaceship has teleported in! Apparently, the floor wasn't strong enough to take the weight of the new theatre, so they created this mad set-up to transfer weight through the columns.

I managed two drawings before we stopped for lunch. I really loved the three giant roof windows, so tackled a part of the central one: 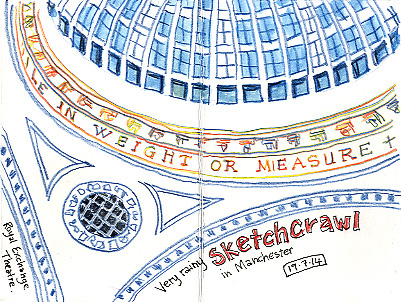 I didn't think there was time to sketch the modern theatre, as it was visually pretty complicated, but I was struck by the contrast between old and new, so took a section of the view from where I was sitting, which incorporated both elements: 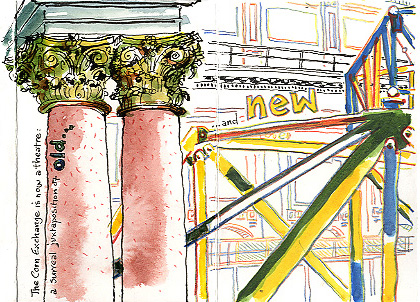 I didn't sketch them separately like this though. I carried on in my concertina book, so the end result was the long thin sketch at the top of this post. 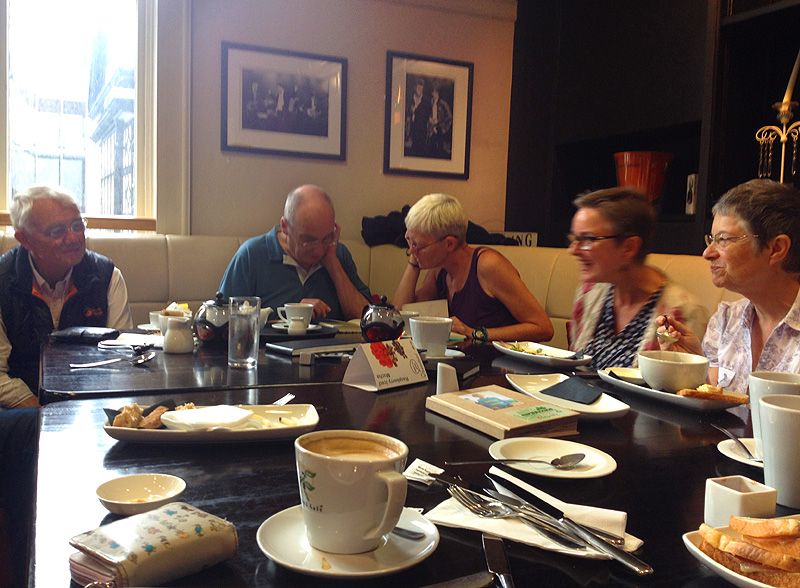 We lunched in Waterstones - cheap and cheerful (and big enough for us all to sit together). Stephan was showing us his Pentel brush-pen and let me have a try-out. It was lovely and fluid to use. I did this quick sketch of Mike: 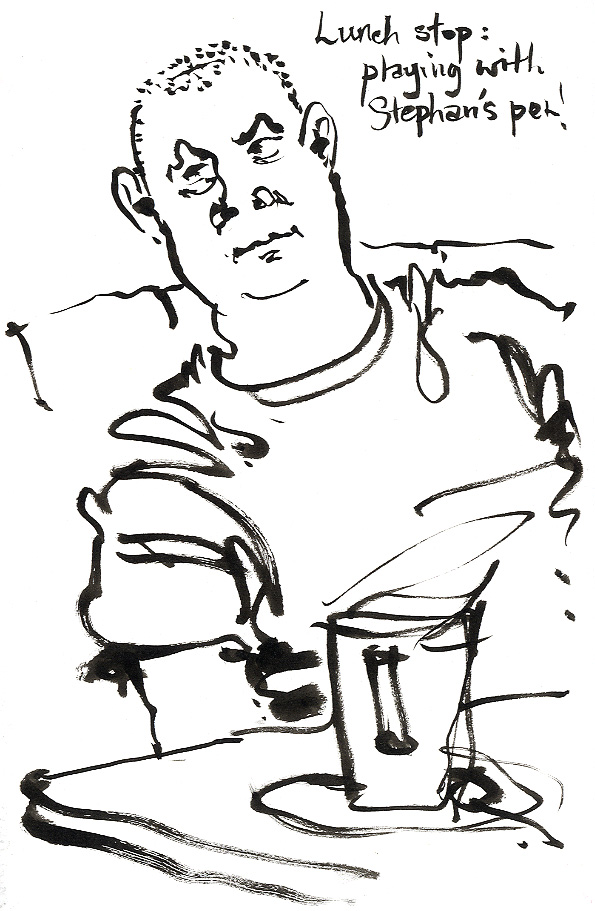 The afternoon was spent at the John Ryland's Library. I had really fancied drawing the outside (it's a wonderfully Gothic building - dark stone and very twiddly) but no chance: still pouring. Luckily the inside was good too.

I had never been before but Lucie knew where to go - she took us straight to the Reading Room: 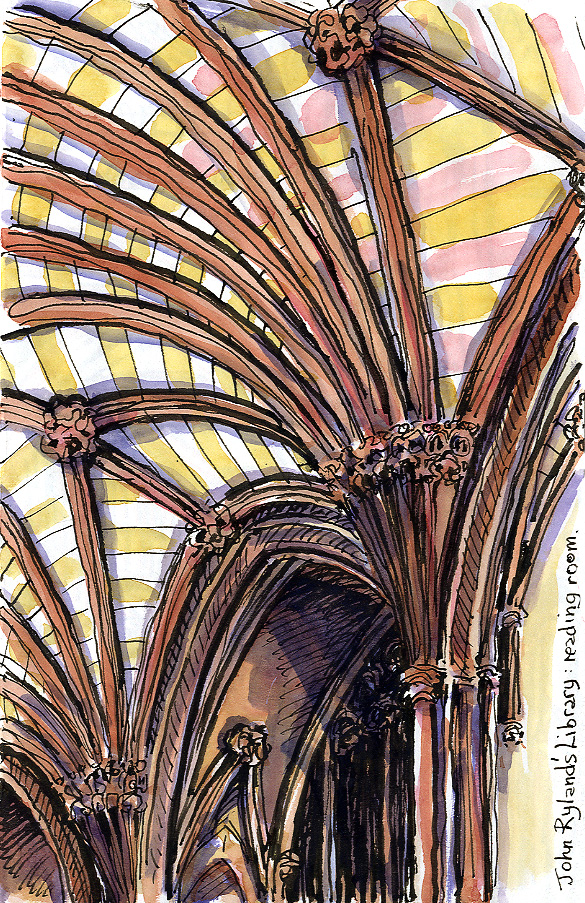 It was designed by Basil Champneys and is a mass of decorative detail. The space feels very like a church, with stained glass windows and another extraordinary vaulted ceiling. Like in a church, everyone was whispering and it was very peaceful, until someones mobile phone went off and played a silly tune VERY loud: 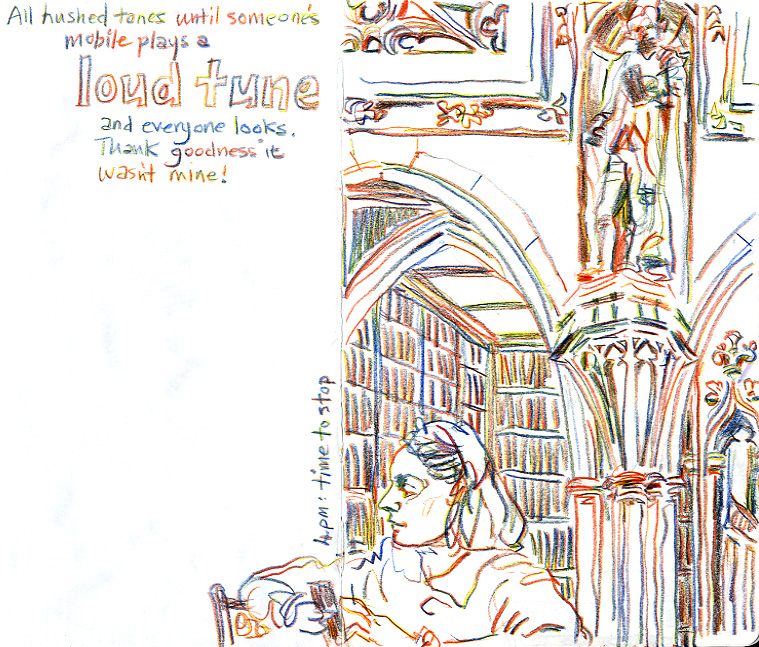 By lucky chance, there was an exhibition of Urban Sketching on in the Reading Room: a collection of really evocative drawings of the city, by the Manchester artist Anthony McCarthy. 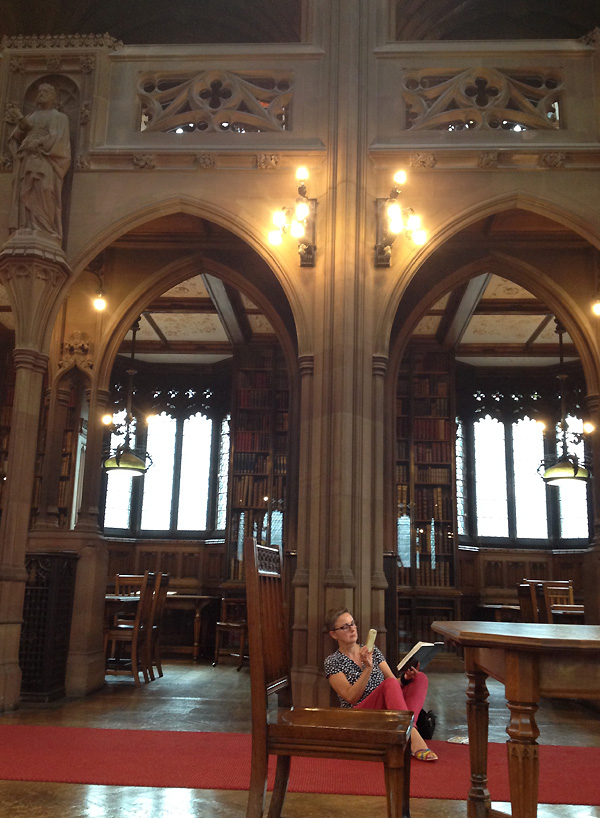 We did the sharing session in the Ryland's Cafe - part of a modern wing, added during the recent restoration of the building. There were several new members again and it was so lovely chatting about what we all do and looking through the sketches. Here's me being very proud of my concertina sketchbook: 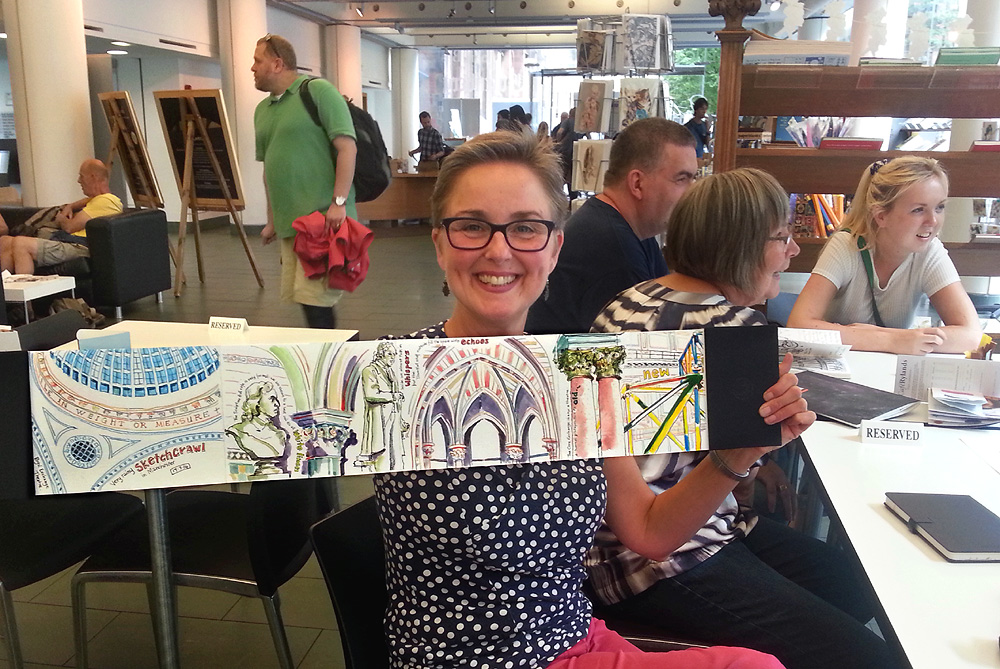 Oh, and guess what? The sun came out and the rain stopped, just as we finished our drawing time and started the sharing. Typical!

At least I got to walk back to the station with Stephan in lovely weather. I travelled back to Sheffield alone, so did my usual on the train: 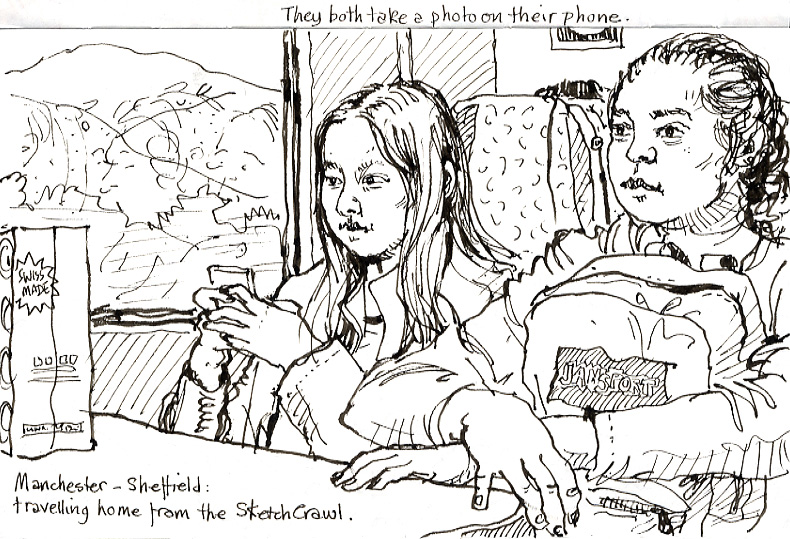 Another great day out with smashing company. Thanks to everyone who came, especially given the weather conditions. If you'd like to join Urban Sketchers Yorkshire and come out to play with us sometime, just drop me an email or join our Facebook group.

I can't believe you managed to find a wet day to be back over here! I can highly recommend coming back to watch a play at the Royal Exchange, it is my favourite theatre and everything is performed 'in the round' very cleverly