I'm finishing off the work on the first stage of my sketching people book. The two 'drawing people on the train' presentation spreads are all done. 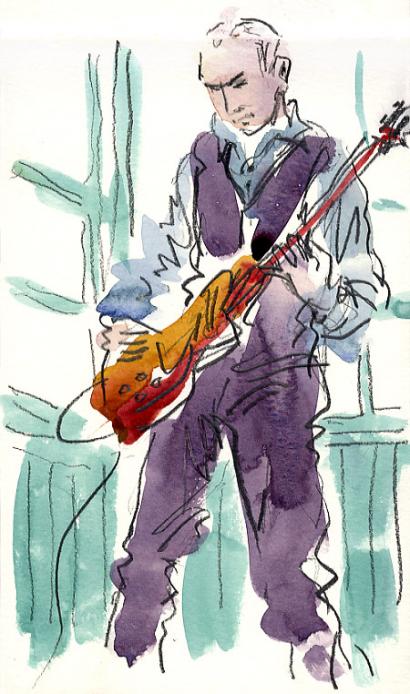 I have been working on the spread 'using colour first, line later'. One of the things that has been quite tricky is that I've had to do a step-by-step set of images. My publisher felt it was useful for the reader to see one of my sketches built up in stages. Trouble is, the very nature of them is that they are quick and instinctive. I tried to sketch John in the garden, but it was a nightmare. After each paint mark, I needed to go upstairs and scan my sketchbook, before coming back down to John for brush-mark two, then back up to the scanner again, and so on. Because of the palava, I felt under terrible pressure to get each mark right. Well, there's no better guarantee of failure than that.

So I gave it up and decided to create a mock-up, repainting an existing sketch. The guitar-player at the top was done a few years ago, but it's a good example of the technique. I created a print-out to trace on the lightbox in paint.

I scanned it in 5 stages. The line-work was the hardest. Trying to draw as if you are drawing quickly and intuitively, when actually you are copying, is a bit like trying to forge a signature (I don't make a habit of that, honest). 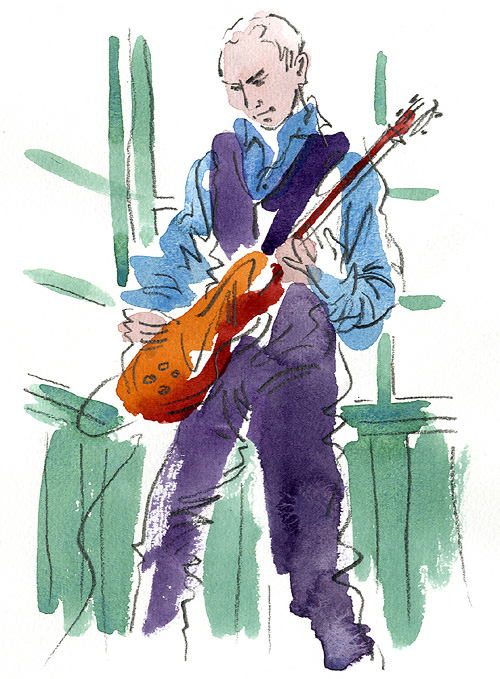 It didn't turn out quite the same as the original, but near enough and it does the job. Phew.

I was looking forward to the whole book being instructional like this. What is the book going to be like?

Hi Carol. It will definitely be instructional, with a few step-by-step elements and various guest artists, showing how they work too. I will also be giving lots of guidance on how to sketch in particular situations and when there are difficulties (eg drawing moving people), but it isn't going to be a traditional 'how to draw' book. Having said that, even where it is featuring the archive work from my sketchbooks, I will be analysing the various techniques used for you and explaining why I have worked in certain styles / media etc

Thanks for your reply! I am still looking forward to having this book!

Thanks Brenda - all publicity is useful :-D

Can't wait for Paraty - see you there!

I love sketchy work, but to date I have not had the courage to submit anything sketchy as a finished piece.

It is interesting that you apply colour before line. I have always sketched first with a pen and only if the sketch was worthy enough did it get a splash of watercolour.

Just submit your illustration and get paid 50% royalty for each file downloaded.

You should have creativity along with their technical skills and natural artistic ability to draw or paint to create pictures that communicate ideas, facts, sensations, feelings and emotions.

We require exclusivity for the images you submit hence you can't submit the same concept/image to any of the microstock websites.

If you are interested in becoming a contributor to our ever growing creative collections, you will need to submit your few creative images or your can send your online profile link at creative@imagesbazaar.com which will be reviewed by our content team.

At present, over 7000 clients in more than 45 countries are using images from ImagesBazaar for their advertising and marketing communication.

ImagesBazaar offers an immense advantage with its vast database of images that are reflective of India, making them available in the most accessible way. From contemporary Indian imagery to the broadest range of categories depicting Indians in virtually all walks of life, age groups and expressions.