Evolution of an Idea: Creating a Cover Illustration

I managed to get all my 'cut-outs' done in time (phew) and the book's mock-up will be in production at Gullane as we speak, ready for presentation at the Frankfurt Book Fair, to try and hook interest for as many co-editions as possible.

But I had yet another cause to put my pastel artwork on hold: a cover design was needed too. We often leave the cover design to the end - I am more familiar with the characters by then and it's easier to get a feel for what would work, once you can see the rest of the artwork. 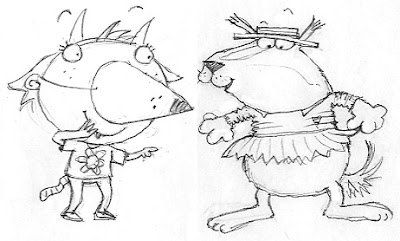 Anyway, I needed to come up with something in a hurry. I felt both characters needed to be on the front, but nothing much else (apart from the title etc, obviously), to keep it punchy. I did the sketch above as a starting point, but felt it needed more humour, so thought I could use the dog food problem to make things more funny. The ice-cream seemed to work well for Sparky and I tried out 3 alternative versions of Lucy:

One fundamental problem though, is that two characters side by side create a very landscape-format illustration, for what is a portrait-format cover. That means they would ultimately be quite small in the space.

My Art Director suggested I move them closer together, having them hugging, which would help the format and also make it a warmer relationship. 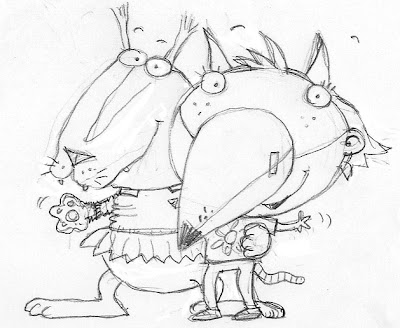 Trouble is, Lucy has a very wide head, so she can't easily get close without eclipsing Sparky, and his long nose has to face away from her, or they'd collide. Plus, his school uniform begins to disappear behind her and it all gets a bit visually confusing.

'We need a more graphic approach,' said my Art Director. So I played with having the characters poking in top and bottom, using blocks of colour to hold them in place and break up the space. John suggested the curly shape below and the idea that the title letters could swap colours with the background shapes, to echo the theme. 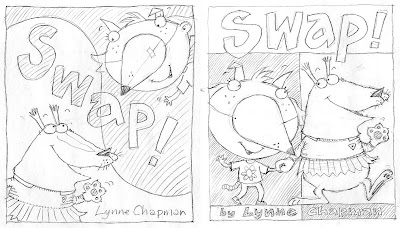 Then I had another go at bringing the two characters together, keeping the colour-swapping idea, but using hand-holding instead of hugging. I also tried a slightly simpler version of John's idea then sent these three designs back to the Art Director. 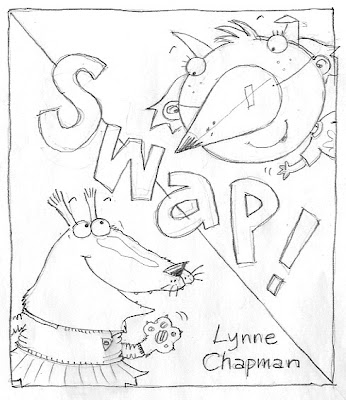 She liked the third, simpler one best, but said it needed more humour, rightly pointing out that, unless you've read the story, Sparky could be just another animal wearing clothes, as they so often do in picture books: people might not get the 'swapping' idea and so Lucy's nose would just be confusing. She also preferred Sparky's ballet outfit to the school uniform.

I had deliberately shied away from using the ballet costume on the cover, since I discovered Dogs Don't Do Ballet: Sara Ogilvie unfortunately uses a very similar outfit. But the ballet costume did offer more scope for extra humour. I managed to squeeze Sparky's foot, with Lucy's tiny shoe, into the picture then looked on Google for other children's ballet accessories and found the tiara. Just to be on the safe side, I gave Lucy a bone, to underpin the idea that she is supposed to be in a dog disguise: 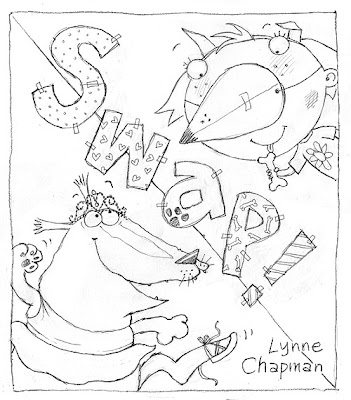 Both my Art Director and Editor loved it - hurrah!

The patchwork letters were another brain-wave of John's by the way, the idea being that they are another DIY activity, like the home-made nose. I think they make it really funky: well done John x

Interesting to see how the idea evolved and the amazing team work!!Very funny and creative cover!!You could include "the hand made nose instructions" on your website later on, for the children to print, colour and wear. It would have been nice if it was at the end of the book, but too late for that?
Now we just have to patiently wait to be out...ah:)

Fun idea Irene! Unfortunately there isn't room as we are already using the endpapers, but I could use the idea for school storytellings. It would be fun to have the whole class turn themselves into dogs! Not sure how I'd do the ears though...

So many people to please, oh my. In their defense the final piece looks fabulous.

For the ears, a bit of card and a headband see this link for tips http://www.marthastewart.com/348271/felt-puppy-ears ;)

Thanks Irene. Unfortunately I have to do workshops that use immediately available, virtually free resources, so headbands wouldn't work - got to be all paper, pencils and sellotape!

Love to see the work in progress!Your pencils are great,me too I love the third one:)