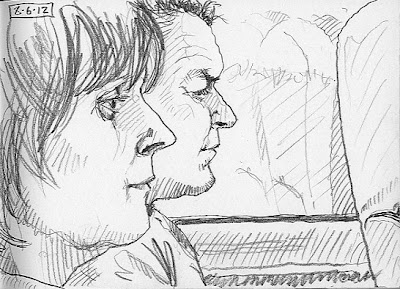 Yesterday I was in Birmingham, doing events for their children's book festival. As usual, I wanted to draw on the train. I have about 6 sketchbooks that are almost full: just a few blank pages left at the end. That's a problem though, as the chances are I will run out before the end of the trip. That's why there are so many books on my shelf like that! 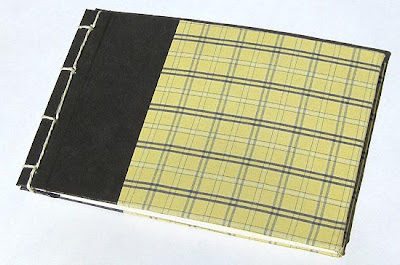 So, once again, I started a new sketchbook, only this one was a bit different: this was one I made myself. I wanted to try out Japanese book-binding as it looked simpler than ordinary binding and really decorative. So with the help of YouTube, I created this cute little thing above. It's a bit longer than an A6. I got the cover fabric by cutting up an Oxfam-shop shirt. 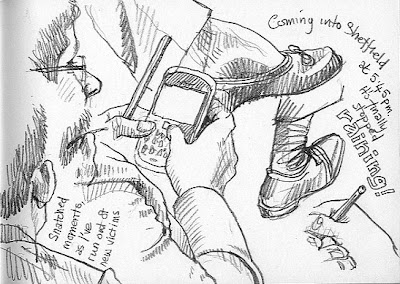 These are the sketches I did on the journey. It was rather a bits-and-pieces kind of trip, as not many people seemed to be in the mood for staying still for me. I had great difficulty on the way there, as the train was almost empty. I just had this man below, sitting right opposite me: 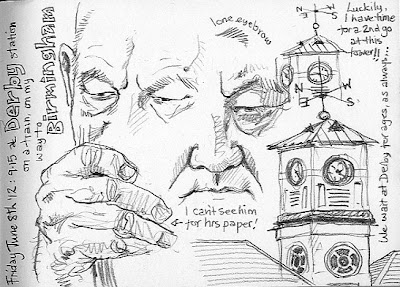 That's always tricky, as it's hard not to be really obvious, but he made it all the more challenging by holding his newspaper up in front of his face much of the time. I had to keep waiting for little glimpses and build the sketches up a tiny bit at a time! Eventually I gave up and showed him my efforts, so we spent the rest of the trip chatting, which was lovely. 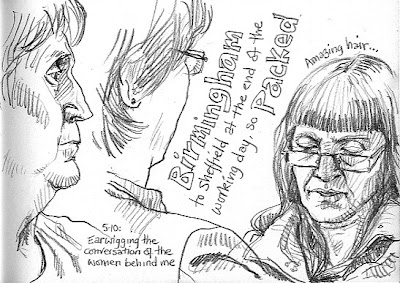 Beautiful book and love your sketches. Can you, please, share this video about japanese book binding? I wanted to try but afraid to make my own book.

Here are the 2 main ones I used:

Hi Lynne, Love the idea of making my own sketchbook, thanks for sharing. What paper did you use?

Just ordinary medium weight cartridge for now. I wanted to test whether it would open flat enough for sketching with the Japanese system, before I do an expensive watercolour paper one.

It works well, but does need more holding open once you get further into it, so ideally better at a larger size with this system I should say.

This design is spectacular! You most certainly know how to keep
a reader amused. Between your wit and your videos, I was almost moved to start my own blog (well, almost.
..HaHa!) Great job. I really enjoyed what you had to say, and more than
that, how you presented it. Too cool!
My site http://www.hcg-drops.ca