Illustrating a Picture Book: the Roughs are Finished!!!

I have been within a gnat's whisker of finishing my Dogswap roughs for a couple of weeks now, but there has been a lot of family stuff going on, as well as a few school and festival events, so I only got back down to it in earnest this week. 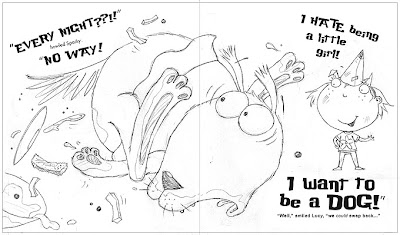 At the end of the story, after much upset, Lucy finally gets Sparky to swap back, but only when he discovers that being a little girl means having a bath every night!

There is only one spread after the one above, where they negotiate terms, which is the rough I have had sitting around half finished for a while, until I got the chance to sort it on Monday: 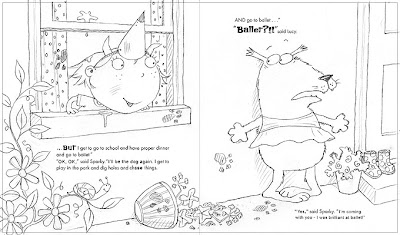 I wanted to end on a visual joke, but couldn't fully work it into that last page, as there is too much else to resolve, especially as we wanted the last spread to be a double-page image. So I've decided to use the back endpapers, where I can visualise the idea of Sparky going back to ballet, without taking up any extra room - sneaky eh?

I got those drawn up yesterday: I'll show you next time. They made me smile while I was drawing them, so hopefully you'll like them too. The big cross-fingers is the publisher though. I finally emailed the lot to Gullane at 7.30pm last night. Wish me luck!

Lynne,they look great!The story is really funny! Best of luck!Hope you will get the "go ahead with the pastels" soon, can't wait to see them in colour!!