A Day in the Life of an Architect

So what do architects do all day? To be honest, I wasn't really sure. 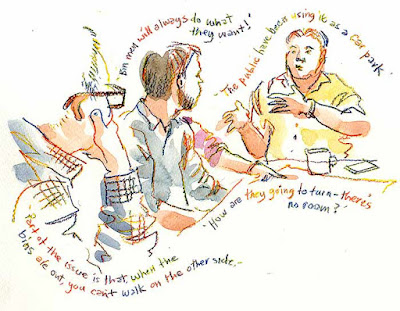 I know they design buildings and spaces, probably more on a computer than at a drawing board these days, but that's where my knowledge stops. Or stopped. Last week, as it happens, I got the opportunity to find out, first hand, and I took along my sketchbook, naturally. 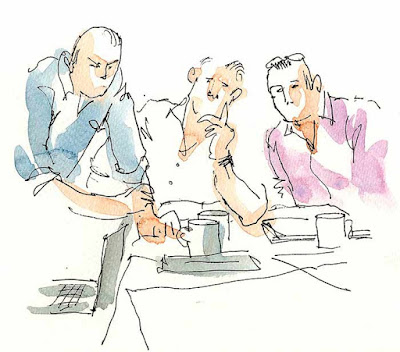 I had been commissioned to create an illustration for a final project report, by researchers at York University. The project analyses and discusses how care homes are designed and built, and why. The researcher who contacted me said she would like an image which gave some insight into what an architect did during a typical day. 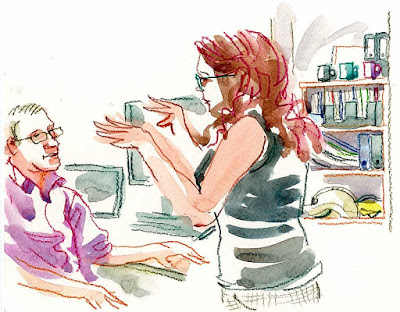 I wasn't that happy about doing it though, because I didn't want to draw it from imagination, since I had no clear idea what they do, or what their environment might look like. I said the drawings would have much more of an authentic and natural feel if I was able to see and draw an architect actually at work. So the researcher paid me to spent a day at an architect's practice near Selby. Perfect. 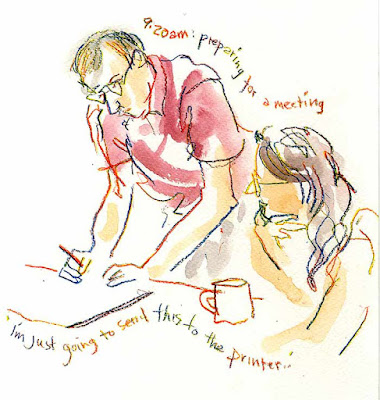 They were tucked away in the grounds of a stately home turned hotel, pretty much in the middle of nowhere. It was quite a journey to get there. I arrived just as people were preparing for a big meeting. My job was to shadow one particular architect, April, and sketch her activities through the day. 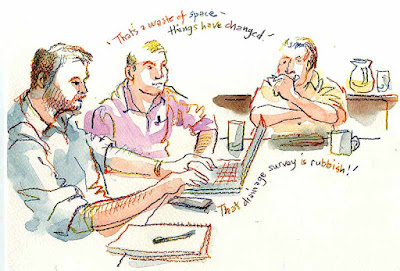 The meeting was really interesting, with about a dozen people around a big table, discussing a project which was obviously in the early stages of development. 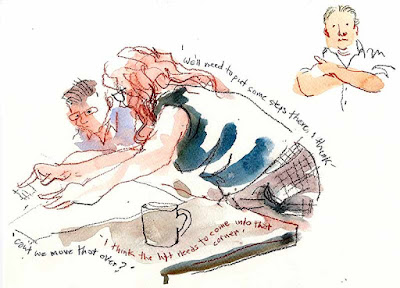 It was very animated, with lots of back and forth, pointing at drawings and making changes to plans because of various problems. It was much more tricky to capture than all those meetings at the Morgan Centre, where people mostly sat and listened, but I did my best. 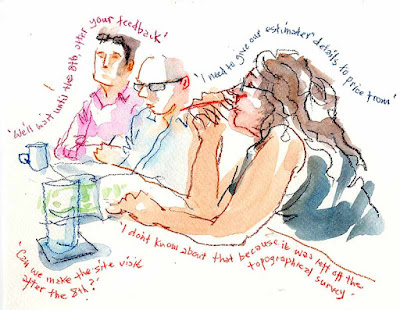 After lunch, April went back to her desk to work on a drawing for a different project. She showed me a print-out of a long building which the client wanted to appear like a terrace of buildings. 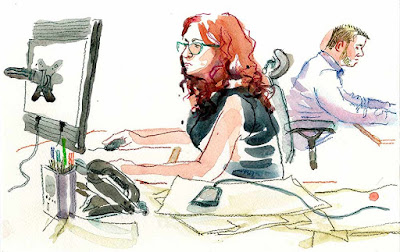 Her designing was indeed mostly done on the computer, but she did also do some hand-drawing, working things out. She felt that the shapes of the ends of the building needed altering, to make the overall effect more attractive, but this had knock-on effects to the footprint of the rooms and the roof-line. So she sat and sketched for a few minutes: 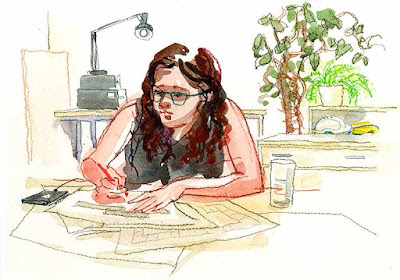 One of the surprises for me, was how much collaboration went on. The office was a large, open-plan space. But although individuals had their own, quite spacious work areas, people often got up and went to chat things through with each other. 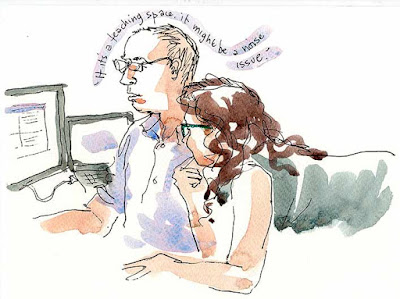 So it was a far more sociable job than I might have anticipated. It seemed like fairly high pressure though. 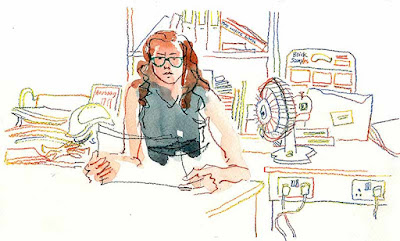 I was pleased that I managed to capture quite a few different elements of the work. What I have to do next is find a way of putting together a selection of the sketches, to create a montage. 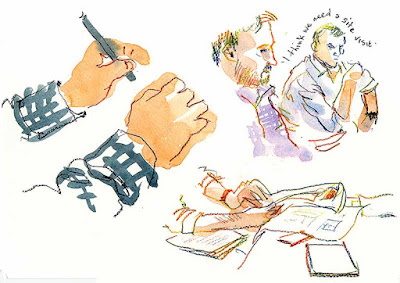 The final illustration is to be a double spread, so two A4 sheets. The York researchers are going to have a meeting tomorrow, to chose their favourite images from everything I created and to let me know if there is any additional text they want to incorporate, then I have another day to fiddle around in Photoshop and bring things together. What an interesting project it has turned into. 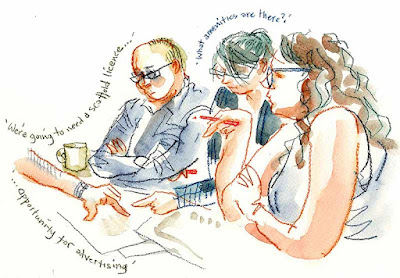 You can see many more similar reportage projects on my website here. If you want to discuss a future project, contact me here.

interesting to understand the social element

Hi Lynne I've followed your course on Crafty.com. Absolutely great I've learned a lot. Being asked to illustrate a childrensbook, I wonder if you have made outher online courses? Especialy with bird charackters - I strouckel a bit with the expression using wings. Greatings from Denmark, Hanne Marie