Back to My 'Urban Sketching People' Book

Now the mural artwork is done (phew) and I have got my concertina sketchbooks sorted, I have cleared my schedule to concentrate purely on my 'sketching people' book.

If you have been following the project, you will remember that I have a handful of spreads which are more or less finished - the ones we did as samples, to get the US edition signed up, including this painting before you draw spread: 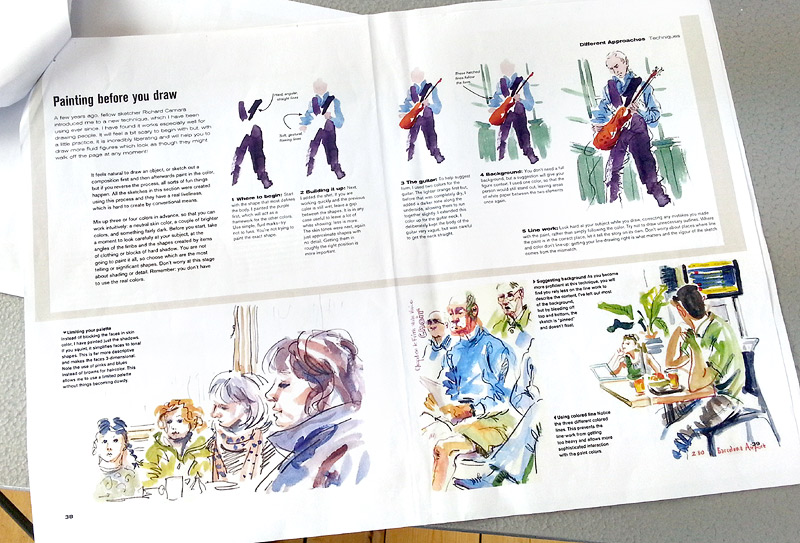 Then, at the start of the year, I sent off a good chunk of the text, along with all the images that will go with it (just photos of my sketchbook pages for now). My publisher has been working on it while I have been doing other things. About two thirds of what I submitted has now been set into very rough spreads and sent back with some suggestions for changes. I had an long phone call with my editor, where we went through everything in fine detail and I scribbled notes all over the spreads:

It's not too bad at all actually. All the text is intact without changes, it's pretty much all suggestions for either squeezing in more images or adding step-by-step breakdowns here and there.

The publisher also sent out a call for other sketchers to submit work for possible inclusion and I have sheets and sheets of gorgeous guest work to choose from. That's going to make things easier. So far, I have been trying to collect potential guest images by trawling Flickr and saving things into Pinterest. 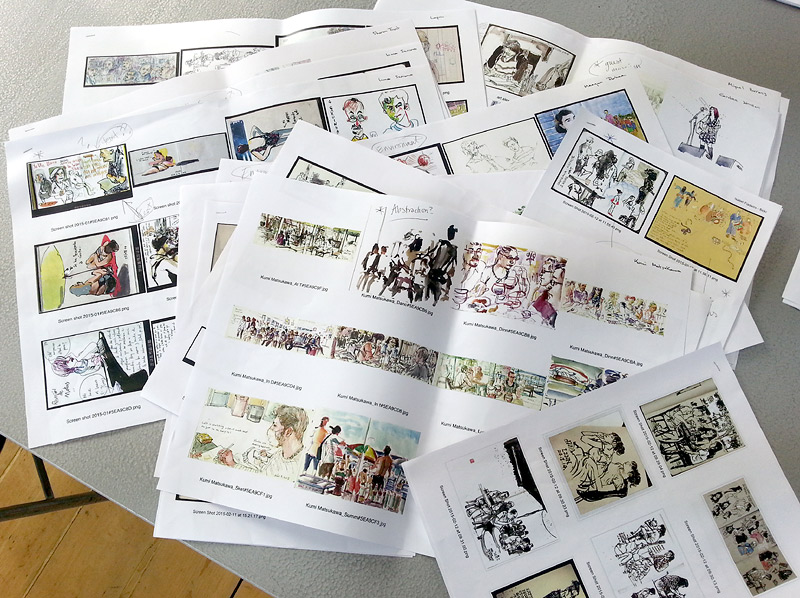 I have mostly addressed the changes now. I just have some captions and annotations to write, to go with the added images, but I'm waiting until my suggestions have been given the green light before I do that.

For now, I have moved on and begun writing a new section of the book. This one looks in detail at how to draw specific parts of the body. We did sketching the eyes as one of the sample spreads. I took a couple of days to get my head back into things, after such a lengthy pause, but I am motoring nicely now and have already written 'feet', 'hair' and 'ears'. Still got mouths, hands and noses to do. Better get on...

Congratulations!
Indeed, the book will be very useful for those who want to learn how to draw people. I hope you could finish the book very quickly because I will be one of those in line to buy it, and I would like to have a book autographed for you. :)

Congratulations, I know it will be a great success!

Congratulations Lynne! I know it's going to do brilliantly - and it's on my wish list already!

Don't worry Murilo, it won't be long: the deadline is pretty crazy, so I've no time to idle about. And yes, of course, for you, anything :-D

How exciting! A lot of work but a terrific resource and reward at the end. Congratulations!

Thanks Beth. I'm having fun writing it, and have just worked out that I am slightly ahead of schedule - hurrah!

Looks like a very thorough book, I'll be looking for it.

I read this urban sketch book and its has really good story about urban life thanks for share it grammar and punctuation software .