A Sunny SketchCrawl in Manchester

Last weekend, we had another SketchCrawl day, but this time it was a bit different. 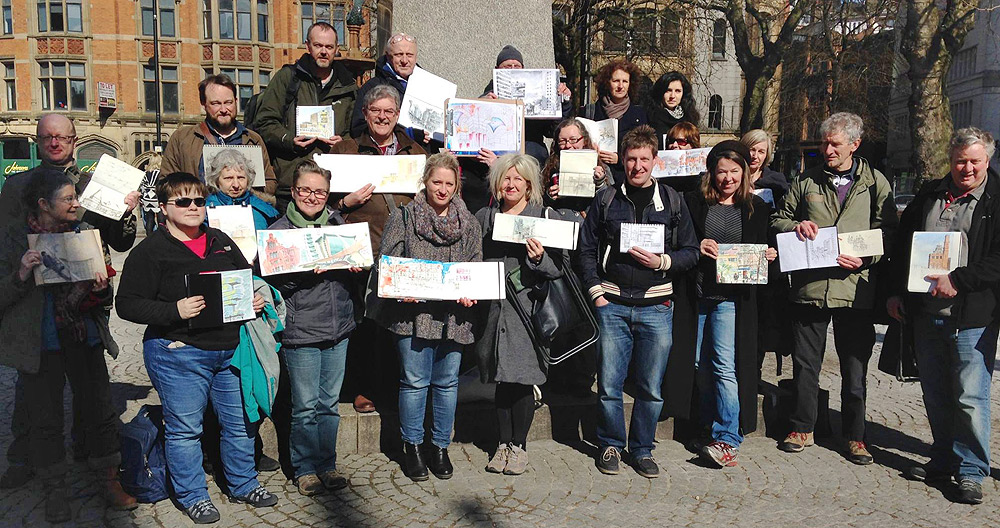 Simone Ridyard (in the centre of the photo) is my counterpart in Manchester Urban Sketchers. She set up a street-sketching day with the Society of Architectural Illustration. It seemed like too good an opportunity to miss, so sketchers from both the Usk Yorkshire and Birmingham Urban Sketchers groups also joined in.

The event didn't kick off until 11am, but I got a slightly early train and so managed to squeeze in an extra sketch at the beginning of the day. 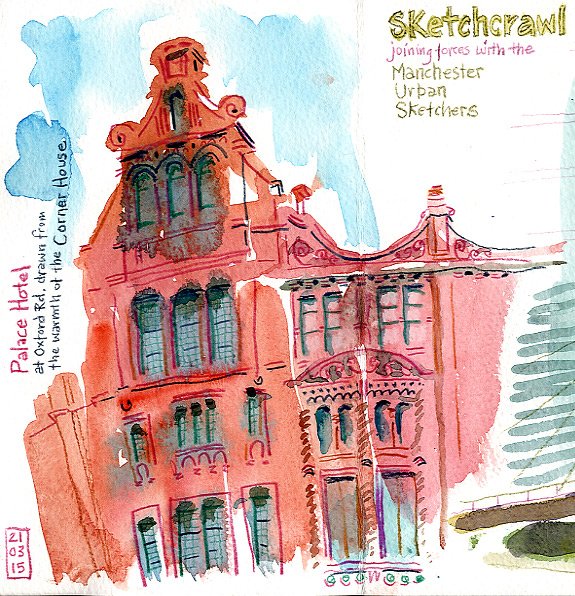 The Palace Hotel, just round the corner from Oxford Road Station, is a stunning colour, especially with the sun on its red bricks. Better still, you can get a great view of it from the warmth and comfort of the Corner House cafe, on the opposite side of the road. I passed a very relaxed 45 minutes with a sketch-buddy, then we had to hot-foot it across town to the meeting place for the official start.

A group of 20 or so people were milling about when we got there: some familiar faces, some people I had so far only met on Facebook, some new introductions. After the hellos, we split into two groups, with half of us drawing the buildings visible from Bridge Street and the others venturing down to Chapel Wharf. The modern architecture provided an exciting interplay of shapes, especially with the sweep of this suspension bridge: 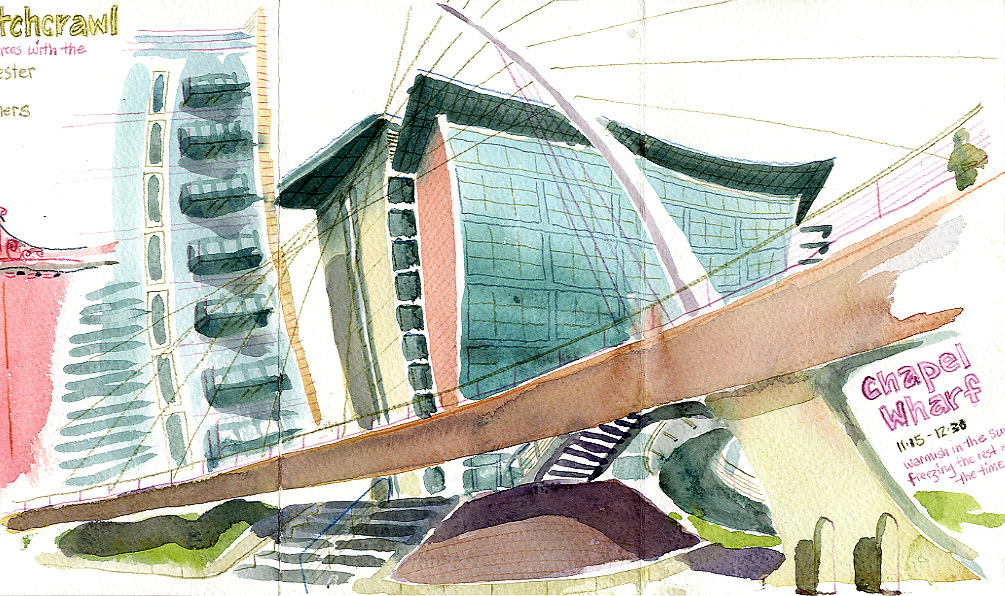 I sat myself in the sun but, unfortunately, my spot quickly got swallowed up by the shade of a tall building behind me. Once out of the sunshine, is was FREEZING but I couldn't move until I had finished my painting. Just five minutes before I stopped, the sun taunted me by working it's way back round. Typical. I was very pleased with the results though, so it was worth the pain.

I had decided to take one of my new concertina books for a trial run. You might remember that I made a test book, to perfect the technique, so I sketched in that throughout Saturday, running my sketches together. I love that the concertina format lets me keep unfolding new pages, so I can add more space as I go along. Everything worked a treat, so that's good news after all my cutting and folding and sticking (although I had a major water-bottle leak in my bag, which was nearly a disaster).

Everyone regrouped before lunch, to share the work so far, because some people had to head off. That's when we took the photo at the top. Then it was reward-time. We were too big a group to eat as one, but I went with 10 people for lunch at a fantastic Greek self-service restaurant. We were all too busy scoffing to sketch. Gorgeous food (and cheap too!). 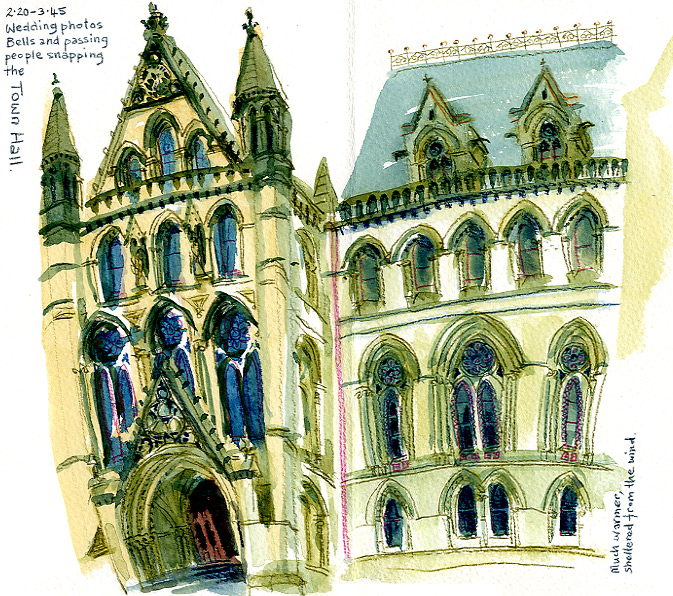 The afternoon's sketch-venue was the area around Albert Square. I have wanted to sketch the Town Hall for a while, but until recently it has been surrounded by builder's barriers. It's a monster of a building, so I tackled one tiny section, being very careful this time to pick a truly sunny spot.

At 4pm, we regrouped again at a pub, where we looked through each other's sketches and got the chance to chat to some of the people from other groups. It was all too short unfortunately, as I had to dash for a train home.

It was still sunny though and there is one section of the journey across the Pennines to Sheffield, which is especially lovely in good weather. It's only visible for a very short time, so I had my sketchbook ready - this time a ready-made, mini Moleskin concertina, just A6.

A thoroughly lovely day. Thanks so much to Simone for organising things.

It was great to sketch with you again.

Cheers Sue, you too. Sketch-buddies are a great invention :-D

I believe that if you got a good technology that you can use in your meeting, you are able to deliver your thoughts more effectively. If ever you want to know more about the best conference room, feel free to contact them via their site.