It's an idea that's been rolling around in my head, which I have been thinking of pitching to a publisher for a while. I never seem to get around to getting on with the groundwork though, as there is always so much else on (you know how it is).

So, imagine my delight when Quarto Books emailed me out of the blue, asking if I would like to write one for them! It's going to be 128 pages, in the same series as Thor's book, which is a more general guide to Urban Sketching. 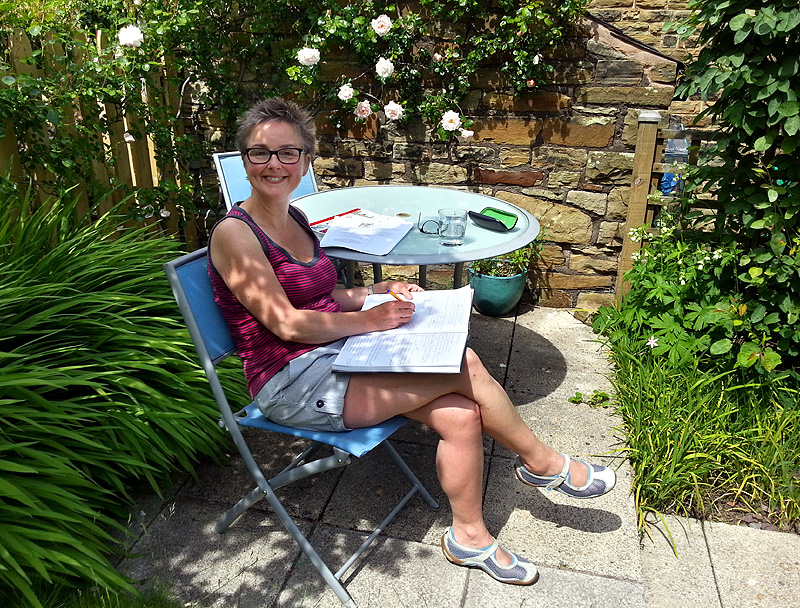 I have to write 25,000 words and there will be around 400 illustrations. The scanning in alone is going to be quite a task! The first stage is putting together a detailed synopsis, planning out the content chapter by chapter. So, last Friday, when it was uncharacteristically hot and sunny, I was able to sit out in the garden to work, rather than being cooped up in the studio. Lovely!

Congratulations, Lynne.
Looking forward to it!

That sounds fantastic - looking forward to reading it!!

That sounds like a really cool idea. Look forward to checking it out when it's finished.

The book will be a winner. Looking forward to reading it.

Oh Boy… hope it'll be available on this side of the pond too… I'd love to have a copy.

Yes Elaine, it will not go ahead unless they are sure of a US edition as a minimum.

Fantastic news Lynne - long overdue. I will be eagerly waiting it's arrival!

It is awesome, I love your people sketches!

Wonderful! I will be waiting!!!!

Well I'll be up for a copy.
Great to meet you on Saturday.
Looking forward to the next Sheffield/Manchester link up.

Thanks everyone for the lovely messages. I am really looking forward to writing it. I'll of course be announcing from the hilltops when it's available. :-)

Lye, how wonderful for you and inn writing this book, I know I sure need this help for one. Ca not wait to see it many happy writing hours,Linda