The forecast for Saturday was appalling: heavy rain from early morning through until the end of the day, with thunder and lightning a possibility. Perfect SketchCrawling weather, so I didn't really expect many people to turn out. Saturday was intended as a day of drawing outdoors too, capturing some of the beautiful architecture, but that was clearly not going to happen. 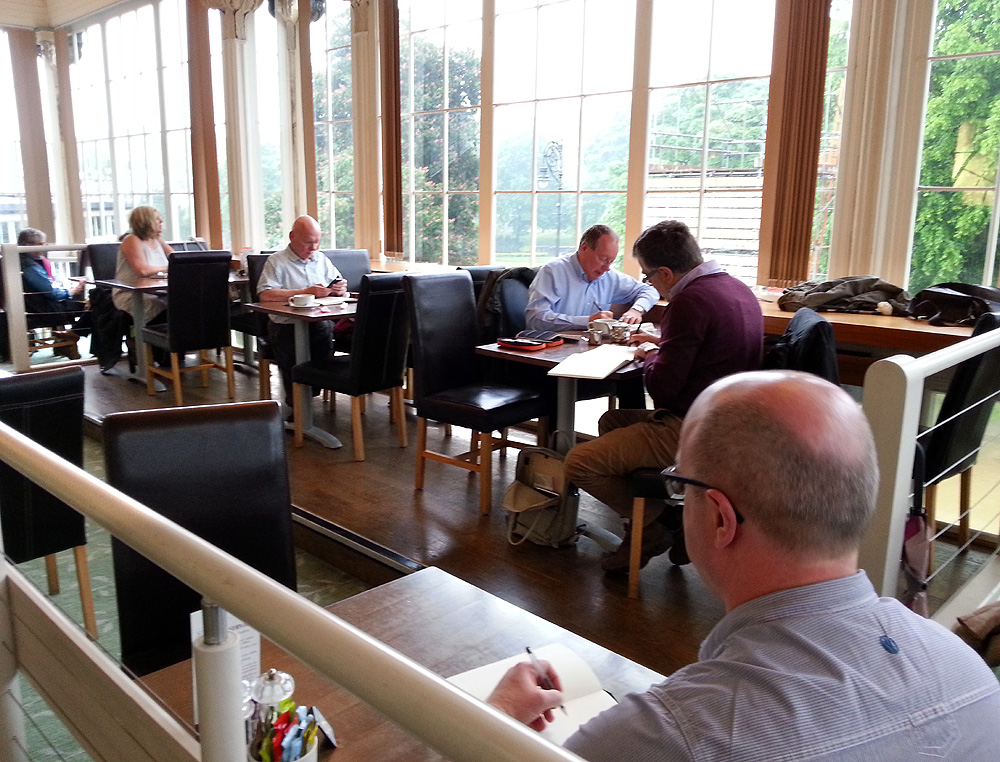 There was already a small group huddled outside the Opera House when I arrived and, over the next 10 minutes, they kept coming until I counted 23. It was starting to spit already, so we went inside to our first 'Plan B' venue: the Pavilion Arts Cafe. 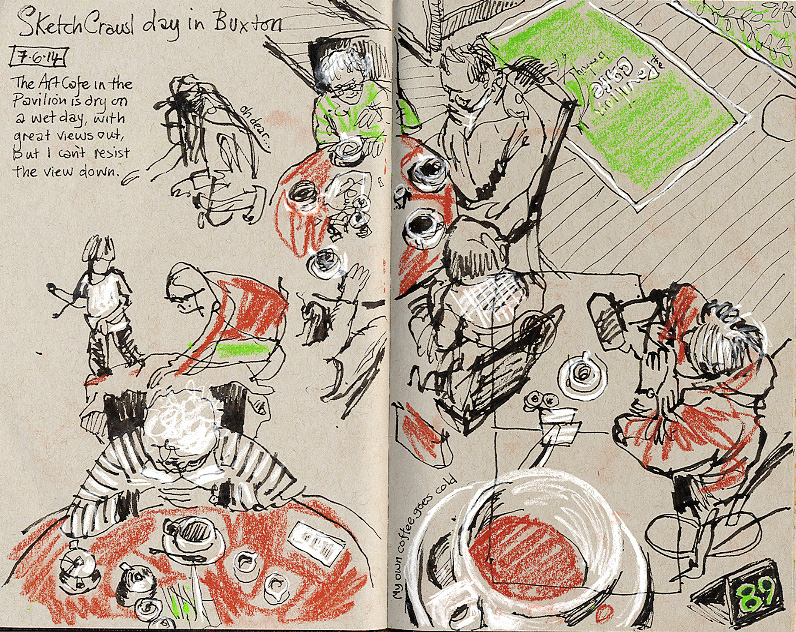 From the upstairs, which we had all to ourselves, there were great views out over the Pavilion Gardens, but I was most tempted by the way you could peer down over a balcony in the centre and spy on people sipping tea on the ground floor. 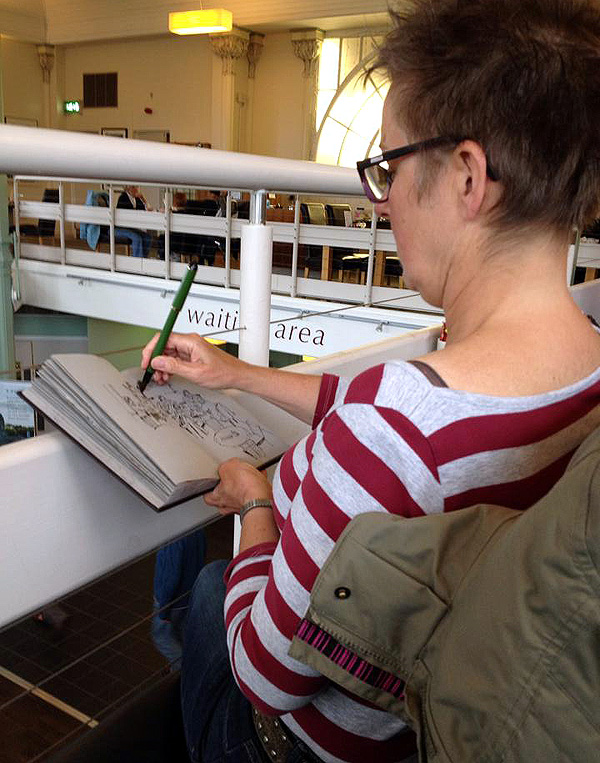 I stood up, leaning over the railing for my first sketch above, but kept worrying that I would lose the grip on my sketchbook and it would go flying down and hit somebody on the head, so I sat down for sketch two, which is probably why it is more controlled (and arguably less exciting). I was snapped half way through - don't you just love the sketcher's double-chin? So flattering. 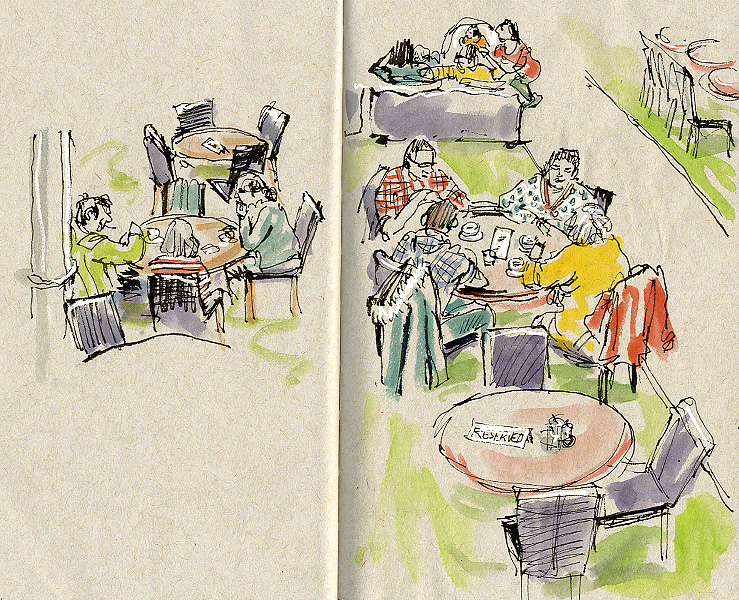 We stayed there until midday, when we got our brollies out and headed across town for lunch. By this time, a few more people had joined us. We were such a big group that I had to book out half The Cheshire Cheese pub. Thank goodness they could fit us in at short notice.

It took a while for them to serve us all though, so I did this sketch: 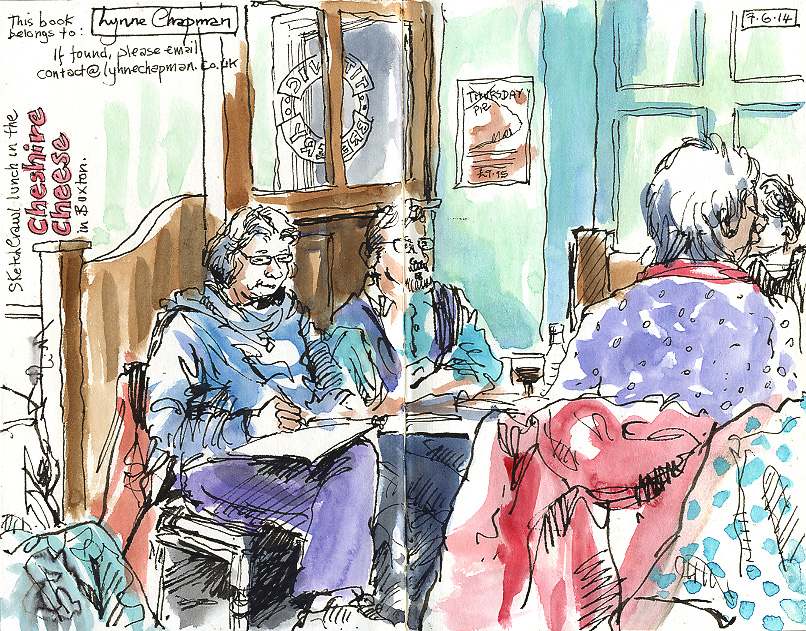 I was so intent on what I was doing, I didn't even noticed my sneeky neighbour snapping me in action once again: 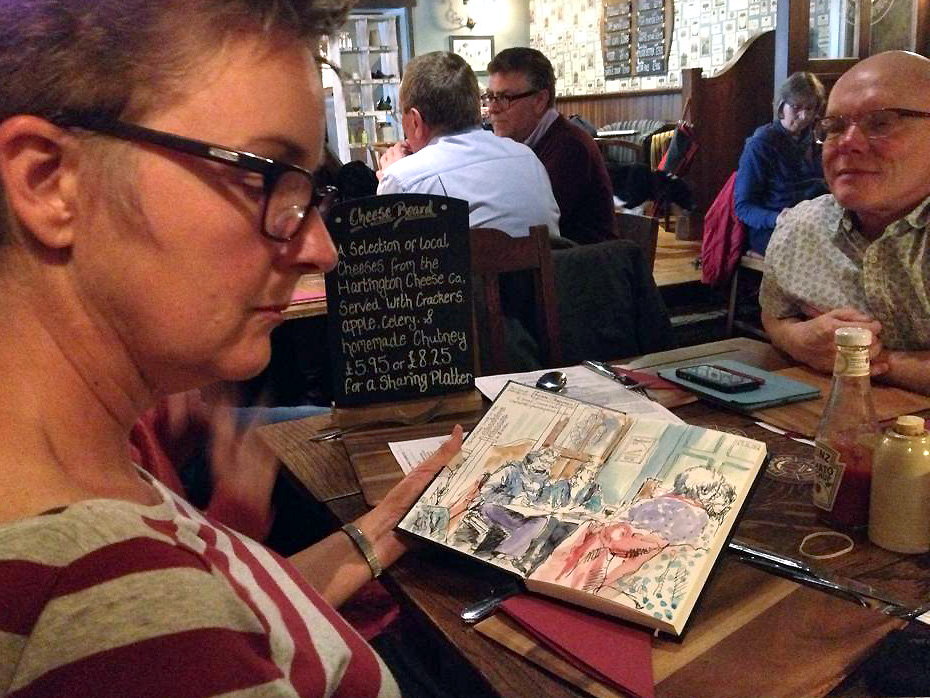 It was nice to have a long, lazy lunch actually - it gave us lots of extra time to chat, especially good for the new faces. We had quite a few first-timers. Ours is a very sociable group. I think it's a really important part of the day.

Once we were all fed and watered, we headed to the Cavendish Arcade: a lovely, tiled arcade, with a beautiful glass ceiling. I don't feel I did it any justice: 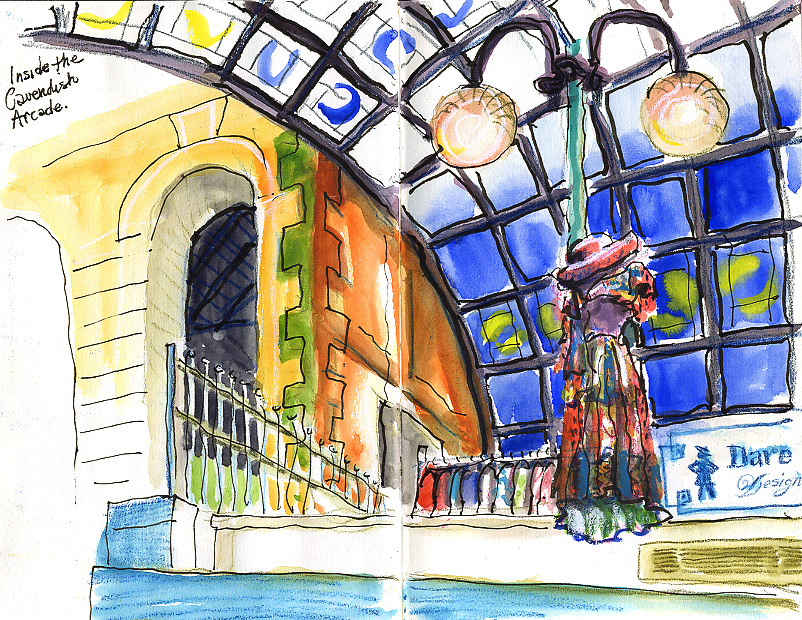 The last sketch-stop was The Dome - part of the University of Derby. It had actually stopped raining, so I spent my final 45 minutes in the car park outside, crammed into a corner against a grit-bin, where I was able to get this view: 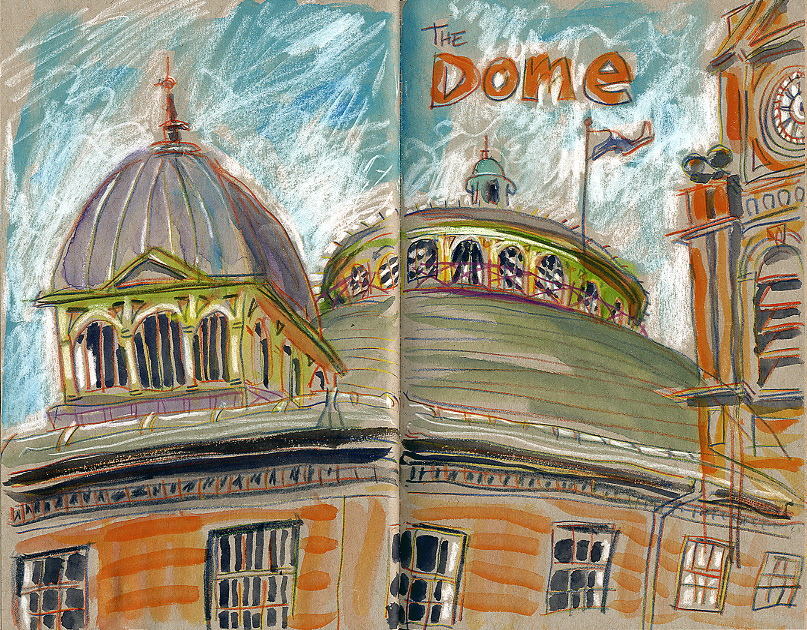 We had booked the upstairs room of The Old Clubhouse pub for our sharing session. We pushed loads of table's together, but still struggled to get everyone round.

As usual it was lovely looking through all the books. It was especially interesting because of all the fresh faces. Lots of holding up of sketches, and: 'Wow - who did this!' kind of thing. 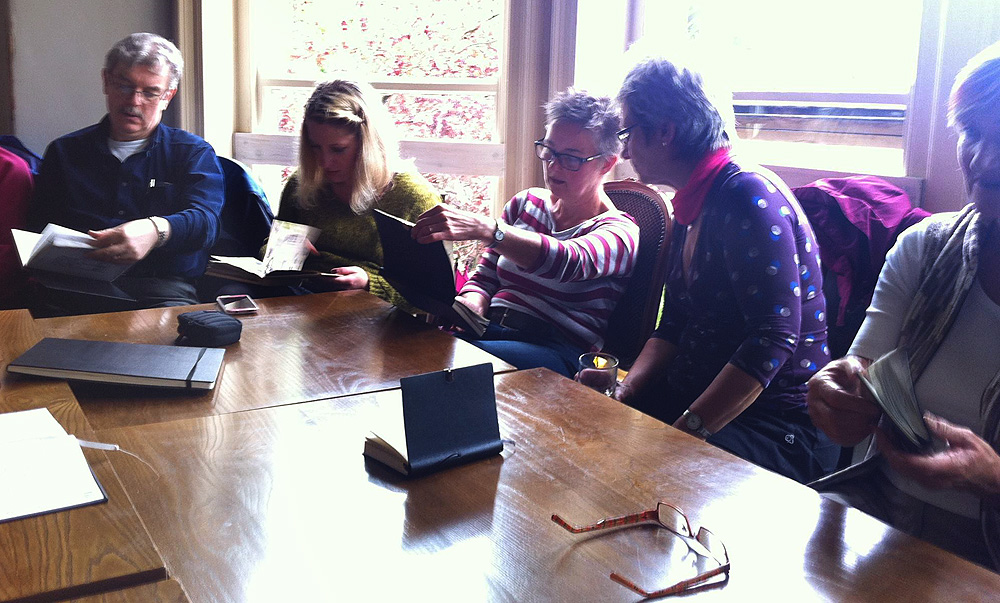 After about an hour, everyone went their separate ways, but I had to hang around, as John was coming to pick me up. Because the day was over, the sun was now out and it was really warm. I sat on the wall outside the pub and managed this sketch before he arrived: 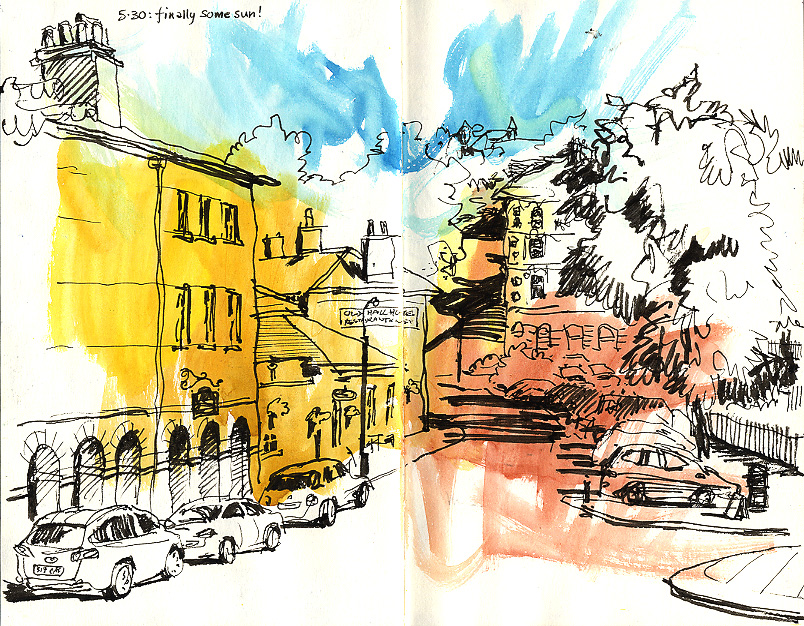 Thanks to everyone who took part on Saturday, especially for turning out (and sticking with it) on such a miserable day. Next month we are thinking of visiting Manchester again, this time for the John Rylands Library and the Royal Exchange. They are both beautiful outside as well as in, so I'm crossing fingers that we might actually get a proper summer's day, no umbrellas needed!

Hi Lynn,
I was at your SCWBI talk at the 2010 conference and I just popped in to see where your work was talking you. I love seeing how your sketching style has developed. Best wishes.

Me? Sneaky? Yeah... I love doing the photography as well as the art and it was a pleasure watching you work, Lynne.

Thanks guys. Hello again Charlene! Its great to have someone remembering to snap pics occasionally Lucie - cheers for being sneaky :-)