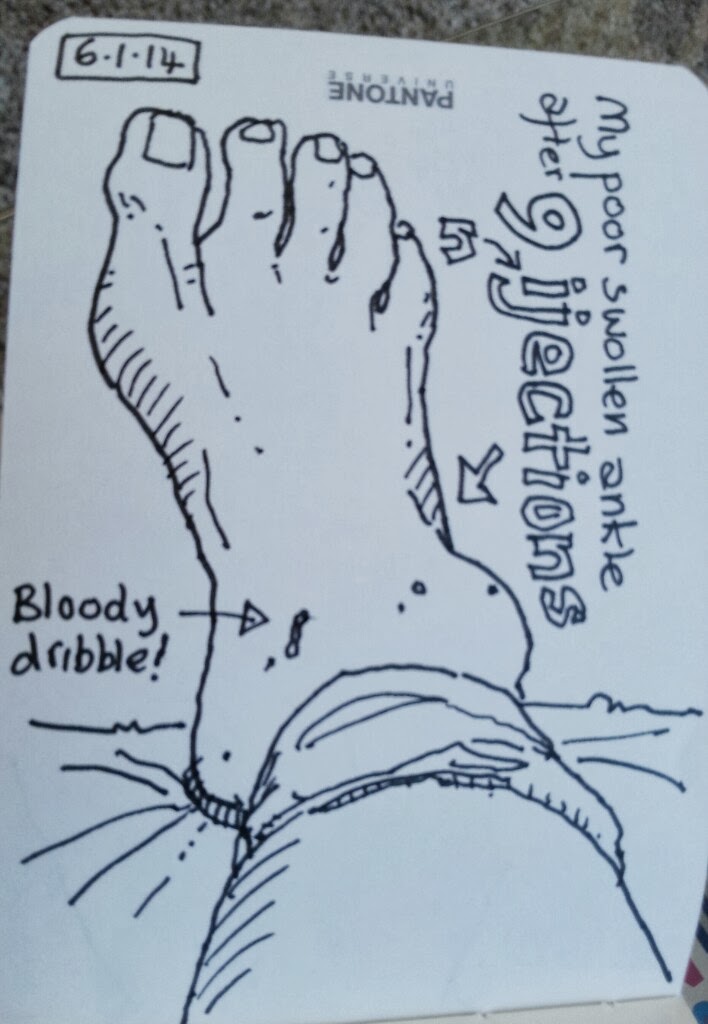 I am not in the studio this week. I am instead spending my days sitting in an armchair with a laptop perched rather precariously on my knee, because my right leg is propped up on a pouf, which is wedged onto the seat of a cane chair. You can't see my bandaged foot, because it is swamped by a huge bag of frozen peas. Do you have a picture? 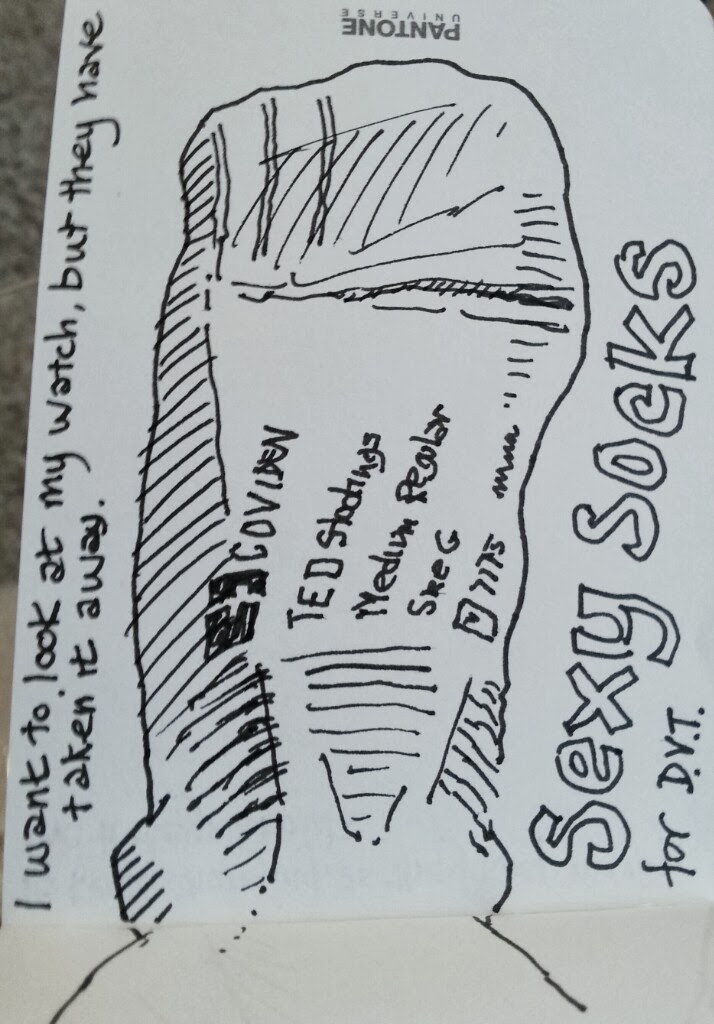 This is of course because of the foot operation I had on Monday morning, for a Morton's Neuroma. Basically, I have to have a small section of inflamed nerve removed from the intersection of my toes.

As you can see, I took my trusty little A6 sketchbook, like last time. There was lots of hanging about, getting prepped and then waiting for my turn: drawing is the perfect way to both pass the time and keep myself from thinking too much. 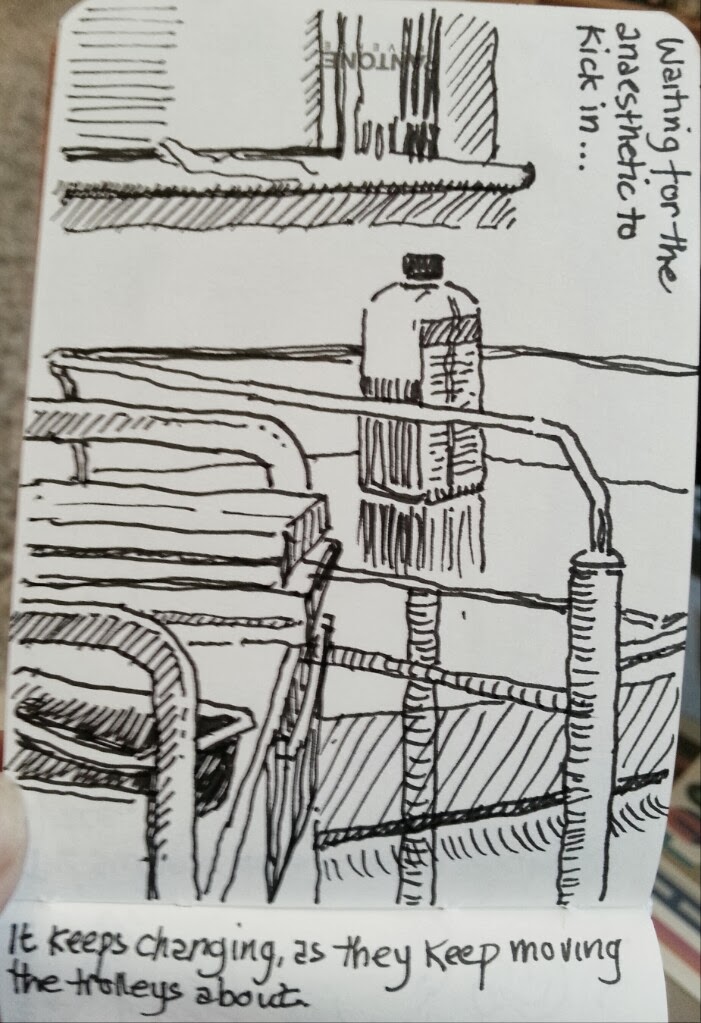 As this is the 2nd of 3 identical ops, I knew what to expect. Everyone was very friendly and I was very relaxed, especially once the injections were over - that's the worst bit. They have to do them in a ring round my ankle, but twice, for both a quick acting and also a long lasting anaesthetic. There were nine (!) but I was extra lucky and got to have an additional one, because it turned out my nerve ran down the wrong side of my ankle bone! 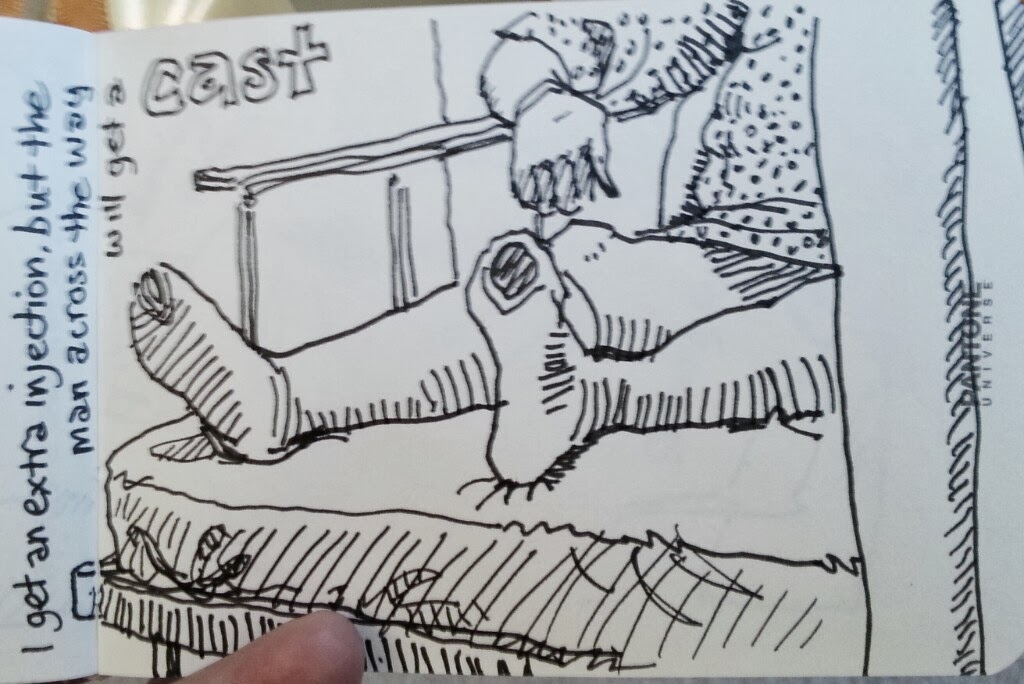 The op itself was nothing - the work of a moment. There was one snag though. I get cramp. I am on medication which stops it, but unfortunately, my muscles REALLY don't like the tourniquet they have to use during surgery. I got a small cramp last time, right in the middle, but luckily, when they eased off the tourniquet a little, it passed. This time I got a full-on attack. My calf turned to rock. I started with a 'Ooh, ooooh, I have cramp...' and a second later had reached 'Aaaaaaaahhh! Jesus! Help!!!'. I got quite loud. Actually very loud. 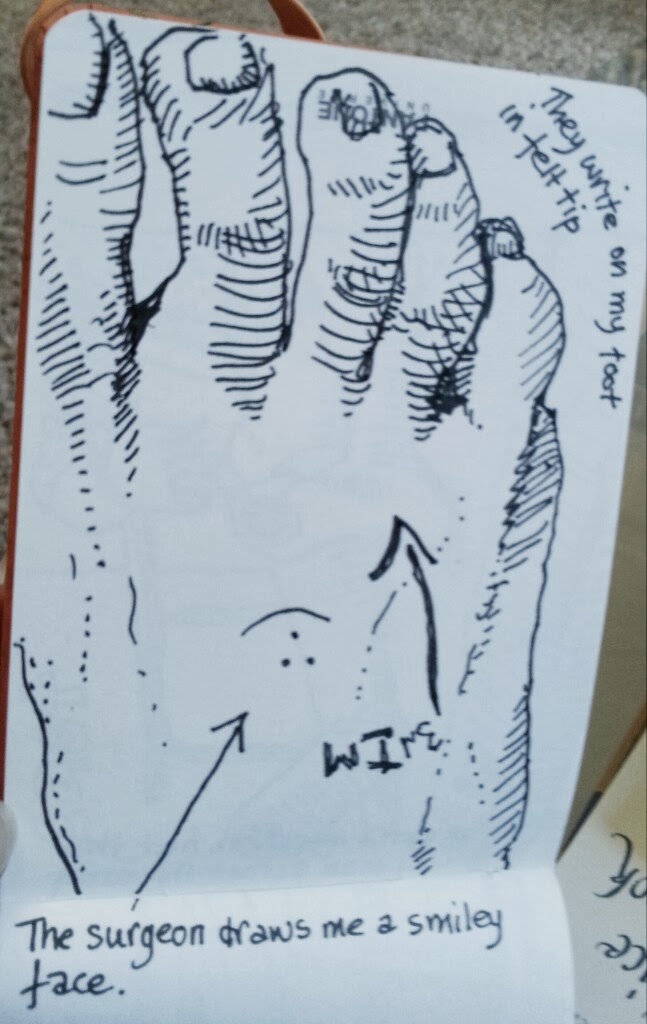 I couldn't get to my calf, to massage the muscle and it was getting worse and worse. The surgical team just stared at me, waiting for it to calm down I think. Eventually, when their ears were bleeding, they gave in and took the tourniquet off. 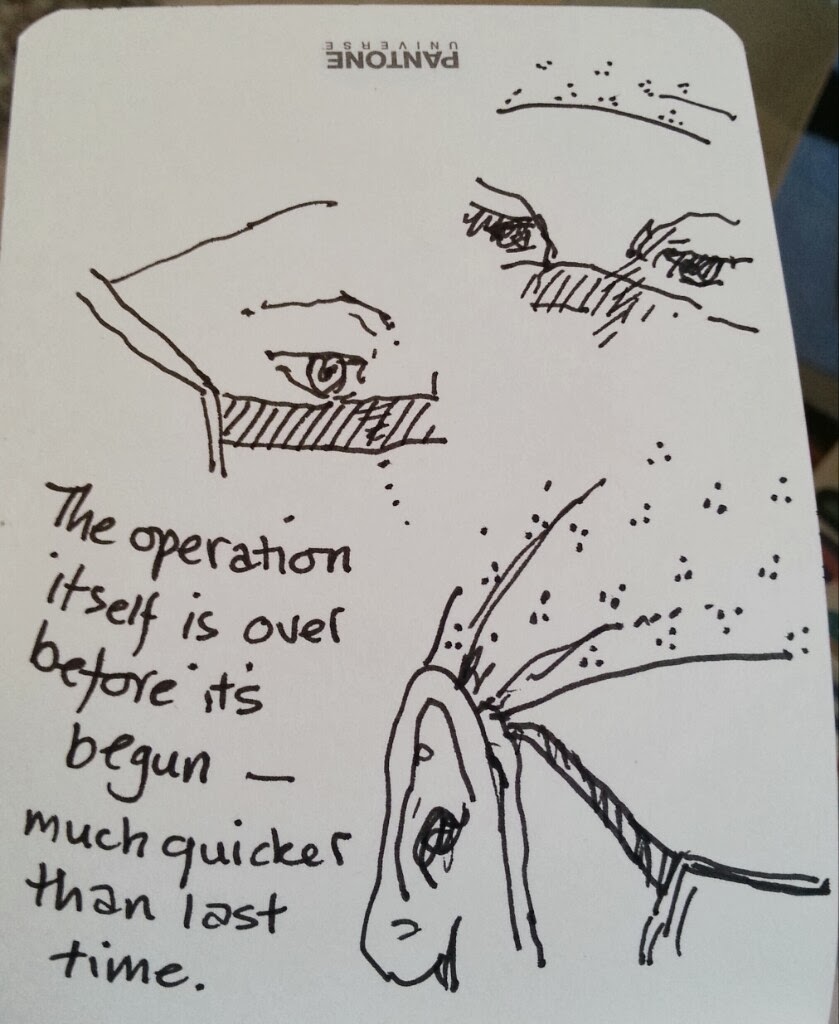 A bit of massage set things straight, but I was quite anxious about them putting the tourniquet back on.
'What if it happens again?' I asked the surgeon. There was a worrying pause.
'It won't happen again,' he said, with not quite enough reassuring confidence. 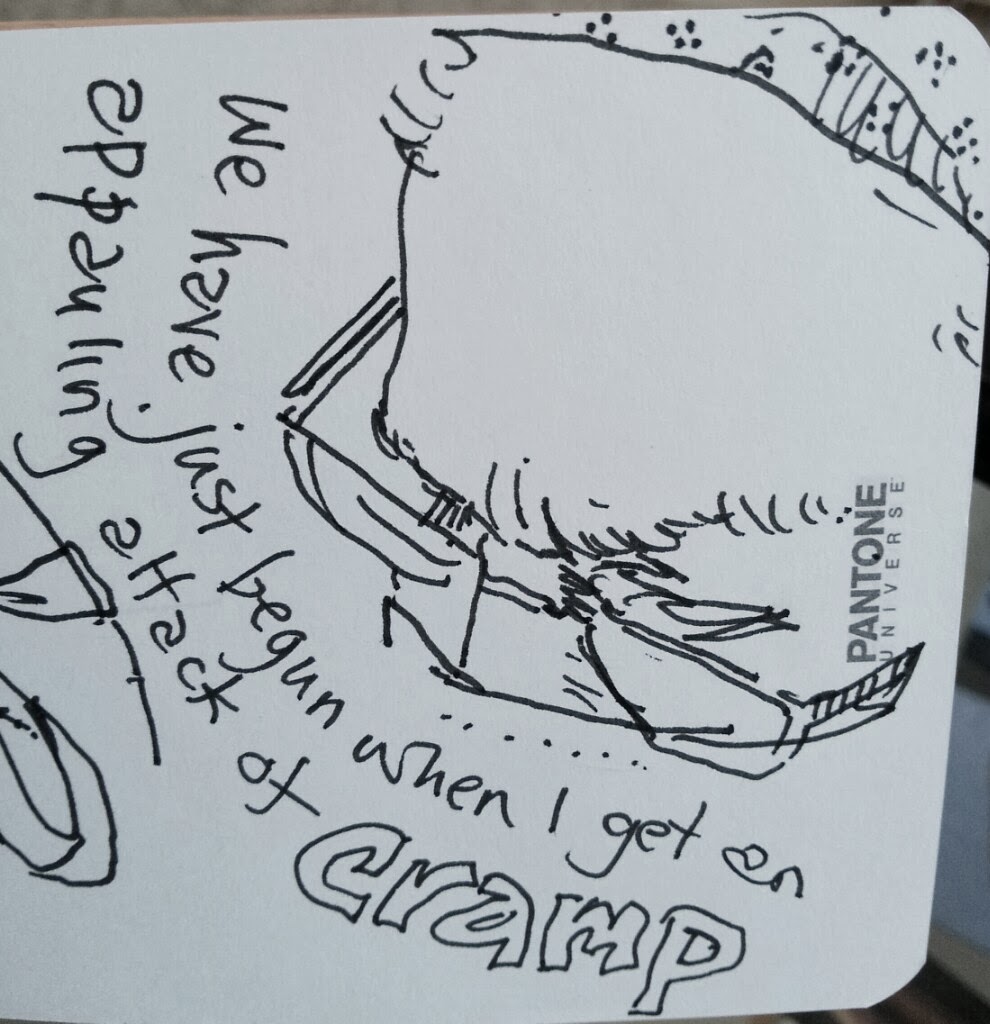 But thankfully, it didn't. I was wheeled back to the prep room for tea and biscuits, where I quickly reassured those patients about to follow me into surgery. They, and the prep team, were white with anxiety, having listened to me apparently having the wrong foot operated on! 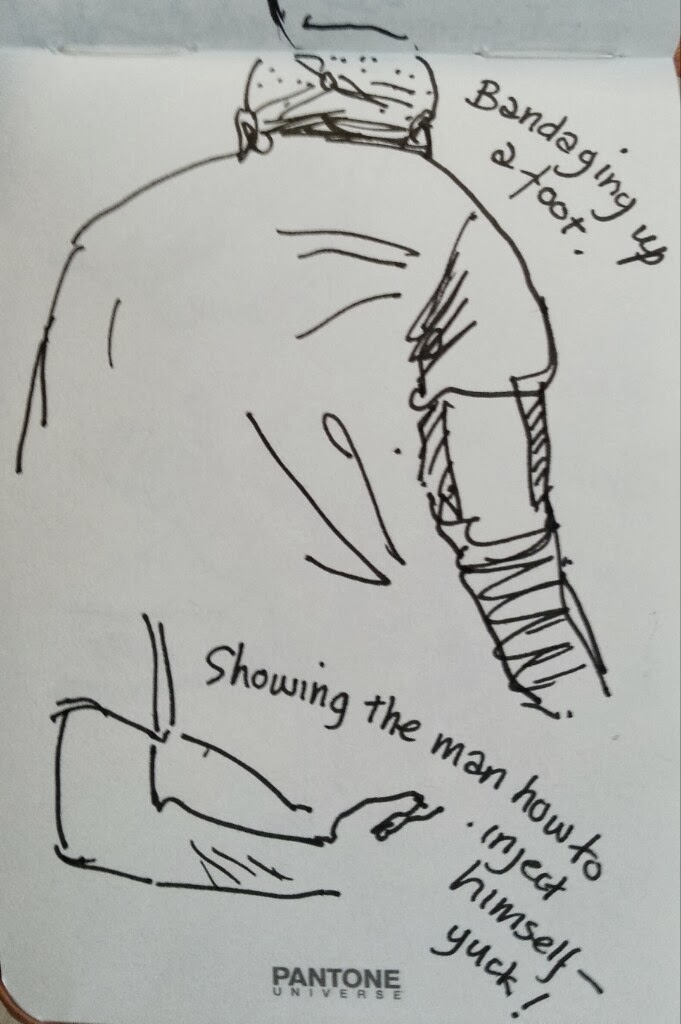 Anyway, all is well now. I have got away with no post-op pain at all. John is having to wait on me totally, which is some consolation for being stuck in this chair for the next couple of weeks.

I timed things so all the artwork for Jungle Grumble was finished, but I can still sketch with a board on my lap, so I have just designed a possible front cover and sent it off to Piccadilly Press. I'll let you know if they like it.

Wow! What an adventure, I am glad the worst part is over for you. Feeling your pain. Wish you quick recovery.:)


Whoa ... A foot fetishist's dream ... but unfortunately I'm not ... and it looks really painful.

Love your sketches of the day of adventure! So sorry you had the cramp so bad this time, being someone who gets terrible cramp on occasion, I totally understand the awfulness you went through. Keep resting that foot.

Lol! Not sure even the keenest foot-fetishist would be into my foot right now :-D

Thank you. If you get regular cramp btw, you should tell your GP, as you can take either quinine or pregabalin, both of which will stop it more or less dead. X

After a year of troubles of my own, I've just caught up with yours. The operation, however short, sounds frightening, but then many would say the same about operations on the eye.

Anyway, just thought I'd wish you a speedy recovery.

Hi Lynne — if your bag of frozen peas is unreliable, you could always fill up a hot water bottle with ice-cold water. Much more reliable!

Now that is a clever and lateral idea... Thank you!