Celebrating a Beginning and an End

Well, of course, the 'beginning' we're celebrating is the start of the New Year. I hope you all had a lovely Christmas holiday and enjoyed your New Year's Eve festivities. I wish you all that you would wish for yourself in this coming year.

The 'end' that I'm celebrating is my finishing the final spread of Jungle Grumble. Hurrah! 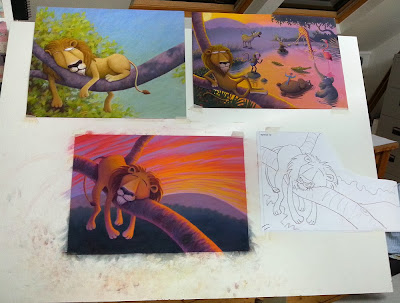 You remember I told you about the changes to my rough? Well, because we have lost the impact of the joke on this spread, I wanted to make sure we had a lot of visual impact. Since the actual content is very simple (for once!) I decided to use colour to make sure we had a visually striking note to end on.The final illustration, of Lion dozing in the tree, follows straight after the one where the sun is going down over the waterhole: 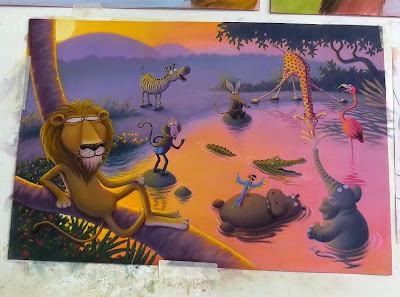 Luckily, we've had a couple of cracking sunsets here in Sheffield recently, so I knew the effect I wanted to capture for my final image. There was a spectacular sun-down on the evening of our Sketch Pub-Crawl: we were on our way into the Sheffield Tap at the train station, when everyone stopped in their tracks and stared up at the sky, which appeared to be on fire. One of my fellow sketchers, Lynne McPeake, (who fortunately for me is also a photographer), caught this photo, which I used as inspiration for my illustration: 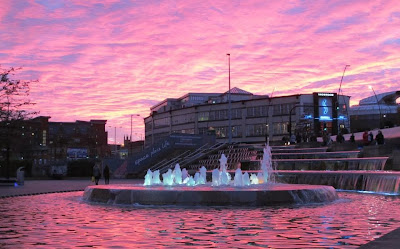 I laid down the basic colours and the sky texture first, which took one day. It was lovely to let rip with a bold, simple image, without too much fiddly detail. I was also having a lot of fun feeling my way, not knowing quite how it would finish up. I accentuated the gold a little more than in the photo, so I'd have a wider palette in play and kept the blue of the sky a little lighter, so the text placed over it would still be easily legible: 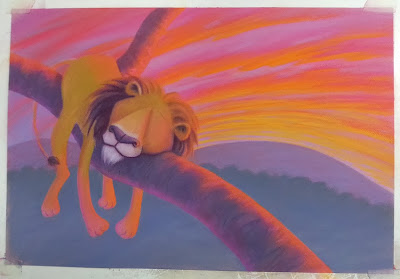 At the end of the day, I gave the artwork a thorough spray with fixative. I knew this would darken everything, but I wanted to work over the top, to establish darker shadows, so at the same time I just re-brightened where I needed to.

It took just over one more day until I was happy. This is how it looks finished: 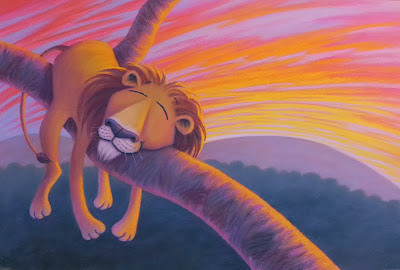 The only thing I am not 100% sure about is the top left corner. I think I will go back and simplify it slightly, so it is more like the earlier version. Then it's done. Yippee!

Actually, I can't totally celebrate yet, as the cover still has to be done. I'm taking a break for a couple of weeks though, as I have the operation on my foot on Monday morning, which is going to put me out of action for a while. This is the 2nd of three identical ops, so I know what I am up against and know from last time that there's no way I can sit at my drawing board for at least a fortnight. Still, now it's just the cover to go, I should be fine to get everything to the publisher in time for my end of Jan deadline.

Happy New Year Lynne :)
What a way to start... with such a colourful ending!
I love the sunset streaked sky (agree about softening that corner a touch).
Lion looks totally 'plonked out' on the branch, and I love the way he catches the golden rays in his mane and coat.
Just the cover to go - you will be fine for the deadline.
Good luck with your foot operation.

Thanks guys. It came together quite suddenly at the end. I am so pleased that it won't be a crazy rush for the deadline. X

Words are not enough to express my admiration for these illustrations!
And even nature helped you, with that wonderful sunset ...
Will this book be for sale in the Netherlands ? (otherwise I have to order it from the internet somewhere)

How lovely - thank you Inge. At the moment, as far as I am aware, they have signed up only a German co-edition, but once it goes to Bologna, the publisher will hopefully get more countries on board. We'll see! It's not due out for 9 months yet though.

Happy New Year. Congratulations on getting to this point with the illustrations, more or less done then...phew! :-) I can tell you do enjoy your work, your drawings show that. All the best for next Monday with the op.

Thanks Ann. I'm hoping it goes as smoothly as last time. Not looking forward to the anesthetic injections though - that's the worst bit!