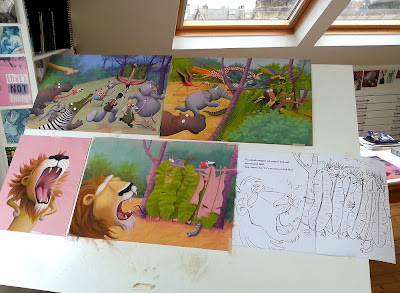 Last week, I finished the final piece of artwork I could for Jungle Grumble. This illustration comes quite early on in the story, where the animals first get into the changing room and begin to experiment. Lion has got fed up with hanging around waiting for them to emerge (it's the spread before this one): 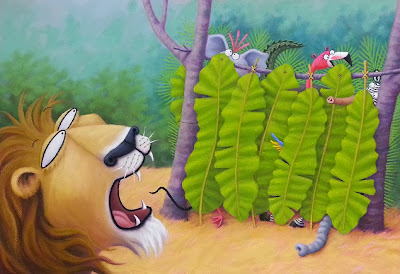 But there was still one spread outstanding, waiting for approval: the final spread of the book. My publisher, Piccadilly Press, has been negotiating the ending with a German publisher, who they signed up for a co-edition, as a result of the Frankfurt Book Fair.

This was my original rough, illustrating Julia Jarman's initial ending (the idea is that, despite his wise words earlier, in his fantasy, Lion is wildly multicoloured): 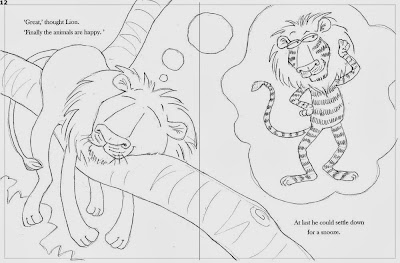 The hold-up has occurred because the Germans are keen to have something less jokey and more moralistic. Julia has come up with various other endings, but nothing has proved acceptable. In the end, Piccadilly have agreed to keep the illustration element simple, which will allow two different endings to be created, using text changes alone.

This is the image we have now: just the lion in the tree (the text is the UK version, left over from the first idea above, the German text is far more along the lines of 'be thankful for what you have'): 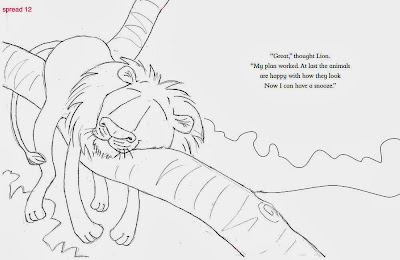 To be honest, I am a little concerned that, by removing the fantasy joke, it could leave our version with a rather limp ending, but hopefully Julia can come up with something clever for the text, to make the UK edition sassy again. Julia is really good at this stuff, so I am casting misgivings to the back of my mind, remaining confident and getting on with the colouring up.

I have been desperate to get the go-ahead for this final spread as my artwork deadline is tight. It's because I am having another foot operation on Jan 6th, which means I will lose a minimum of 2 weeks working time, sitting with my foot in the air, packed in ice.

In the end I only had 2 days last week waiting around, without being able to work. To be honest, that was pretty handy at this time of year. So now, Christmas shopping all done, I am back down to it. I have around 2 weeks working time to do this spread 12 artwork, plus design and pastel the cover artwork. Then, after a final continuity check and general touch-up, all the artwork has to be packaged up and sent off to Piccadilly Press, for Feb 1st.

Hope the difficulties with the page get resolved, I rather like the sassy version personally.
All the best with your foot operation when that comes around - more sketches of the team perhaps, or will you not do that this time?
Happy Christmas.

Thanks Ann. Yes, I think I will sketch again. It is the best way I can think of to stop me dwelling on what's happening. :-)

I'm sure everything will go weel :) Personally I prefer the first one:)MERRY CHRISTMAS to you and your family :)

your work is really fantastic!