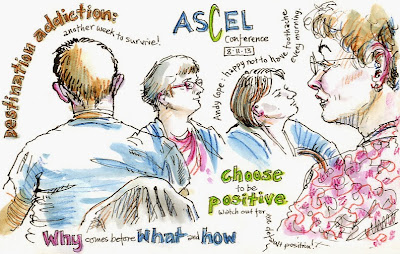 On Wednesday night, I got back from 3 days working in Norfolk (but more of that next time). Right now, I want to tell you about my two-day, drawing marathon at the ASCEL conference in Derby. 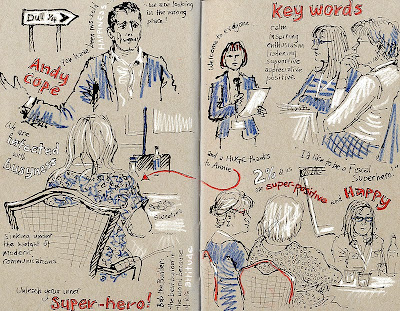 I got the job as Illustrator-in-Residence, because I was spotted sketching at a Youth Library Groups conference, a couple of years back. I was giving a seminar in the afternoon, but during the morning's lectures, I was having fun sketching the various speakers. As it happened, Annie Everell was sitting directly behind me and began watching over my shoulder.

"I was amazed," said Annie, when I met her again last week. "I have never forgotten it." 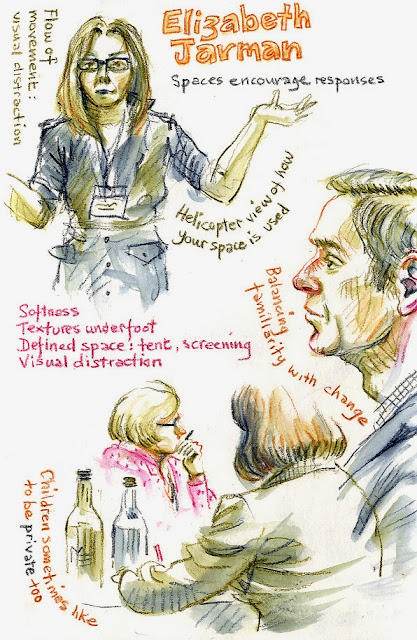 Amongst many other things, Annie runs an excellent agency called Authors Aloud UK, for placing authors and illustrators into schools - I am on their books. She also organises the ASCEL conference, for senior children's and education librarians.

So she hired me to document the 2-day event last weekend, to record all the speakers, convey the atmosphere of the conference and communicate the key issues, in the same way she remembered. This fitted very neatly with the theme of the conference, which was Communication. 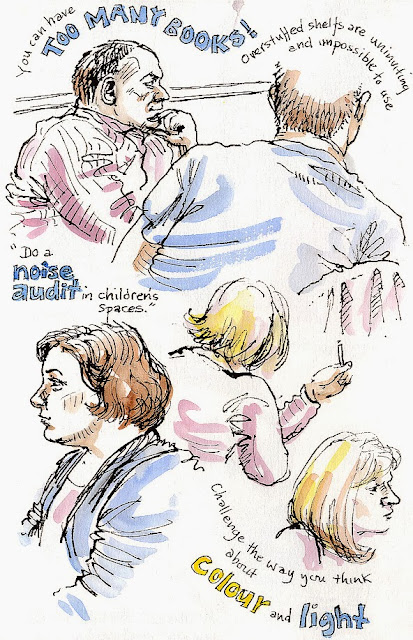 Of course, several delegates spotted me amongst them, drawing away furiously in my sketchbook, but my mission was kept a secret. As far as anyone knew, I was just there to speak towards the end of the conference, as part of a panel of children's authors, with Kate Maryon and Sophia Bennett. 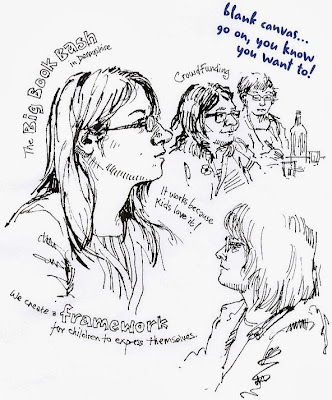 I had prepared a short PowerPoint for that part of the presentation. It was an easy theme to talk around, since communication is absolutely central to pretty much every aspect of my picture book work. It all went well (people laughed and nobody threw anything, which is always a good sign I think). Then, when all three of us had finished, Annie revealed my other, secret mission! 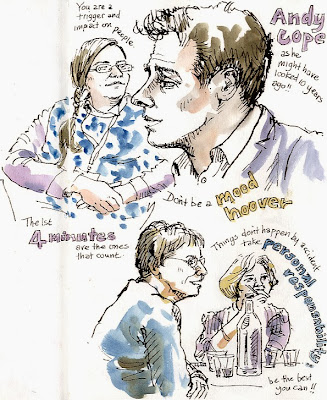 At this point, I was supposed to talk everyone through my sketched-commentary, projecting my various drawings with the use of a visualiser. Unfortunately, because of the secrecy, it was not until half an hour before my presentation, whilst setting up the visualiser as delegates were out of the way having coffee, that Annie discovered a major problem: the visualiser she had borrowed was incomplete and didn't work! 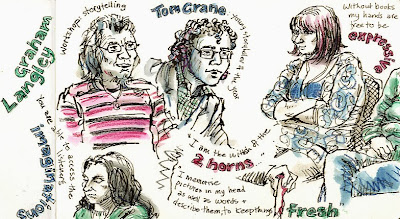 Annie did her best, rushing around, frantically trying to get my sketches scanned into the hotel's computer so we could still project them, but the hotel's scans looked like especially crude faxes and were barely legible. 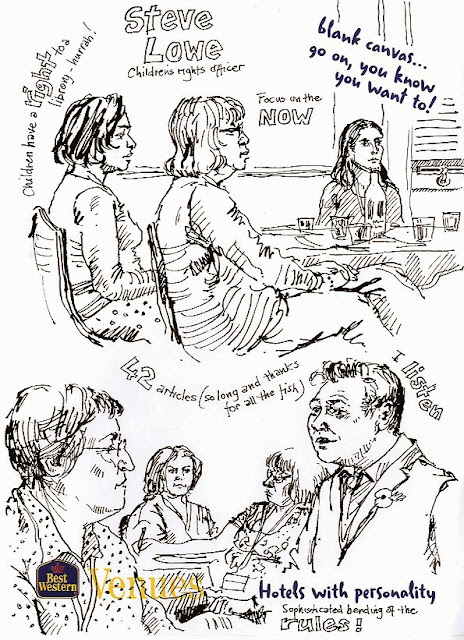 In the end though it was fine. I chatted merrily on about Urban Sketching and why drawing is good for your soul, while Kate and Sophia kindly volunteered to carry my books out to the delegate's tables for them to flick through themselves. 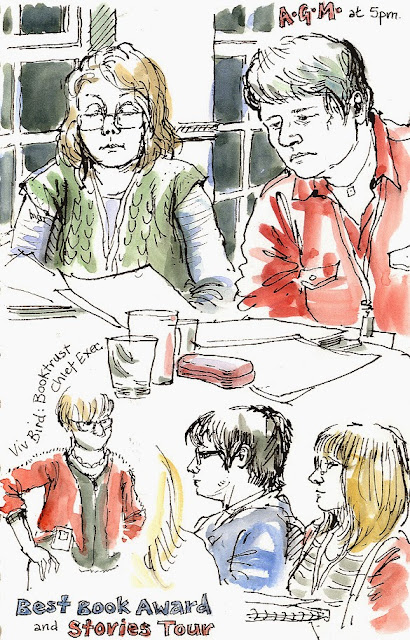 It was lucky I had worked in 3 separate sketchbooks, as well as a few loose sheets of the hotel's paper (when Annie was trying to do the scanning), so there was plenty to pass round. Everyone seemed excited about the idea and nobody got obviously upset at my depiction of them (phew). 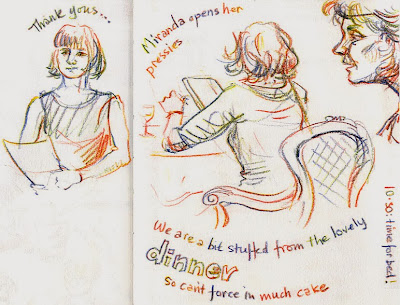 Then Annie made another announcement: Miranda McKearney, who has been spearheading the excellent (and incredibly successful) Summer Reading Challenge, was retiring. As an extra thank-you gift for everything she has done for children's reading, Authors Aloud would be presenting her with a framed print of my sketch below: 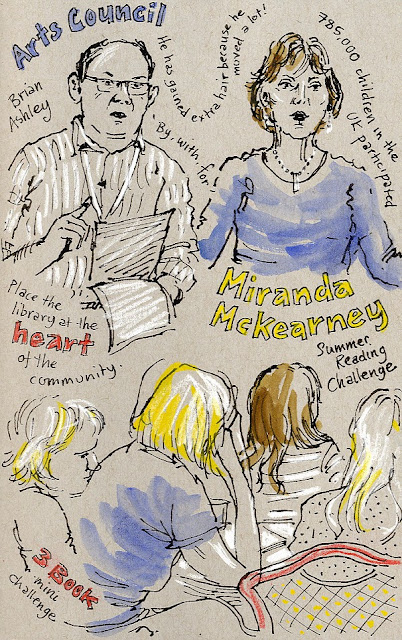 I'm so pleased I managed to get a reasonable drawing - I hope I have done her justice!

Recording the conference was a really lovely job (thanks so much Annie), not least because librarians are such a great bunch of people to spend time around. It was also a REALLY interesting event, with some fabulous and very inspirational speakers. Andy Cope had us rolling in the aisles! 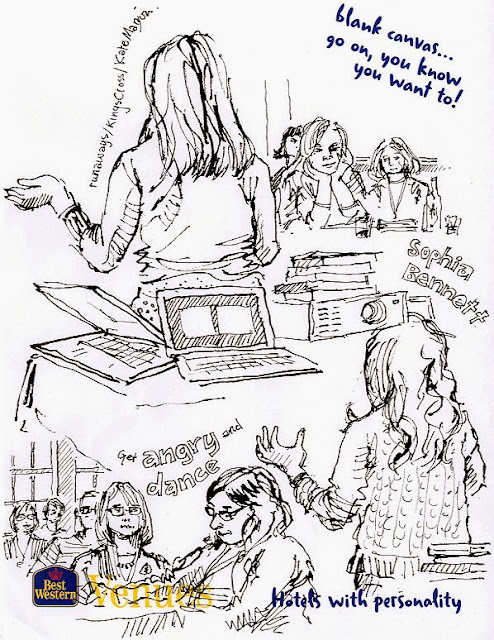 Unfortunately I missed the final keynote by David Fickling, which I'm sure would have been equally brilliant, as he too is a very inspiring man (I've heard him speak before), but I had to get a train back to Sheffield to repack for my trip to Norwich next day.

But that's another story...

Wow! Fantastic job, Lynne! What energy you have and it shows in your work. Sounds like a fascinating conference too.

Really lovely work. Thanks for sharing. Illustrator in Residence - how cool is that?

What a lovely record of the event and a great AIR.

Cheers guys. It was even more fun than I expected because the event itself was so interesting.

Nice picture, i like these and i think this best art for a artist.He express his feelings with drawing and i think people find their life on this.