I have just had a lovely week in Wales. You might think therefore that the title of this post is about me getting my paints out in the hills again. Nope. In fact, it relates to what happened when I got back to Sheffield, earlier this week... 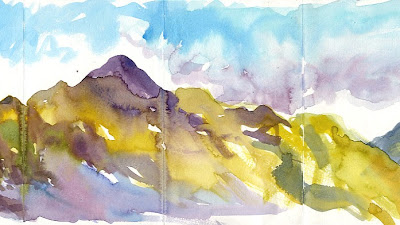 Only my most long-serving readers will remember the nasty cryo work I had done on my feet in 2010. Since then, the problems in my poor old tootsies have completely come back, so I needn't have bothered with all that drama.

Anyway, I went back to my GP and have now been assured that proper old-fashioned surgery is the way to go. Which is where I went on Monday morning. Yey. It was actually a very short op, only about 20 minutes in theatre but, because I only had a local anaesthetic, I was aware of the whole thing.

Now, I didn't want to get all faint and silly during proceedings, so guess what I did as a distraction? Yep, you got it:

The surgeon was bemused - he had obviously not been sketched in action before. The team all had a good look when they were done and it made them smile. 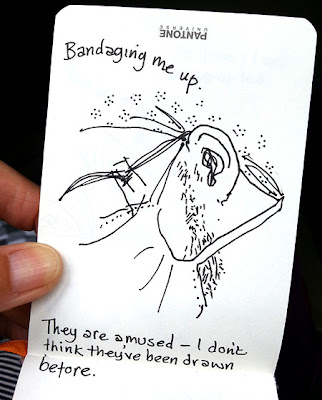 I must say though - it really worked a treat: while I was concentrating on drawing, there was no way I could give my full attention to the nasty sound effects of bits being snipped off. 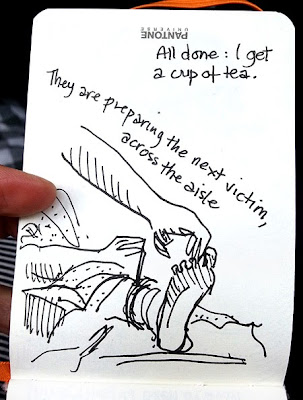 The only thing that didn't go quite to plan was my attack of cramp. Yep: right in the middle of the op. I think it was the tourniquet they put around my calf. Luckily, when they eased it off a little, the cramp faded and I didn't end up hopping around the room with my foot hanging open!

I have spent the last couple of days sitting in an armchair with my foot up on cushions, packed in ice. Hope you like the sexy shoe and stocking: 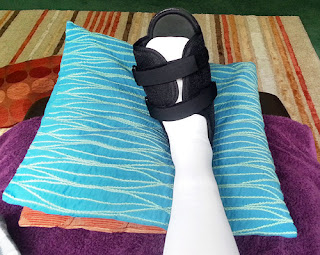 They sent me home with a bucket load of painkillers, which was a bit worrying but, so far, I seem to have got away with it, as the most painful thing I have had to endure is John's cooking. Sorry John, that's a joke. Honest. You wouldn't want to hit an invalid would you? Oh, you would..? Uh-oh.

That was a first for me too. I've been carted along via sketchbooks to many interesting places. This time you even had me cringing at the sounds you were hearing.

Aww, sorry you have had to go through surgery, but I totally get it that you sketched whilst the op. was being done. I've got to have a knee op. next month!!! eeek. Should they say they cannot do a general anesthetic then I had already decided I would sketch if they let me. So SO glad you have shown they will allow it whilst they operate, at least in your hospital. North Devon hospital is very good about a lot, so fingers crossed they will let me sketch. Apart from that I'm taking my sketchbook with me as it will occupy me with all the waiting about.

Do you have to walk about a bit each hour because of DVT? I'm told I will need to walk a little every hour! How does that work for you with what you have had done?

Wishing you lots of healing and I've enjoyed seeing your Op. Sketches :)

Go for it Ann! I didn't even ask actually. They said I could take in headphones and music, and even asked if I wanted my phone to play with, so I figured a tiny sketchbook is no more intrusive.

I have DVT stockings and must wiggle my ankle periodically, to keep blood flowing, but I am not allowed to walk on my foot at all for 2 weeks. Just heel-hopping to the loo and back.

So enjoyed your post and sketches! Don't think I could do it :) Wanted to give you a tip....I had foot surgery a few years ago. Wasn't allowed to put any weight on my foot at all for the first couple of weeks so I used my desk chair with wheels on the bottom like a scooter--bad foot's leg knee bent on the chair and pushing with the good foot and held onto the back of the chair for balance. Worked great! (never could coordinate the crutches).

Here's to quick and healthy healing!!

Good idea! I'm doing a lot of hopping and am lucky that we have narrow halls and stairways, so balance is not an issue there, but crossing rooms is trickier. I could get into scooting around like that, even after my foot is better!

Fabulous ! one question. Did you ask or tell the doctors you would be sketching them ? I sketched continuously in hospital , but always put my pencils away when the doctors turned up. My one regret about my time in hospital

Thanks Alissa. No, I asked the person prepping me for theatre if I could have my sketchbook out of my handbag (which they had already put in a locker). After that, I just went for it straight away and kept going when they wheeled me in! I deliberately took a very tiny sketchbook, just A7, and a simple fineliner, so it wouldn't be too distracting for the surgeon, or get in the way - I thought the full paint set might be a bit much ;-)

omg!!!!! You are a legend Lynne. I can't believe you sketched whilst being operated on... and such great drawings too.

I love your creative sketches. It was really so beautiful. Thanks
clipping path service/Background Removal/Raster To vector