Yes, it's that time of year again. As always, I'm fretting about the Christmas presents I haven't bought, but I've also been looking forward to the parties. Yesterday, two of my publishers, Gullane and Hachette, had Christmas parties on the same afternoon, so I swapped my slippers and slouchy trousers for something a bit more flattering, put on some lippy and got myself off to London. 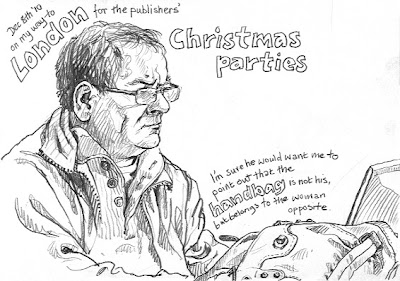 I had to jump between the two events, so missed half of each, but it did mean twice the fun and frolics for just the one train fare (I'm a well-know tight-wad). It also felt very showbiz: "Sorry, must dash, I have another party to get to..."!

It's so lovely to be treated for the day. The folks at Gullane brought their pink-nosed authors and illustrators back to life with mulled wine, in the wonderfully Dickensian setting of their offices, at the very top of a twisty stairwell, at the back of an old courtyard, behind Fleet St. It was lovely meeting the rest of the team at Gullane, and they had the great idea of creating a display of lots of our books, so when you met someone new, they were able to point to their book and say, 'This is me.'

At 4.30, I zipped across to Oxford Circus with new friend Jane Cabrera, who also works with both publishers. At the Hachette party we swapped 'cosy & intimate' for 'noisy & lively', so it was a fun contrast. At least a couple of hundred children's authors and illustrators were chatting, laughing and swilling their complimentary drinks in the semi-darkness of a trendy bar.

I have been to the Hachette party every Christmas for some years now, so by now I know at least half the faces, which makes it really welcoming. We all live at different corners of the country, so these dos can be the only chance most of us get to see one another, which means we generally get a bit giddy, especially since those lovely guys at Hachette are always really generous and keep the free wine flowing right through the evening too. 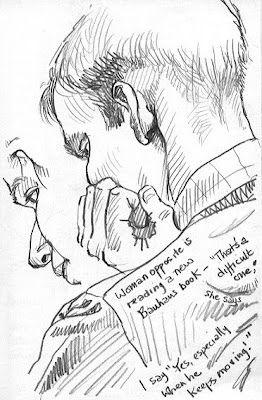 It was thinning out by the time I had to leave for my 9pm train home. As usual I cut it a bit tight, but it would have been OK, if I hadn't asked directions of a stranger on Oxford St. "Oxford Circus is that way," he said. But instead I found myself at Tottenham Court Rd, which meant changing lines, which added at least 10 minutes... You know what's coming.
My ticket was for that specific train only, so I had to act as distraught as I could, until the nice ticket lady took pity on me and franked my ticket for the next train. Unfortunately it wasn't for another 1.5 hours (uggh) and was the final, stop-everywhere, which wouldn't get me into Sheffield until 1.15am (double uggh).

I had something to eat at the station and passed the time reading two wonderful picture books illustrated by my friend Cassia Thomas. We had done a book-swap at the party: I gave her my two Giddy Goat books and she gave me George and Ghost and Lively Elizabeth.

We'd been underway just 45 minutes, when the train stopped. The tannoy crackled to life: "We apologise for the delay, but there is a man running around on the track". We spent the next hour travelling at walking speed, so we wouldn't hit him. "Stuff him," said the woman across the aisle. It was getting on towards midnight. "Just run him over and be done with it!" 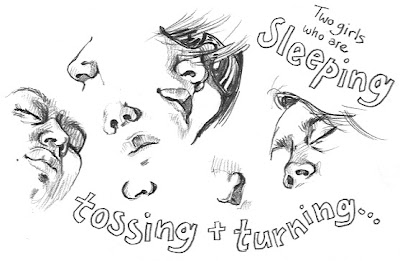 I slumped into a black cab outside Sheffield station at 2.15am. Guess what? He refused to take me to my door, because my road was too icy! So, come 2.30, I'm picking my way from the main road in the dark, across the shiny, compacted snow on the pavement. Thank God I didn't wear heels!!

I finally fell into bed about 2.45am. It was worth it though.

Sounds like fun though, despite the epic journey home. It must be fab to have so many illustrators in one place at the same time (and with free wine!) - kinda makes up for all the hermit-like solitary studio hours!

What an adventure! Glad to know that you enjoyed the parties Lynne, but what an eventful journey home. Not a very chivalrous taxi driver!

There's a giveaway on my blog - hope that you'll take a look. Lesley

Very entertaining outing! Think I'd have had a sense of humour failure when it got to the taxi driver part though!

Stopping by to tell you i love your blog! You inspire me to sketch-sketch-sketch :). Thanks

i loved this post--and i'm envious, having never been feted at such a party. thanks for giving us a peek at it~~