Sketchcrawl no 3: In Defiance of the Weather!

On Saturday I got up early and wrapped myself in various layers of vests and jumpers. I donned not just walking books, but also gaiters, packed my drawing gear and lunch into a rucksack and set off to walk to the city centre through the snow: still over a foot deep in places. 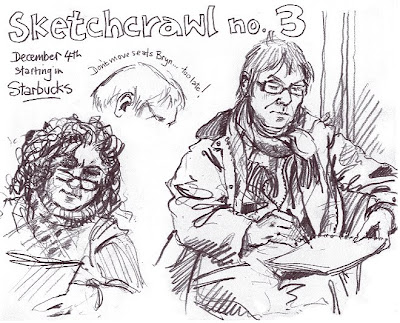 I wasn't sure if other people would make it: apart from the monster 4-wheel-drives, cars were still a no-no in Sheffield, with all but main roads impassable. But the Sheffield sketchcrawlers did me proud. About 15 of us were huddled over our coffee and sketchbooks in Starbucks by 10.30 and several more joined in as the day progressed.

This is Tom, only 12, who got his mum to bring him all the way from Chesterfield. I'm so pleased they came, as he was astonishingly good, and brave enough to stay with us the whole day - well done Tom (and Mum)! 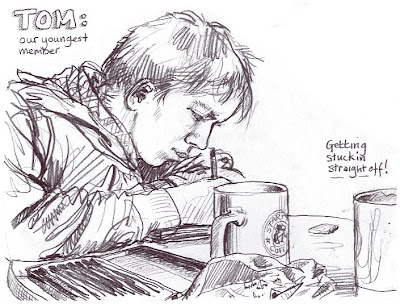 We moved to another cafe over the road after the first hour. I painted the view from the window. It was a bit tricky, but going OK, until the inevitable: a post van drew up and blotted out half the view. Never mind, I thought, and drew it in, but then the postman got out and opened the back doors to blot out most of the rest of my window! 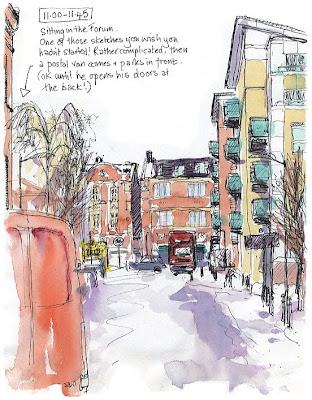 A surreal highlight in the middle of the day was the near punch-up we got into, with a little-Hitler, 'jobs-worth' at the City Hall (below). I jest not...

The message that we were coming to draw in the foyer hadn't been passed on, and he got really bolshie. It's a public area and we were being very understated and weren't even in the way at all, but our new friend was strutting about, asking who had given us permission to draw, and reporting us into his radio. 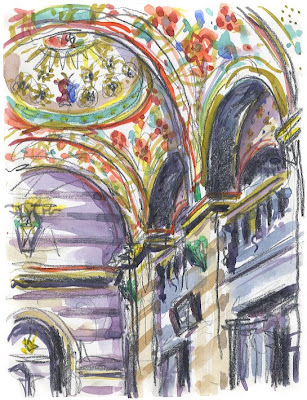 My friend Jane got shirty about his attitude, which made him more indignant than ever. We only had about 40 minutes in that venue, so it all came to a head as we were due to move on anyway, but he thought he'd made us leave, which got Jane even more annoyed. It ended with us all giggling, and him shouting after us down the front steps: "It's a good job you're leaving or I'd have thrown you out!"

After lunch we hit the cathedral, which was wonderfully toasty. 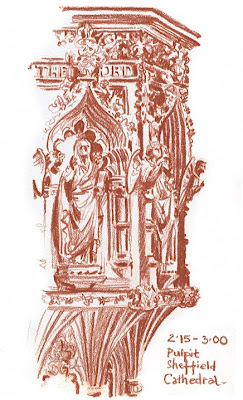 The orchestra we had intended to draw had cancelled of course, but it didn't matter: there where so many different things to sketch in the interior, it was almost impossible to choose anyway.

Tom and I sat companionably in the front pew and drew side by side for about two hours. Even when I accidentally sat in my water pot, upset it all over the pew and swore, probably too loud for a holy place (oops), nobody came strutting up with a radio to throw us out. 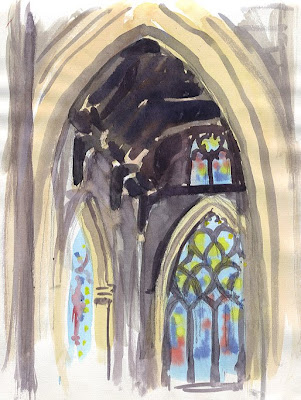 We had to rush through rain to the pub but, once in the warm and dry, spent a happy hour passing round the sketchbooks. Nic was still drawing the whole time.

I'll post other people's sketches to the Picture Gallery as they come in. Thanks for coming everyone, we'll do it again soon!

After reading this out to my Mum, we both laughed. The jobs-worth sounds like on of those yappy dogs which barks loudest as one leaves the room. Priceless.

P.S. I note you didn't draw him - that would have really got his goat. Ha-ha

Lynne,
Smashing good sketches. Did you remember to use holy water in the Cathedral? :)

Wow. I love the brown pencil piece of the cathedral. its so soft and smooth. and i love your style of sketching people :) My style is wayyy too rough and sketchy. lol!!

Saturday was wonderful. Thanks again Lynne for organising it all and nothing could have dampened our spirits, even the city hall polis!
Colleen

Nice Post, Thanks for your very useful information... I will bookmark for next reference

Thats a good' article,i usually amazed with' this thing, i asked myself about this opinion, I wish You'll a better articles that can make another people impressive..don't make the article feel rigit and isn't interesting and poor, i like to read this' article and i think this is "good".thank you' m'y brother.......... .