I spent one of my residency days sketching at home last week, because I am still not 100% over my cold, even now. Do you remember the fascinating Dormant Things project, looking at the various bits and bobs we have tucked away in corners, stuff we have no actual use for, but can't quite bring ourselves to throw away? I sketched some examples a while ago. last week, I decided it was time to drag some more of my personal clutter out into the limelight. 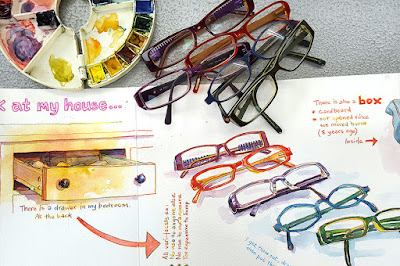 I have been meaning to record my various pairs of old glasses for a while. They are all old prescriptions, so no use to me, but they were so expensive and are still in perfect condition, which makes it impossible for me to dump them. I tried to give them to charity but, because they are varifocals, matched specifically to my eyes, they are no use to them either. So they sit in a drawer in my bedroom. Probably be there forever, slowly growing in number. they are a little like a collection of stuffed birds or pinned butterflies: delicate and colourful, but gone beyond their moment. 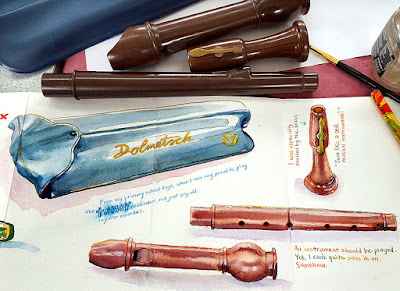 Another object which I don't use, but can't part with, is my tenor recorder from primary school. When my parents bought me this, I felt very grown up, because it felt like a REAL musical instrument, whereas the boring old descants were commonplace and without any status. I was particularly impressed by the brass tab for the little finger - very special. It got lots of use at the time. I'm sure I could still play it, but I don't. I feel a bit guilty, as instruments exist to be played. A bit of my heart still loves it though, in its posh case. That's going back into storage too. Shame on you Lynne! 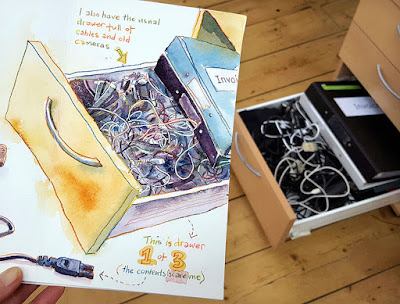 Finally, I thought I ought to have a go at sketching the obligatory drawer of anonymous cables. We now have 3 of these drawers, in 3 different rooms. There is no logic to this, as we have scant idea what the vast majority of them are for. But you know that, if you throw them out, you are bound to need them. Not that I would know which one you needed, even if I did. I wrote on the sketch that they scare me. They do, in the way that maths equations scare some people: I feel I should make the effort to look through them, but really, really don't want to go there.

No advise on the 'old' cables, but here's a tip for future cables and chargers... I use some white tape (bandage) write what equipment the cable/charger is for with a sharpie and wrap it around the cable and/or charger. It does make finding the cable you need easier as well as making throwing away cables to old equipment easy too :-)

We have a wooden towel ring hanging about the space where we charge our 'stuff'. All the cables hang in it. The electrical outlet is less than a foot away and a counter is 18" lower. We can charge any and all our 'stuff' and the cable never has to leave the ring.

Though, "never" having to leave and "wandering away from where it belongs" are two completely different things!

love this post ! Hope the cold is better...just yesterday I looked around for some interesting things lying around I always wanted to use in a post but never did..felt soooo good to use them with some
Wallace and Grommet so darn cute figures...the text is always top notch in your posts for sure.

I have a similar collection. The cables i blame on my husband who hangs on to anything. The glasses i donate to the Lions Organization whenever I feel that i really cannot use the old pair if I loose the new pair. Crazy!

Hi Lynne, I adore the posts on this topic. I'm glad to know you have lots of pairs of glasses. It makes me feel better about my growing assortment. I'm going to get one pair I'm very fond some new lenses. The sight of the cable drawer made me laugh. I recently asked the man of the house to check ours and then put them out with the council cleanup. They were snapped up in seconds for their copper content I suspect. I'm so taken with this topic I've bought myself a concertina book to record my own motley collection. I'll add spectacles along with my hoard of empty perfume bottles. See you in Manchester!

I admire you for making your "junk drawers" so pretty!

It's wonderful your infos. Thank you very much

Great news Anne - have fun with your new book!

Thanks so much everyone!

Great news Anne - have fun with your new book!

Interesting idea. Thank you! Not sure I am that organised though :-D

Interesting idea. Thank you! Not sure I am that organised though :-D