Last week I met up again with my brave sketching group at The Morgan Centre. They are all academics and mostly people who have no drawing, painting or sketching experience. They have volunteered to keep sketchbooks during the year of my residency and I know that they were almost all pretty terrified at the prospect.

Despite this, we had a lot of fun when we first met up last month. I ran an empowerment workshop for them, introducing them to new ways of thinking about drawing and painting. A lot of people's worries centre around their perceived inability to draw. But everyone can draw. The block is created because people feel their drawings don't in any way match up to reality. 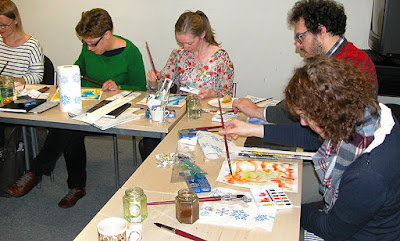 The important thing to realise, is that realism is just one benchmark of success and by no means the only or even the best one. I don't generally try to make my sketches look like what's actually there - I have the most fun when I free myself up to be expressive or think laterally.

My group all got a free kit of art materials which I chose for them, so I began by getting them to experiment with the various different marks you could get with them, so they were less afraid of the materials themselves, especially watercolour. I got them using lots of water and playing with mark-making techniques: 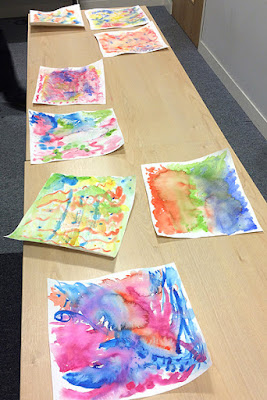 I also introduced them to some alternative approaches for getting across what we see. We started by drawing a simple 'drinking vessel' which I had asked each to bring in.

Instead of the generally frustrating 'realism' approach, we looked at the object from different perspectives and I asked the group to create interlocking line-drawings which explored alternative silhouettes of their object. We thought a lot about the spread as a 'design' too, letting the appearance of the open book become as important as the actual object itself. 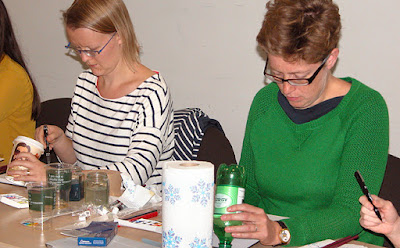 Instead of worrying about conventional shading and colouring of the objects, individuals painted the negative spaces they had created, then enriched the spread further by adding pattern and text, to 'tell the story' of the object.

We also had a lot of fun with blind-contour and wrong-handed drawing. 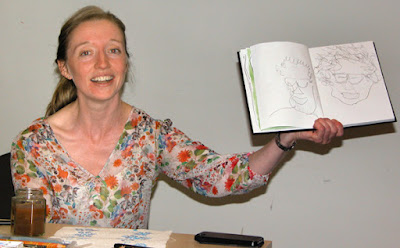 If you've never done it before, it feels very strange, but is also incredibly liberating. Instead of the hesitant, spidery-fine marks which beginners usually feel trapped into using, the drawings were bold and dramatic. Plus, they were done in just 1 minute each! 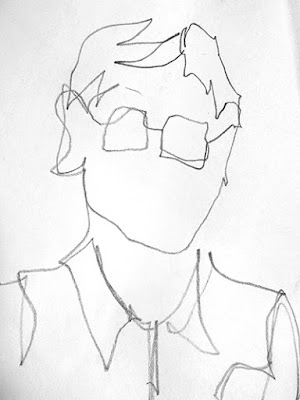 This 2nd meeting of the group was partly to review the homework task I had set them at the end of the workshop. Everyone had done really well, but one person had gone bonkers. He had no previous experience, but had been so liberated and inspired by the workshop, he had not only done the task I'd set, but then produced lots of watercolour paintings (really good ones too). I couldn't have wanted for a better result. 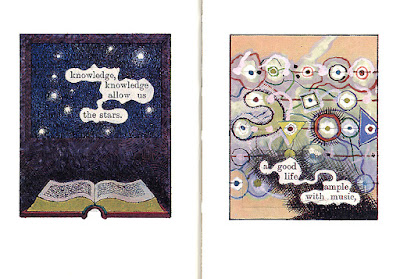 At the end of the meeting, I set a new homework task, based on the Heart of a Humament project, by the artist Tom Phillips. He took a rather bad Victorian novel he'd found in a 2nd-hand book shop and pulled new meanings from each page of the text, which he then illustrated, sometimes figuratively, sometimes decoratively.

Do I have to be first to comment again?? I blame my inbox and being tied to my desk :) I love your drinking vessel instructions and must have a go today - before going back to your session 7 homework, which is so inspiring to do. I bet the academics loved the session.

I have had a go at the Heart of a Humument project and had such fun that I had to say thank you for bringing it to my attention. I always seem to learn something when you post on Facebook and never fail to be inspired. Thank you.

Thanks folks and so pleased you enjoyed the Heart of a Humament exercise A. It's a game with endless variations, as Tom Phillips discovered. Can't wait to see what the group comes up with.