Yes, it's hard to believe, but Urban Sketchers Yorkshire has managed 50 sketching days since I started up the group in September 2010. We were called SketchCrawl  North in those days though, before we became officially affiliated to Urban Sketchers.

Our 50th outing was a pub-crawl sketching day in Buxton, last Sunday. We've been to Buxton a few times, and we did a pub-crawl in February, but Buxton's so lovely - there's still plenty to draw.

Here we all are, posing outside Buxton Opera House, looking a bit chilly: 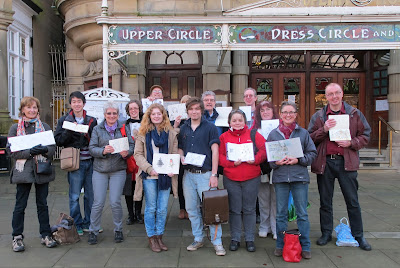 I can't take credit for the organisation of the day. Every now and then, other members host the SketchCrawls and Paul Gent, an artist who lives in Buxton, put together a schedule. He created this lovely map especially for the event: 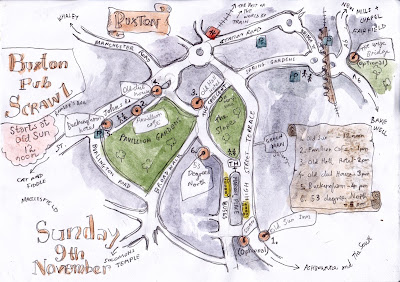 Apparently, he chose venues according to the quality of the beer, as much as anything!

We met up at The Old Sun at midday. I spent so long saying my hellos and giving out our new Urban Sketchers badges, that I only managed this quicky of Miriam and Matt in action, before it was time to move on:

Our 2nd stop was not a pub, but the Pavilion Cafe. We have drawn there before: it is great for drawing arial views down over the customers drinking tea below. It was also a good spot for some lunch, which meant I did more eating than drawing, but still managed this quick watercolour sketch:

Venue no 3 was The Old Hall Hotel, where most people sketched inside, but the sun had come out and it was pretty warm as long as you stayed out of the shade, so I nipped into the street instead and stood under a lamp post, rather awkwardly balancing things in the air as I painting the sketch at the top. I so love drawing Buxton Opera House.

At The Old Clubhouse, I drew the bar and barman:

At 4pm, about half the group had to leave, but the rest of us set off again, this time to The Buckingham. We chose the front bar, which had a nice big window. I drew the view, although it was already getting dark, so it was a race against time. I just got it done, as it got truly too black to see:

Weirdly, when we arrived, the room was empty, but within 5 minutes it was heaving! We pressed on to the last venue of the day: a quirky cafe/bar called 53 Degrees North. I drew the candlestick at the top and then just had time to do this sketch of Andrea, Matt and Eileen: 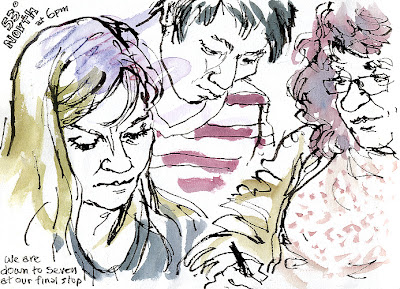 We did our usual sharing session, inspiring as ever, and then finally headed for home at 7pm after a really lovely, very sociable day out. We will celebrate our 50th again at our Chrismas party next month. Can't wait!

Thanks Caroline. A piece of white conte for highlights really lifts work done on the tinted paper. I keep meaning to get one of these white goache pens, but actually the raw texture of chalk is nicer sometimes.