It made a nice change for me on Wednesday, to do a school visit where I was not only working with Y10 Art GCSE students, but where the day revolved around sketchbooks, rather than illustration workshops. I had a very keen group of about 10 girls and, along with their lovely art teacher Mrs Davis, we embarked on a SketchCrawl around the school. It was for the start of a drawing project called 'A Sense of Place' - a great idea. 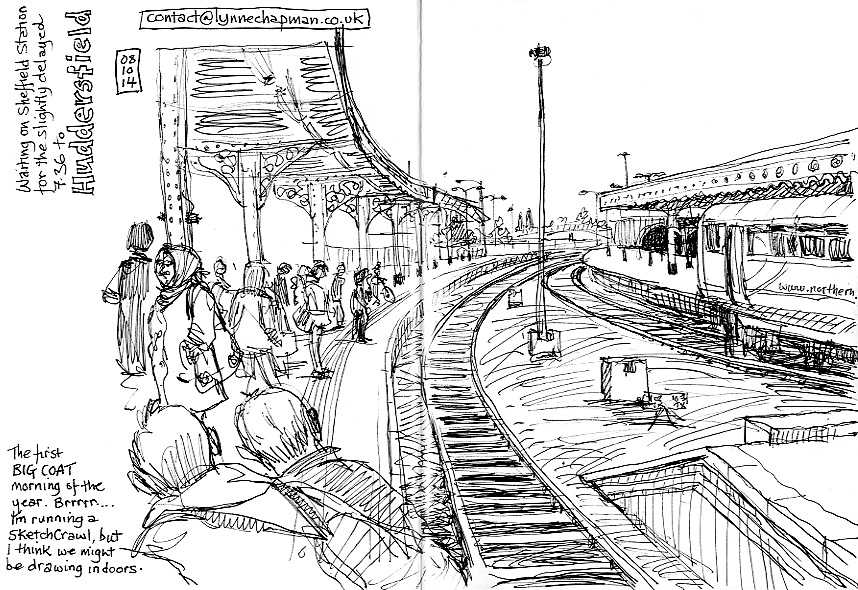 I showed them some of the work I had done in Brazil and Sitges, to get them in the mood. They got just as excited as me about the concertina format I've got so into lately and Mrs Davis is quite keen to create some with them. I was also able to show them a couple of sketches I had done on my journey there (immediately above and below), which went down really well. 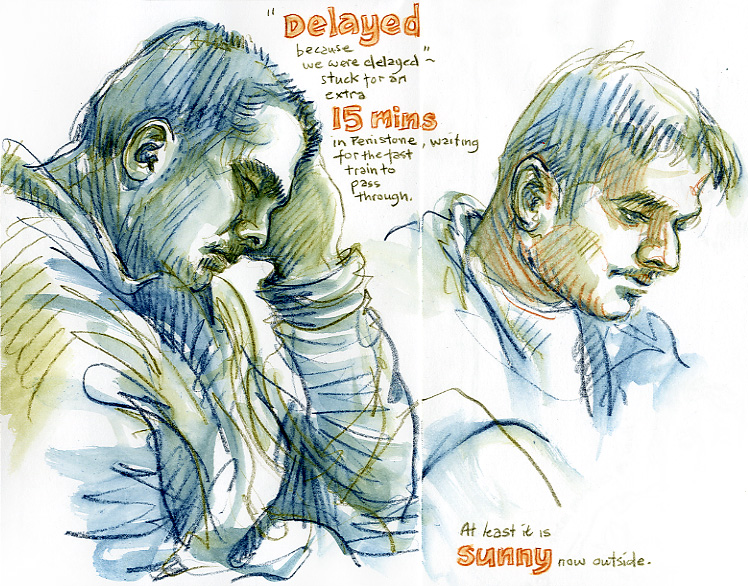 Mrs Davis had bought each girl a new A4 sketchbook and a 0.5 fine-liner so, armed with these and some black brush-pens, we headed out. It was a bit chilly. I was well wrapped in anticipation, but many of the girls were coatless and one or two hadn't even put on their woolly tights. Brrrrr.... They were very good though and set-to without any serious complaint. 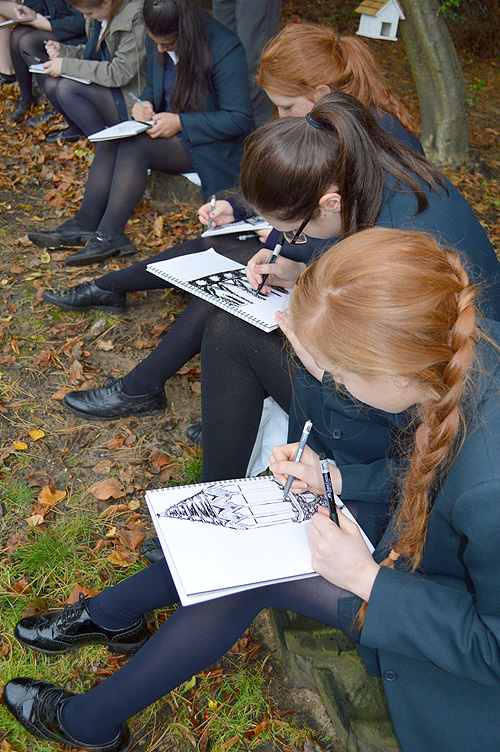 Huddersfield Grammar School is a bit different. They are about to open a new-build extension, which is rather lovely, but the main section of the school was built in the 1860s, when they knew how to make things truly sketchable. We were spoilt for choice: the gorgeous stone windows, the decorated pillars, the Gothic porch, the stained glass... 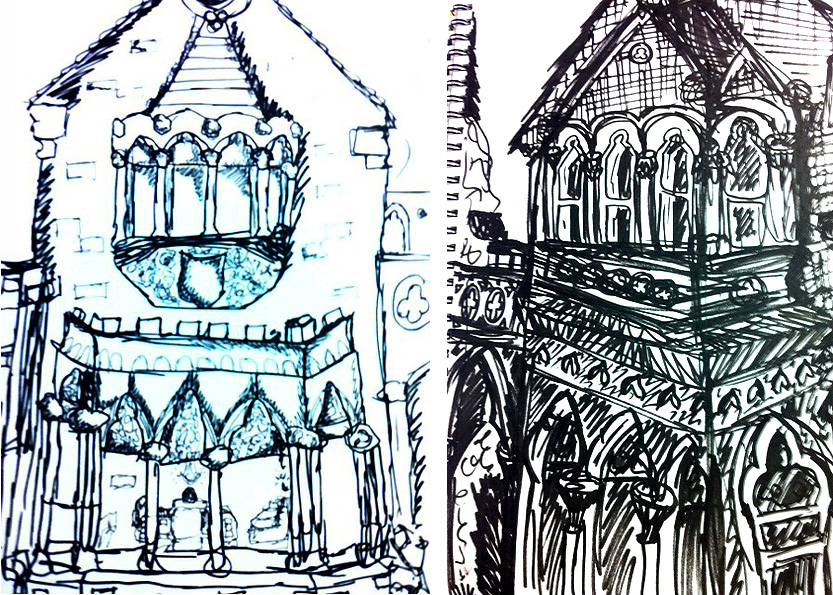 We each managed two sketches before break. The girls were really up for it and did some really strong stuff. Above are a couple. Remember: this is straight in with black pen, no pencils, no rubbers. I drew alongside them, just offering little bits of input where they seemed to need it.

After break we took pity on them and headed indoors, first into the library, originally built as a rather fancy Billiard Room extension, in 1893, and then in the hallway with its oak staircase with torchere statuettes on the newel posts, Art Nouveau windows and a bank of beautifully decorated, brass light switches, which took several people's fancy. 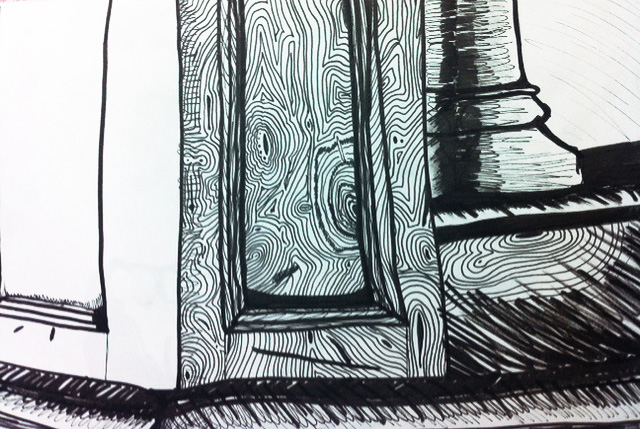 I did a few quick drawings (the 'sorry's below were because we were sitting on the stairs just outside the staff room and teachers kept needing to get past), but I spent more time going round offering tips and guidance this time. It all seemed to go really well and everyone worked really hard. I love the carefully drawn grain above. 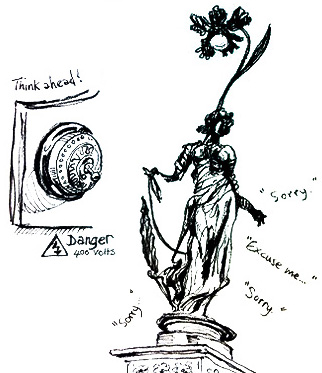 We had a late lunch and then headed back to the art room to finish off with something a little different. As everyone was so taken with my train portraits and the Drink-and-Draw series from Brazil, Mrs Davis decided we would attempt something similar. We all sat round a long table and I started them off with a 5 minute contour drawing. They found that quite hard, so we made it worse, by asking them next to do blind-contour drawings! There was a lot of giggling at the results, but it's a great warm-up exercise and creates some strong line-work. This was my contour drawing: 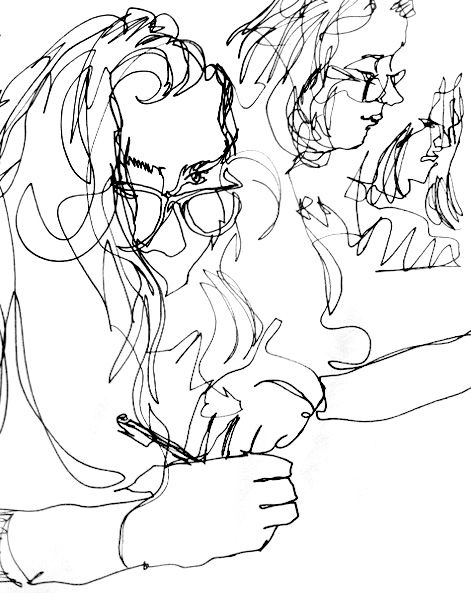 Then we handed out watercolour pencils - just 3 colours each: a dark blue or purple, an orange and a lighter blue. It's a great idea to limit your palette with watercolour pencil sketching and I wanted to demonstrate how it's so much more important to stay true to tonal values than colour: mad colours are fine, as long as the tones are right, but the reverse isn't true.

I did a quick demo of how to use water: quickly and boldly, once the sketching is done. It's a technique that takes a bit of getting used to, but I think some of them were quite surprised at the strength of their results and amazed at how well the crazy colours actually worked. 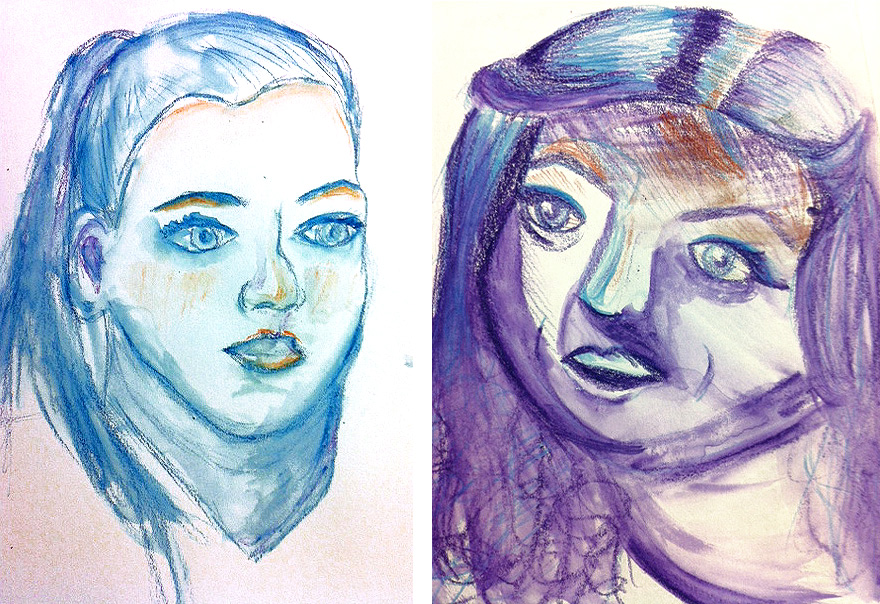 At the end of the day, I was slightly early for my train and reckoned I had about 20 minutes sketching time. There are some lovely buildings around the station, so I stood in the entrance and drew the sketch below. I just got it finished in time but, as I headed inside for my platform, I discovered my watch was slow and the train was about to leave! I made it by a whisker. 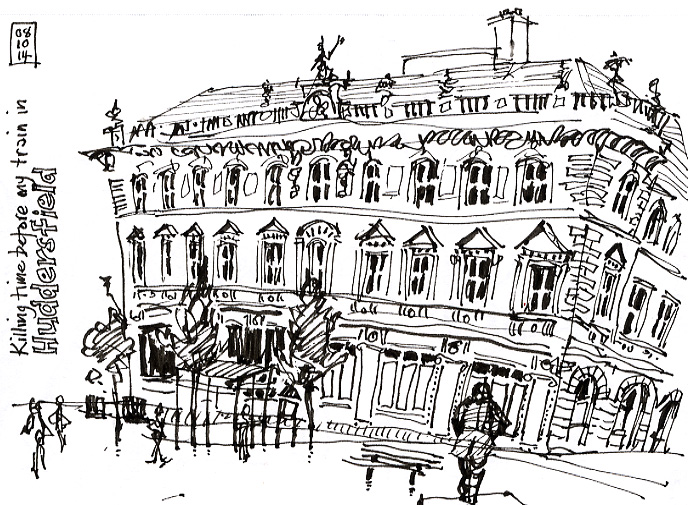 below are sketches I did on the way home of course. The lady opposite was very obliging and dozed in about as many up-the-nose poses as was humanly possible: 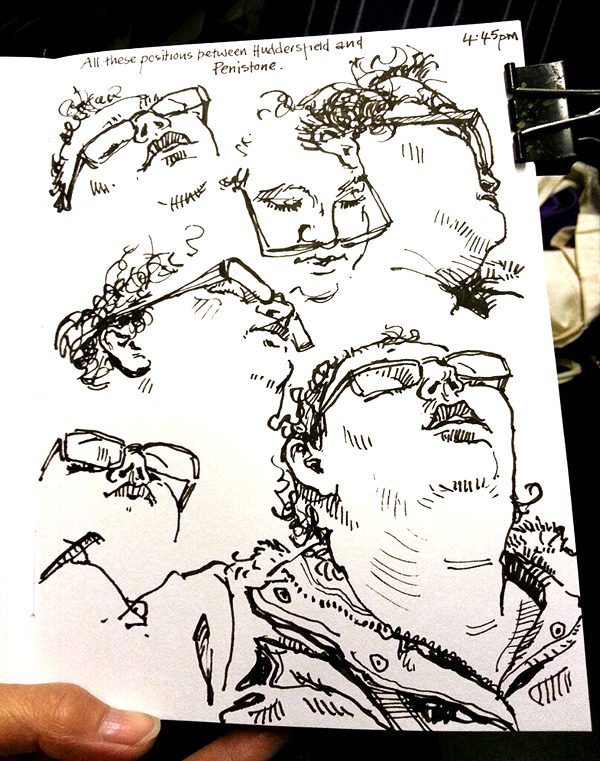 Thank you to Mrs Davis for inviting me to be part of your project and to all the girls for your hard work and enthusiasm. I believe that some of the sketches we did are going to be made into a colouring book of the school - it would be great to see a copy of that!