We had another SketchCrawl just over a week ago: this time we went to Huddersfield for the day. I was hoping for warm weather, as I really fancied drawing outside, but unfortunately it was decidedly chilly, with a bitter wind. Our first stop was drawing in and around the station.

It's a lovely old building but, what with the cold and the unlucky timing  (we discovered the whole facade was covered in scaffolding) a few of us headed back into the station to draw on the platforms. This is the view from platform 8 where I was lucky enough to find a train that was not in service, so stayed where it was for the 45 minutes we had: 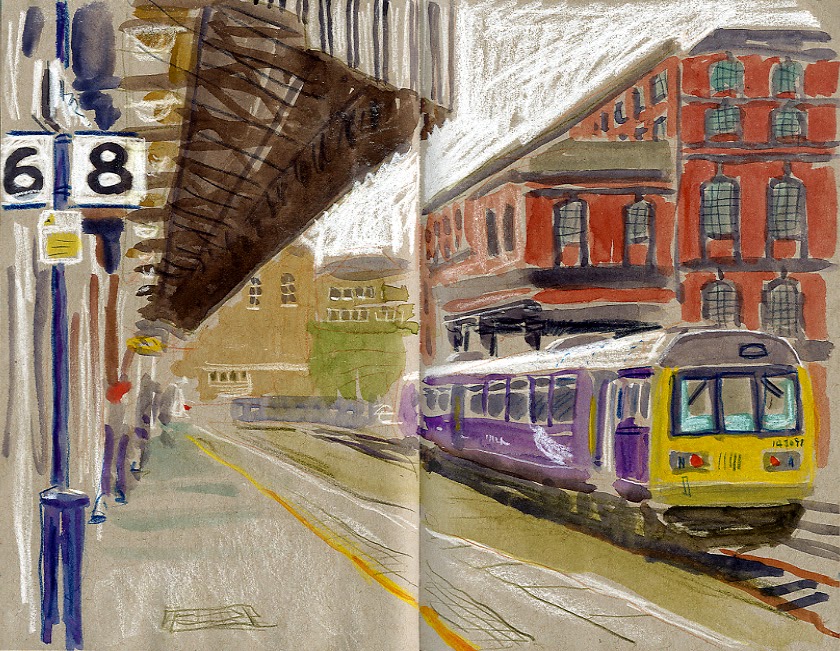 Next we went to Byrams Arcade. One of the locals said we might get a good view out from the top, so about half the group headed upstairs. We weren't sure if we were supposed to be there, as it was all empty shop on the top storey. To get to a window, we had to be in one of the shops. I tried the door... it opened. I'm totally sure we weren't supposed to be in the shop itself, but nobody was there to tell us off, so we all huddled together in front of the big window and drew this amazing array of chimneys: 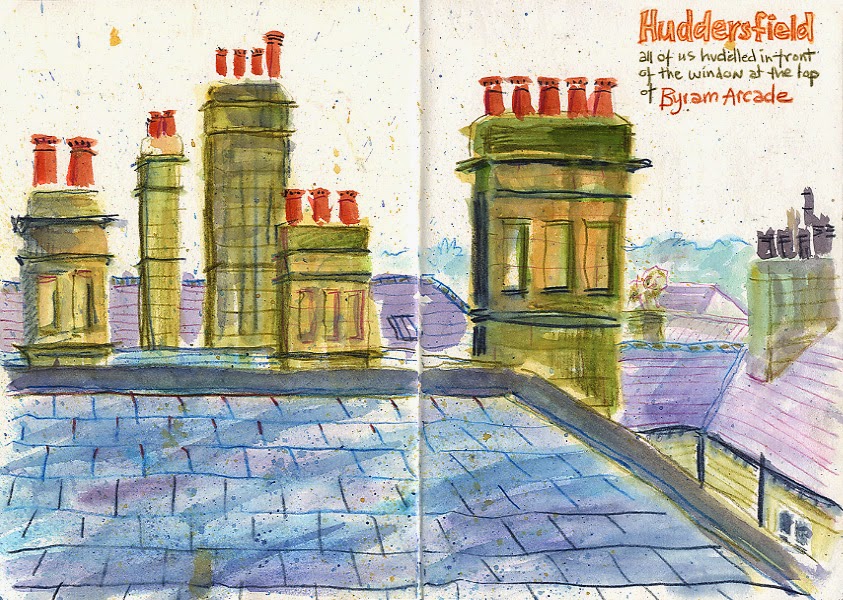 Next stop was lunch - hurrah! There was a fabulous cafe in the arcade which luckily had a back room. We pretty much filled that. We had coffee and, while we waited for our food (which was gorgeous), I sketched my cup: 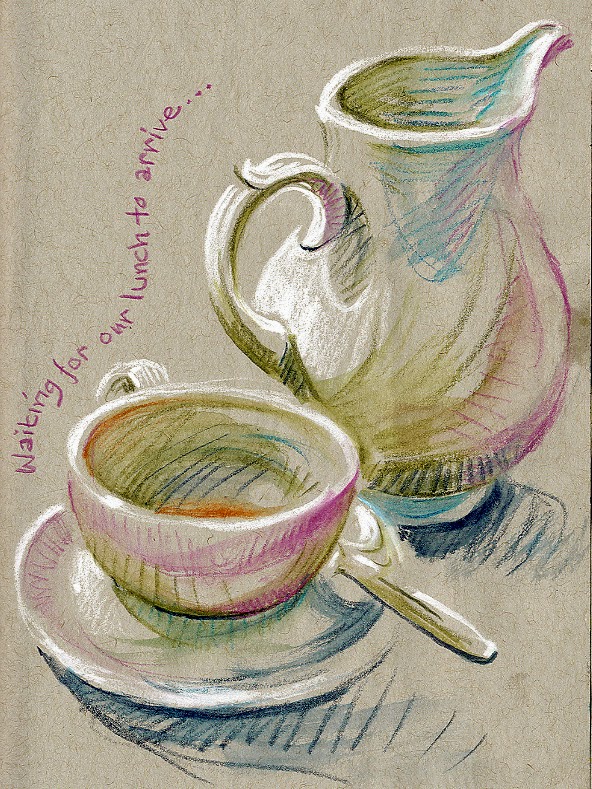 We headed for the market next. It was a big area, crammed with all different kinds of stalls, selling everything from fruit to guitars. There was a lovely Victorian cast-iron roof in red and blue which I was tempted to sketch but, in the end, I found a little corner with a step to sit on and a view out to the street. I was next to a stall selling CDs, so I got great music while I worked. I also captured a few of the group on the other side of the road: 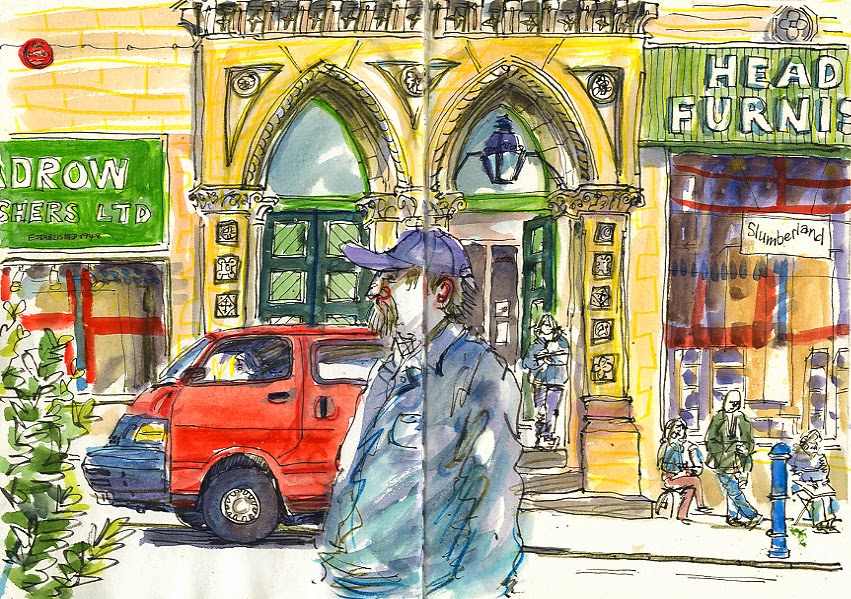 Several people stopped to chat to me. One man got very excited and said over and over that I should go onto Britain's Got Talent!

Our final sketching stop was Huddersfield Library. It was raining by now and most of the group had got cold, so they headed inside to get warm and dry, but there was a shopping centre opposite, which had an overhanging roof, so I sat in a closed shop front, sheltered under the overhang, and drew the building itself: 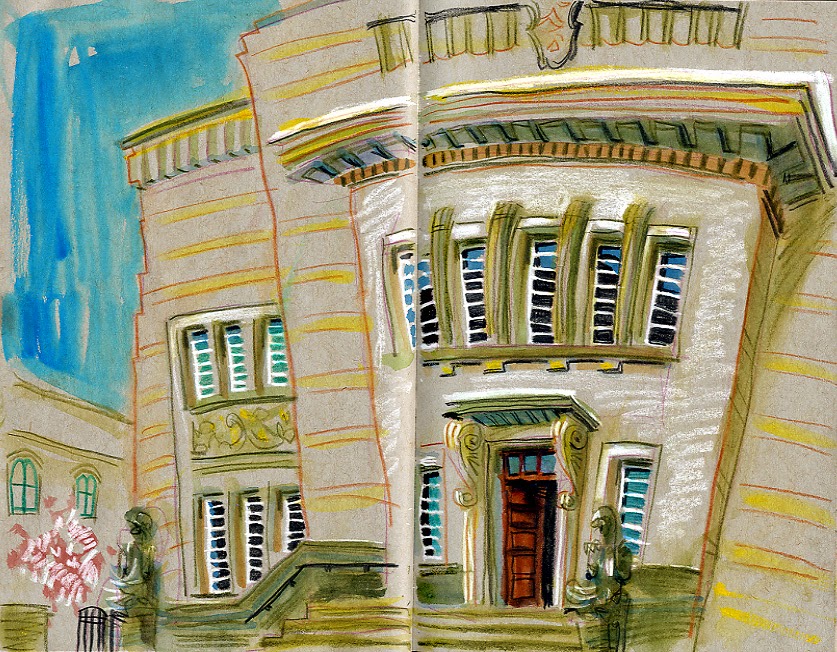 A small girl and her mum came by and watched for a moment on their way to the shops. On their way back they stopped again. They didn't say anything,  but the little girl gently passed me one of her sweets. Cute.

We went to another cafe to share the work. They were selling very tempting cakes, but I resisted and just had a mocha. As ever, there was a great variety of very interesting work to look at. We chatted around a big table, passing the books round, oo-ing and ah-ing and occasionally holding one up: "Who did this?".

Thanks so much to Matthew and Peter for their help in choosing the sketching venues. Another smashing day out in great company! If you want to join us some time, drop me an email.

That would be something: to see a visual artist on Britain's Got Talent. Ha! I love your sketch of the teapot and cup. You do beautiful work.

oh dear you've made me feel quite home sick! Hudds library is what did it! Glad I am visiting my folks soon! love your sketching most inspiring. :) Amy

I have chuckled throughout this post especially at the image of you all sneeking into the empty shop to paint the chimneys.

Fabulous sketches. Love how you did the cup, I may try to emulate your style at my next costa stop :)

Incredible work! You are an inspiration for me, working on books. You have a great style, very glad I found out about your work this year.

Thanks all. Much appreciated :-)