The Tyranny of a Cast of Thousands

OK, teensy bit of an exaggeration, but one slight frustration I've discovered with pastelling the artwork for the new book is that, because it features such a large range of very different animal characters, all of whom repeat again and again across the various pages, with lots of spreads where either all, or most of them appear together, I am finding it hard to relax into the colouring. 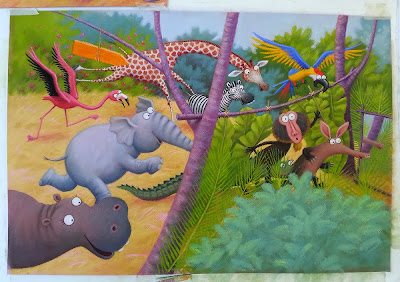 Instead I am constantly having to check precisely how each creature was coloured last time. I find myself spending far more time referring back in this way, pretty much 'copying' my earlier versions of the creatures, than being freshly creative with colour and mark-making.

This issue with a large cast is further exaggerated by the fact that each character has two guises: one as themselves and one as their 'swapped' version. I'm finding the constant complexity a little stifling.

The last spread I showed you and the one above, which I recently finished, are both good examples. This one is the spread where Lion's 'swap-shop' idea is unveiled and they all rush in to look. Luckily, I don't think my frustration shows in the work and I am still really pleased with how it's come out: 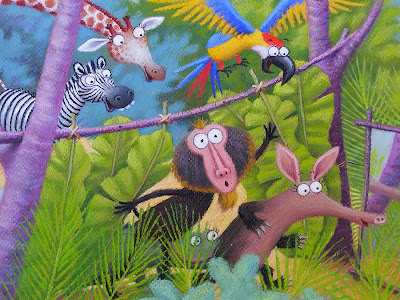 With this problem in mind though, I decided I would next jump to the penultimate spread, the one where Julia's text says 'Later that night...', giving me the excuse for my sunset and a completely different set of colours. It's the spread that follows the one below, where I tried to suggest it was getting late, by cooling down the palette and adding a bit of mist to the trees: 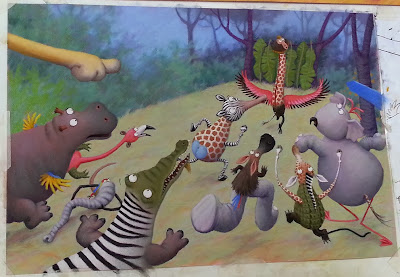 The sunset spread is just as stuffed with detail and includes the full cast of characters again, but I have been looking forward to playing with my new colours and having fun with the reflections in the evening waterhole: 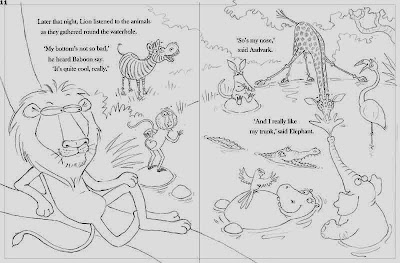 I'll keep you posted on progress!

They still look amazing, Lynne. Re-drawing the same character or characters is always a challenge I find.

They look amazing and your frustration doesn't show in the illos:) Your are doing an extraordinary work:)

The illustration still look really fun tho! I can't wait to see the complete book!

Yes, really beautiful work for such complexity and need for continuity!!