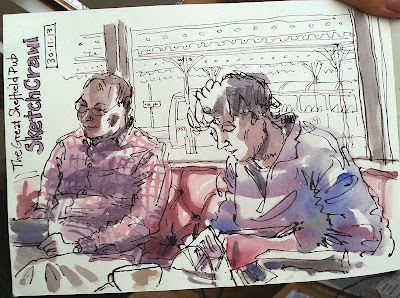 Last Saturday was SketchCrawl day in Sheffield and this month, we decided to do a pub-crawl: a pub-SketchCrawl! Actually, it wasn't my idea. Paul Gent, a new member of our merry band, suggested it and did all the organisation, which was very welcome (thanks Paul), as I have been so busy lately. 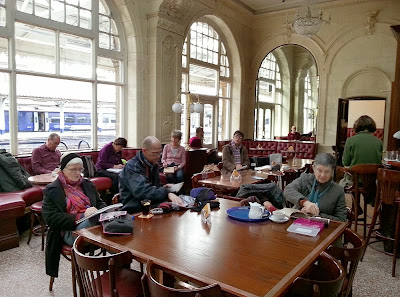 We met at the Sheffield Tap, at the station, to make life easier for people coming from outside the city. It's got a fabulous, high-ceilinged room at the back, lined with decorative Victorian ceramic tiles and hung with chandeliers (yes, really!). On one side of the room all the highly-polished, brewing equipment is on show, on the other are windows which look out at the platforms and trains.

It's often too busy to appreciate, but at 10.30 in the morning the room was more or less empty, except for about a dozen sketchers, hard at work. 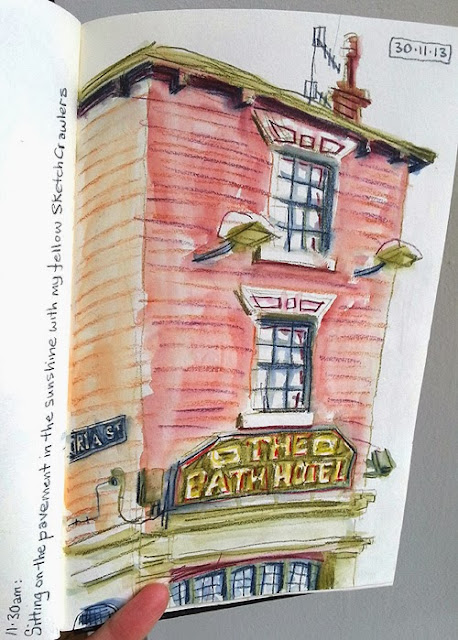 We walked across town to the Bath Hotel next. Unfortunately it wasn't yet open, so we had 15 minutes drawing from the pavement outside, until the landlord arrived and kindly opened up early to let us into the warm. I sketched the other Lynne in the group, who also has spiky hair: 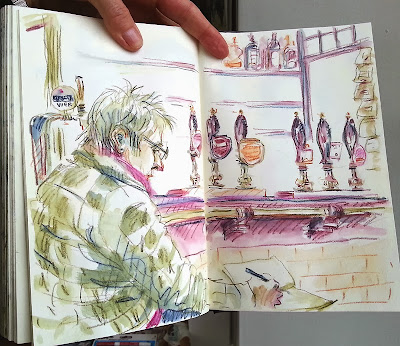 Quite a few new sketchers arrived at this point and we about doubled our numbers.

Third stop was the Red Deer, just round the corner. They've done it up a bit since I was last in there, but not enough to spoil it, thank goodness. I found a place near an open fire. I had been on tea and coffee up to this point, but spotted that they were serving hot, spiced apple juice with a shot of rum: irresistible and as delicious as it sounds. 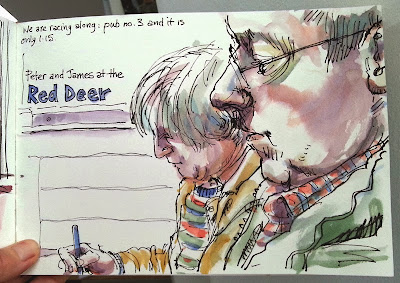 It was shortly after this that the plan went a bit skew-whiff. Paul and a small group headed off early to pub no 4, Fagan's, while most of us finished off our drawings and a few finished off meals. Then we realised that Paul's plan for pubs 5 and 6 involved a bit of a trek, heading further away from the city centre. We decided when we got to Fagan's, we'd suggest axing the last 2 pubs and swinging back towards the station again. But, by the time we got there, Paul and his band had already left.It was then that we realised nobody had Paul's phone number. We left a message with the landlord at pub no 5, and got down to work. Several of us did surreptitious sketches of this poor stranger, first eating his lunch, then reading a book. He didn't complain, I'm not sure if he realised: 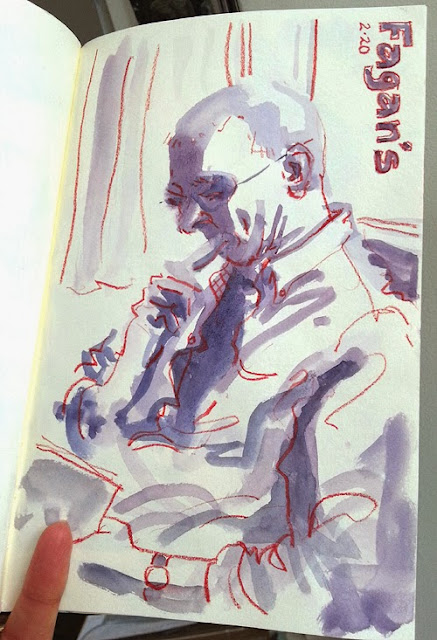 We then focused on Stefan, one of our number, who made the mistake of sitting in the centre: 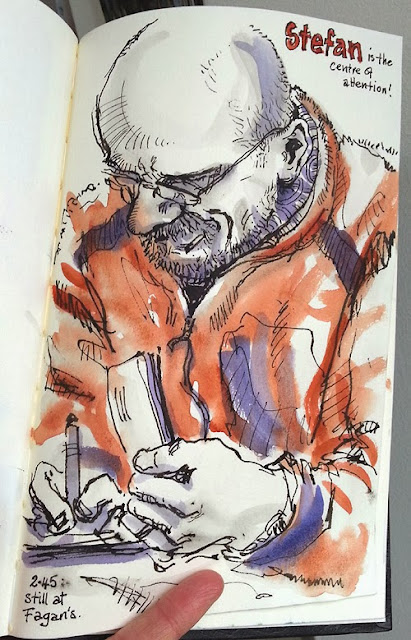 The last stop, for the main group at least (we never caught up with the off-shoot group again), was back at the Sheffield Tap. It was busier now, but we still managed to get into the beautiful back room. 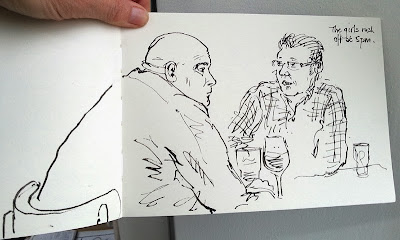 We began attracting attention from the other drinkers who offered critique, mostly positive (!). You can see the brewing gear in the background of the drawing: 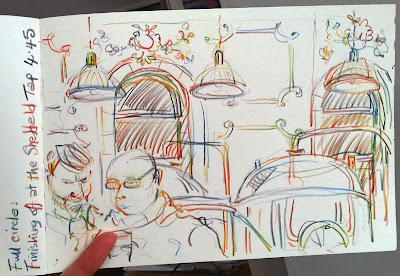 When the last stragglers went for their train at 5pm, I walked back up into town and caught a bus home: the end of a lovely day. And we'd had 3 first-timers, which is always nice. A pub-crawl was the perfect way for them to begin sketchcrawling as it turned out, since we were able to chat more than usual, over our beers or coffee. while we sketched of course.

These are wonderful and you catch the intensity of the sketcher well. Is it a telling thing that every one of these sketchers is looking at the sketch and not at the subject? Reminds me of so many students over the years. But, hey! They're drawing.

Thanks Lee. To be fair to my fellow sletchers, they were looking both up and down in equal measure, but I had to choose one position or the other. I chose down, but it could just as easily have been up! Know what you mean about students though...

Lucky Stefan! Love your sketch crawls! Did you guys partake while sketching?

There was definitely the occasional pint consumed, especially by those wayward male sketchfolk. I had a party that evening though, so kept to the tea and coffee apart from my lunch time tipple.

All are welcome Stephan. Drop me an email to join the listing and get details in advance.

How long did you stay at each pub? Looks like so much fun. What were the approximate sketchbook sizes? I want to do this.

It varied Tascarini: 45 mins to just over an hour mostly. Sketchcbooks people used varied from A6 - A4. I used something in between.

Thanks for the information Lynne.
I think it would help to have a time limit. When I go out to sketch I can sit there on one sketch for 3 hours without realizing it and then it's all messed up. Lol. I will try the time limit. Thanks again.