Drawing Hands: John Stands (Sits?) in for a Lion

Hands are always tricky. Getting the thumbs facing the right way, drawing the angles correctly, especially the bend of the wrist...

I often find it easiest to look at my own hands and I have a mirror in the studio, so I can pose. But, because of my foot op, I have not been working in the studio. The foot is healing really well, but it still needs to be elevated as much as possible, so I have been continuing to work from my armchair (ever cloud...).

Anyway, earlier this week, I wanted to draw the lion from Jungle Grumble clapping the other animals, as they strut their stuff after their mad swaps. I had a couple of quick goes, but it wasn't looking right at all. I had the upper hand all twisted and even the other one looked a bit odd.

So, when John came by with a cup of tea, I got him to pose. He had to sit on the floor, to get the angle right. The extra flourishes, in the 'roaring' department, were his own idea (he really threw himself into the role!). 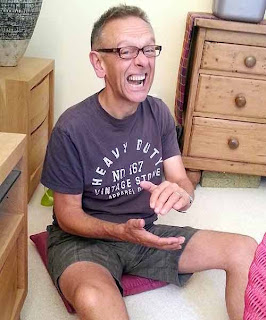 I did a very quick sketch, capturing the shapes but imagining his fingers as being more dumpy and paw-like: 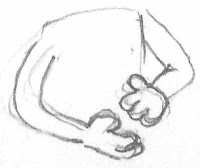 I then transferred the pose to my lion. This is a detail from the final rough of the spread. Much better: 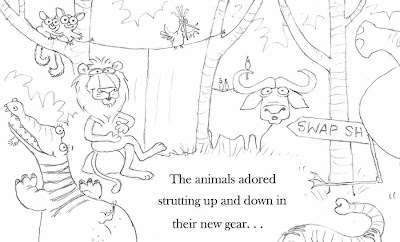 How great to have your own lion impersonator - a proper treasure!

I thought he was about to sneeze! - (Don't tell him I said that, he might be upset after his efforts at the theatricals). Love your drawings, very good idea having a model to work from.
Glad your foot is coming along well...my op is tomorrow!

Although I don't think John would frighten me in the jungle, I can't wait to see his stand in for the 'Blue bum Baboon' !
Love Mum XX

A promising beginning to a new career!

Poor John, what a torment it is to be married to an illustrator .. (Marc Dewelde on the computer at the office)

An applause for John:) he's been a great model,love the illustration:)

Wonderful. Love your blog and your videos and all the wonderful and important details you share about illustrating and the business of it, too. It's all a treasure!!!

Thanks everyone. BTW: I hire John out for weddings, parties etc if anyone is interested? :-)