SketchCrawl at the Yorkshire Sculpture Park

We had a lovely day last Saturday. John and I drove up to Wakefield, to the Yorkshire Sculpture Park, where we met up with many regulars, but also several first-time SketchCrawlers. There were at least 25 of us, which was a really nice size group: enough for the event to feel really well-attended, without so many that you are a mob.

The weather started off looking a bit dodgy: still pretty warm, but very overcast with iffy clouds which might turn nasty. We all sat on the grass in a ring around this sculpture, by Plensa Borofsky. You can't really tell the scale from my sketch, but it is MASSIVE and towered above us. We only had 30mins, which was a bit daunting, so I used my Inktense pencils, as they are great for super-speedy colour work. 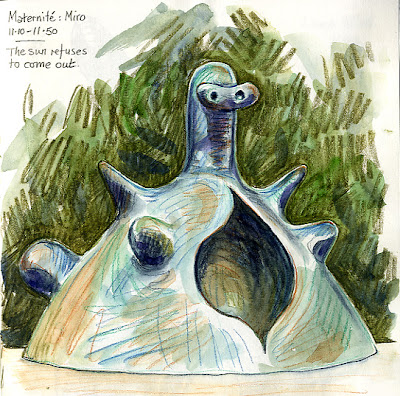 The future of the weather was still uncertain as I was drawing this great Miro character. John and I visited the Miro show when it first opened and I the drew some of the other cute characters. I love them. Wouldn't it be great to be mega-rich enough to have something like that in the garden at home?

By the time I had finished drawing the Miro below, it was starting to brighten and we were able to have lunch in the sunshine. 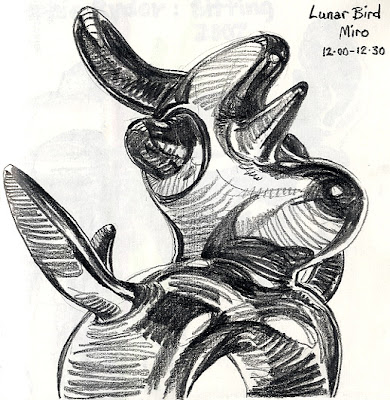 We next moved down the hill a little, to the Camellia House. Some people drew the trees inside, some drew the little glass-house itself. I didn't feel inspired though, so had another go at the half-woman-half-rabbit sculpture by Sophie Ryder. Last time I used graphite and watercolour, so this time I tried mimicking the wire (it's like a huge Brillo-pad!) by using a fine-liner and then just a little watercolour to tint. 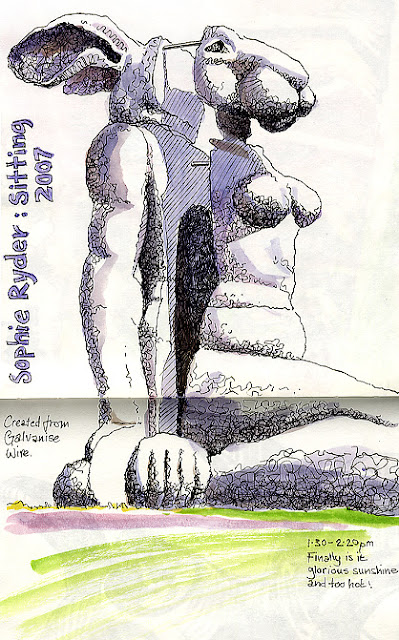 The last sketch was Seated Figures by Abakanowicz. Back to the comfort of my watercolour pencils, as I wasn't at all sure what to do with this one. There were far more headless figures than I've drawn, in a long line. It was crying out to be drawn in perspective, but the technical stuff looked like a lot of work, so I concentrated on colour and mark-making, to capture the essence instead (a crafty cop-out). 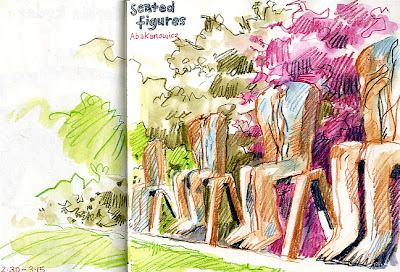 An unusual twist to the day was that the Open College of the Arts, who created the filmed interviews done in my studio, were making a short film of our SketchCrawl. They filmed us at work throughout the day and then did an interview with me afterwards about SketchCrawling in general. I will put the film on my website when it's ready, as the OCA have generously let me and the YSP use it.