Drawing a Picture Book: a 2nd Round of Re-draws


This week I am working on Swap! again.


I sent the last of the re-draws off to the publisher a few weeks ago. Normally they turn them round really quickly, but it's holiday time of course. Actually, I didn't mind the delay: it did me a favour and gave me time to fit in all those library workshops. 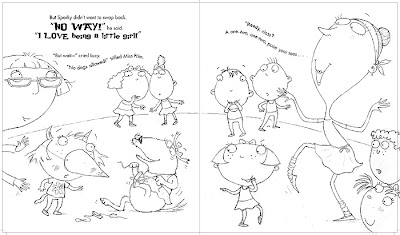 We are so nearly there now: just one spread that needs a 2nd redraw and some extra work, creating a different set of endpapers for the front.


The redraw is the illustration of the ballet class above. It's the part of the story when Lucy discovers she can't swap back to being a little girl again. My art director felt their dialogue needed to be closer to them, as this is a crucial turning point in their relationship. But Mum is in the way, so she suggested I incorporate more parents and sit Mum with them at the back, creating a new space for text in the middle: 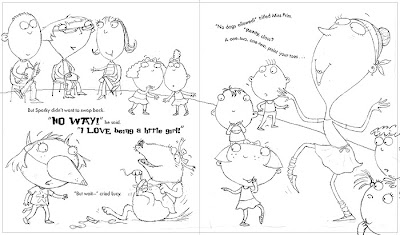 It's not awful, but I'm worried things are too busy and slightly 'bitty' now, with so many characters. I spent ages yesterday afternoon, moving the various elements around in Photoshop. It would be compositionally better if the parents were smaller, to provide visual contrast, but then they would look too far away, turning the space into a massive hall.

I got a bit blind to it in the end, so John came to help and provide a fresh pair of eyes. He suggested I go back to the original and work harder at moving Mum out of the way. 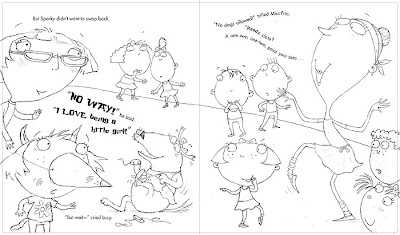 He also suggested trying Lucy much larger, which does indeed make for a more dramatic composition. It means she's not quite as close up to Sparky for their disagreement, but the overall effect is less fussy. I have sent both versions to my publisher. I never normally recommend providing alternatives; my experience has always been that, if you offer 2 choices, the client always like a little of one and a little of the other, so you end up having to do a 3rd version! Let's see...

I liked your last drawing.

John will be pleased!

I think your 3rd image is a better solution, but it is still a bit cramped.
My other concern (and this is ONLY a personal point of view so please do not take offense at all, your design and style is your own to decide) ...is that the size of the human's heads seem to be excessively large for their bodies. I know we exaggerate heads, but it seems more-so on your people than on your animal characters.
Would slightly smaller heads to body ratio perhaps give more space for text? Just a thought, I do like your work so much, so please don't be upset by my comment :)

You're right about the heads June, but that is the style throughout this book. I have done it deliberately: it is harder to make humans appear non-realistic than it is with animals. I'm keen that the characters look quite stylised to give a specific flavour to the illustrations. Taking greater liberties with proportions helps to do that.

It's really interesting and informative to watch your process. Thank you for sharing, Lynne!

I think the 3rd image is the best, you and John are great team! I love your humans, the big heads make them stand out, also more room for facial expressions! My little girl who is almost six has a thing for facial expressions and thanks to picture books (many of yours:) she can draw different kinds. Handy body language skill!

That's great to hear Irene - facial expressions and body language are the key to it all. Say hello to her from me :-)

I agree with your thoughts.
I wonder . Color version of the study.Wonderful colors in your work.
Thank you for sharing,Lynne.