My latest book has been going under the working title of Dogswap for most of it's life thus far. I originally called my story It's Not Fair!, because that's what Lucy thinks when she wakes up: it's not fair that she has to get up for school, while Sparks gets to stay home. Hence the role-swap. 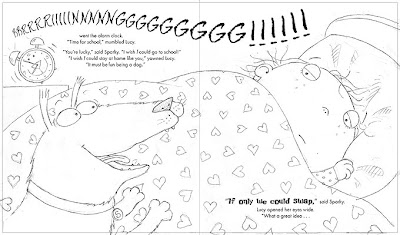 But It's Not Fair! is too negative, so my editor came up with Dogswap. But that makes it sounds like two people swapping their dogs, which is a very different thing. I suggested a list of possible alternatives, the best of which was Dog Day, but we're not satisfied with that - it's a bit limp, compared to the fun and anarchy that you find inside the covers: 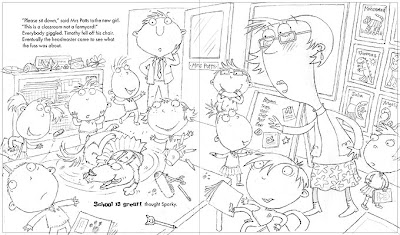 It's unusual to get to this late stage with the title still in the air, but not important. But we need to make a decision soon, as we must have everything sorted by mid September, ready to present the finished project to overseas buyers at Frankfurt Book Fair in early October. This is our  opportunity to get other publishers interested in co-editions. So we need a proper title. Here are some of the other things we've come up with and rejected along the way:

I LOVE being a little girl! - Sparky says this a lot, but it could turn off little boys;
I Love Being a Dog - pulls attention away from Sparky, who is the funniest of the two;
I Want to Be a Dog - as above, also a bit close to Lydia Monk’s I Wish I Were a Dog;
The Very Furry Little Girl - doesn't sufficiently indicate the theme;
Swap back? ! - doesn't make sense if you haven't read the book;

And so, we have decided to go for short and snappy: just plain SWAP?!? That should give me plenty of scope / space to draw something funny and eye-catching. Watch this space! 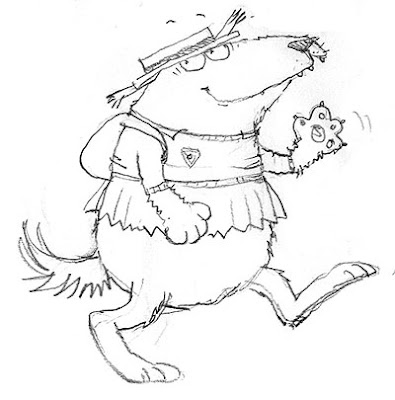 Paws and Swap is a palindrome, this may be a little too much for young readers, and I've been racking my brain to come up with a title using it :) Let's swap paws? Oh well, worth a try?

Such happy, fun pictures. What lucky children they will be who get this book. Funny how important a title is, but it's always what drives to look at a book or film or artwork. Really do enjoy your drawings.

Hmm, Sure it'll come to you soon!

I like the palindrome title 'Swap Paws'.
Possibly the cover could be Lucy looking in the ballet mirror with Sparkys reflection and the title 'Swap' reflected back as pawS, but paws could have letters written wrong way around, eg backward S, like little kids do when first learning to write.
On the back cover Lucy and Sparky could be giving each other a Hi-five (another 'hand-paw' connection) thus bringing their friendship together again.
Thats my tuppence worth hehe, cheers and good luck.