Illustrating a Picture Book: Getting the End Right

I abandoned John again last Tuesday. As we speak, I am in Santo Domingo, sketching my hand off at the Urban Sketchers symposium. In the meantime, I thought I'd leave you with this 2nd post about the changes I've been making to my roughs for SWAP?!?

You remember there were 2 major redraws needed, as a result of feedback from the publisher: Lucy and Sparky leaving ballet class, which we looked at recently, and the final spread. 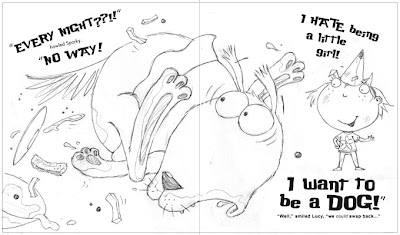 At the end of the story, Sparky finds out that little girls have baths every night. At last he wants to swap back.

Originally I had Lucy enjoying the bubble bath Sparky didn't want to have, with him sitting on the loo beside her, reading 'Ballet for Dogs'. But the text has changed slightly since then. Now the same conversation flows across both pages, so it makes no sense for them to be in a different part of the house.

So in an earlier drawing, I introduced a window... 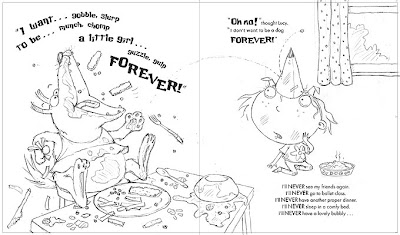 ...through which Sparky could escape the bath, ending up in the back garden. I thought that would be quite funny: 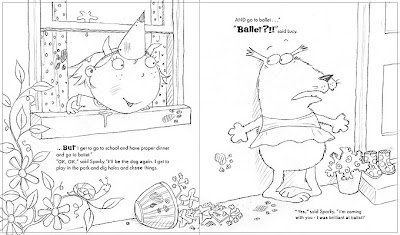 Except, my publisher rightly pointed out that, since this is where they make up their disagreement, it needs to be a more intimate illustration. We need them side by side, clearly back to being best friends again.

I like the plan of ended on a cosy, cuddly, positive image: always a good idea for a picture book. But I had to think of a new way to add humour. So I drew Lucy picking food out of Sparky's fur while they talk. This also has overtones of the kind of grooming that animals do, which is also very intimate and about bonding. 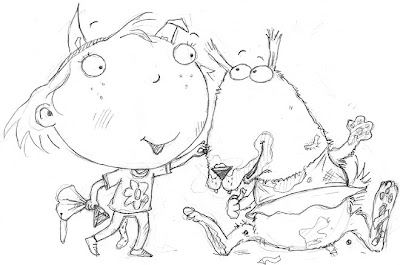 I originally wanted her picking a chip from his ear, but her arms just aren't long enough, so I settled for a pea squashed in his fur.

I have been having trouble though, working out how to place this image on the page, because of the gutter. It shouldn't go through anybody's face, but there's no room between them, without losing what Lucy's doing. I've sent it to Gullane to see what they think and if they have any brilliant suggestions!

It is such a lovely image!!I see the problem with the gutter :(.Maybe if Sparky was drawn in a typical dog position, since after all he is going to be a dog again, in his four legs,maybe the gutter would be around his neck area..and fill the remaining space with something humorous.( Also Lucy could pick that chip out of his ear!)Just an idea :)

and reducing the size of both a bit to fit properly, forgot to say! Sorry for two comments!:P

Great suggestion - I'll give that a go. Cheers Irene!

I never realised an illustrator's life would be so difficult in the sense of having to draw and develop text and then have to abandon it and find anothervroutevto completing a book. You are greatly to be admired for your positive way of being able to cope with this. ( thank heaven I never wanted to be an illustrator!)