I have been going to life-drawing at KIAC on a Wednesday evening for about 6 months now, on and off. It's great fun and really good practise. However, while the rest of us draw, Andrew, who has studio-space at KIAC, always models in clay: 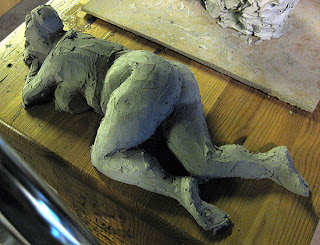 I am continually astonished by how lovely and how true his little (and sometimes not so little) figures are, especially given that the longest post is less than an hour, and some of his little figures are done even more quickly. 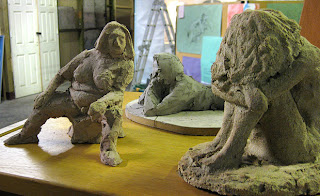 Anyway, I was obviously not the only person who was intrigued. There was so much interest that Andrew decided to run a series of life-modelling sessions in the same space on the Thursday night. For a fiver per 2 hour session, plus the price of the clay, anyone who is willing to sign up for 5 sessions in a row can give it a try. Well, who could resist? 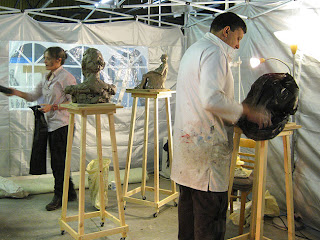 We each have one of these wooden stands on wheels. The model sits in the middle, with us all in a circle around him, then we occasionally wheel round, so we have different views. The photo above is us clearing up at the end - we have to cover our creations in bin-liners, to keep them moist for next time. 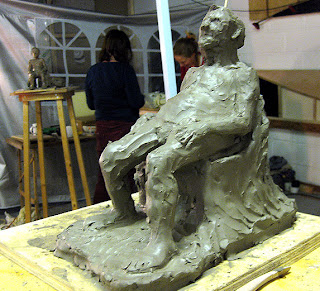 This is my effort after week one. I found it very hard to get going and had a very 'elephant-man' style lump for the first hour! There's no tuition, you just learn as you go along. It felt totally unlike drawing: though I am now very practised at 'looking', the process of creation is so entirely different. The only time I have ever done any sculpting before was last year in Hay, when I did a 1 hour fun session, immediately before my storytelling event. 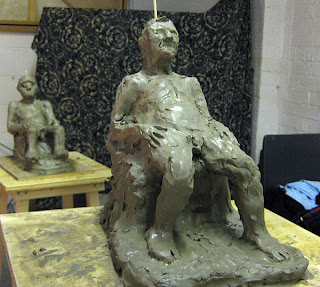 The clay base is ideally supposed to be deeper, for strength, but I decided half way through that my model's legs were too short, so had to excavate him some new feet out of the clay beneath! He does have a wooden, BBQ skewer sticking out of his head by the way, in case you were wondering, it's to add support while the clay is wet: you take it out when you are done.

If you are in Sheffield and fancy signing up for the next round of sessions, starting on July 19th, contact Andrew Spencer. KIAC is at The Lion Works, , S3 8D.

What an intriguing way to hone your observation skills.
It really does sound like a good way to do life drawing, in 3D. I am sure you become totally absorbed.

Given that my drawing is pretty ropey, adding another dimension boggles my mind!
But, my! you guys do have fun up there.

wow what an interesting class.