While my trusty new side-kick gets my admin up to date, I am still working away at the computer, cutting out the illustrations for my new book Baby Goes Baaaaa!, lifting the pastel drawings from the digital scans, ready for the coloured backgrounds to be dropped behind.

But I quickly realised that making final decisions on the exact colours of the backgrounds needed to take priority, as changing them later would mean revisiting the cutouts.

Sarah at Egmont suggested a colour scheme of around 7 colours, repeated throughout, to hold things together - a good idea. I tweaked her colour suggestions a bit and then narrowed them down to 6 I felt worked well across all the images.

Above are the 1st 4 spreads of the book, with all 6 colours in play.

I substituted the brighter blue above for the more lilac-blue Sarah originally suggested, and I wasn't keen on the peachy yellow below.
Sarah had kicked things off by created a low-res, digital mock-up of the whole book, a tricky task, like putting together a jigsaw. I agreed that most of it worked well, but made a few suggestions for changes. 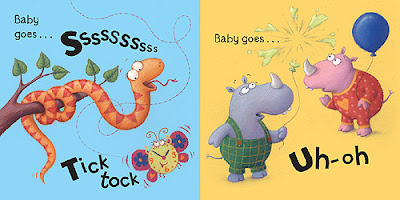 Having decided against the rhino's background yellow, I tried out all the other colours and ironically the best seemed to be the pale blue that was already in use for the adjacent snake. So I then had to try other snake backgrounds (whilst making sure I didn't use the colours on the previous spread either, or I'd get a knock on effect that would roll out of control!).
This was the best combination I could get (in the end almost a direct reversal of Sarah's 1st idea): 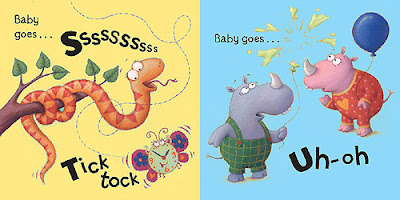 I felt the pinky lilac worked better for the ducks than Sarah's original blue (or my brighter substitution):

Which had a knock-on effect on the bunny / slug image, because of the flow of colours through the book. Instead of the pinky background Sarah had given it... 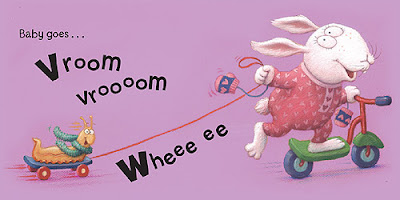 ...I introduced the bright blue: 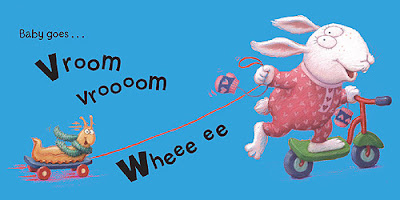 ...which Sarah rightly pointed out was a bit overpowering. She suggested the green instead, which works much better: 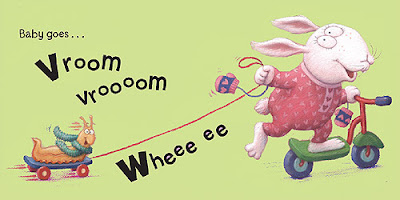 Which meant that we needed the stronger blue towards the end, so she suggested changing the quack / roar spread yet again, to this (I'll tweak the tiger's orangy 'roar' lines to fit the blue better): 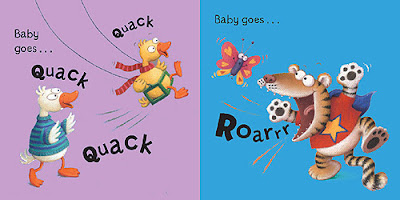 I think when things are working well, designing a picture book should be a collaborative process like this, with both illustrator and designer happy to bat ideas back and forth.

Sarah and I have worked together on several books across 3 different publishers over the years, so we are very in tune by now, which really helps (thanks Sarah!).

I cannot tell you how much I enjoy reading your blog! I've been reading it for nearly two years now. It's been so interesting to go through the 'Baby Goes Baaa' process with you. I can't wait to see it in the shops (I hope it gets published here in Australia). Also, I love to see your 'in situ' sketches which I quite often show my class of very impressed 11 year olds. Thank you so much for the time you spend sharing your work, it is really appreciated!

Dare I say this as it really doesn't matter what I think, and you can delete this comment but... I agree with all the changes - I like the lilac-blue change, the swap abouts and the less peachy yellow, but I am not sure about that stronger brighter blue colour! It doesn't seem to sit in quite the same palette as the others for me! It seems a bit too heavy.

It might be that the print will look different to the computer screen colour though.

Just my thoughts, and I am sure you and the designer are in the best position to judge.

That's a very good point June and I agree that it is slightly different to the other, softer colours. I confess, I always find the restrictions of certain CMYK colours tricky and was battling to get something that wasn't dingy within CMYK.

I'm hoping the added visual contrast might be a good thing as you read through the book and the strength of the blue won't be a problem, as long as I make sure the relevant illustrations have sufficient 'weight' to not be swamped by it.

Thanks for your honesty!

You know what June, I've done a quick experiment and I think it IS better if I knock the blue back slightly. I still prefer the cleaner colour, but fractionally lighter does indeed work better - thank you!

Lynne, if I have helped by seeing things with fresh eyes, that is good, but do use your own judgement.
I would hate to be seeing the colours differently to your view, and getting it all wrong!
Sometimes we are just too close to the work, and need to walk away and return to things after a rest to see it properly.

But I know your book will all look fantastic anyway.

Hi Lynne - Your blog is great. I really appreciate the insight you give into the whole process.

Very interesting, thanks for posting. Gosh, well done on sorting all the colours out. I find this sort of thing really hard to settle on a decision with. I go. 'red, no blue, no red, yellow? blue, no, red, arrgggh... :)

All Background Colours are awesome .

Specially the bright blue color looks more nice to me .