I tried out a new sketching event on Sunday, organised in cahoots with a lovely bloke called David Bocking from Pedal Ready - an organisation based in the Peak Park, who want to get us all cycling. The idea was to do a SketchCrawl out in the countryside, on bikes. 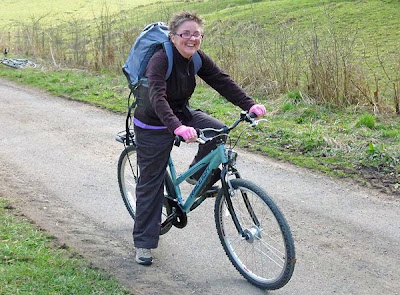 Now, I am a little bit pathetic when it comes to cycling. I never had a bike as a child and have the road sense of a prematurely flat hedgehog.
Which is why David gave me a Pedal Ready cycling lesson a couple of weeks ago, in my local park. He was brilliant and really helped my confidence (although at one point I did actually fall off, in an undignified pile of upended wheels and legs, right in front of all the dog-walkers!).
The Peak Park sponsored us on Sunday, by providing free bike hire, which was great, because it meant everyone could have a go. 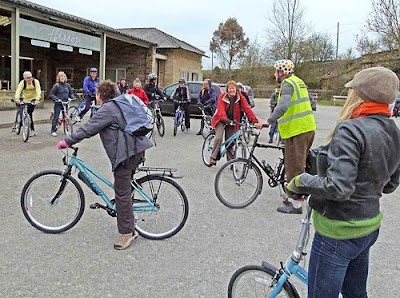 24 people turned up at 9.30am at Hassop's old railway station. I was impressed, given we'd all had an hour's less sleep, what with the clocks going forward. Two more, really sweet, Pedal Ready guys, Howard and Graeme, organised the loan of shiny (and brand new) bikes for anyone who needed them, and even did free bike-checks for everyone else. Then we set off along the Monsal Trail - a path following the route of the disused line (so mercifully flat!).
The 1st sketching stop was just 10 minutes away: Thornbridge Station: 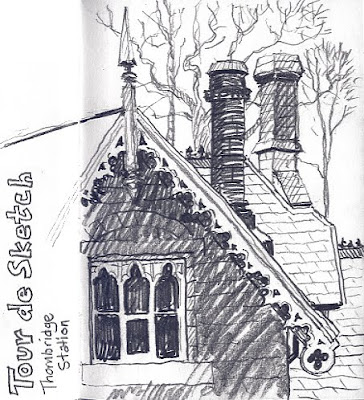 Apparently, in its day, it was a private station for the exclusive use of the residents of the adjacent Thornbridge Hall (!). We only had 30 minutes, so I just sketched a small detail in pencil.
Then we continued to a spot where the path opened to lovely, long views across rolling farmland: 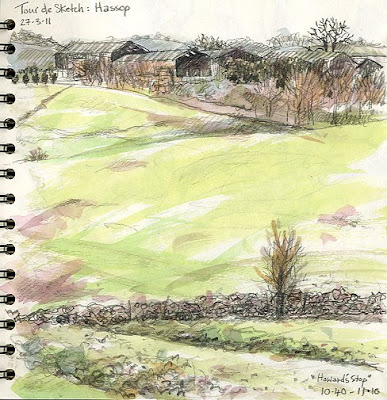 Again, we just had 30 minutes, so I intended to stick to my trusty 3B, but my sketch was looking pretty boring, so I quickly slapped a bit of colour on, which lifted it a bit. I have to say, it's still pretty dull, compared to some of the gorgeous paintings other folks managed at that stop. Hey-ho.
We had a longer run next, back in the direction we'd come, past Hassop again, to where there was a twisted, old birch tree in a picnic area. This one took 40 minutes: 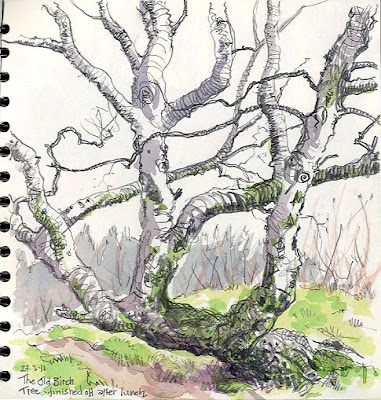 It was a bit chilly to picnic outside, so we had lunch in the elegant cafe back at Hassop Station, where they'd reserved one long table for us all to eat together, banqueting-style. I had celery and stilton soup, then date flapjacks (yum!) and was too busy scoffing to sketch.
The afternoon stint was another slightly longer run, out to where the trail ends, at Coombs Road viaduct. The sun was trying to come out and it was getting quite warm by the time we arrived, so we sat on the grass, beside a field full of springy, new lambs, and spent about 50 minutes on our final sketch of the day: 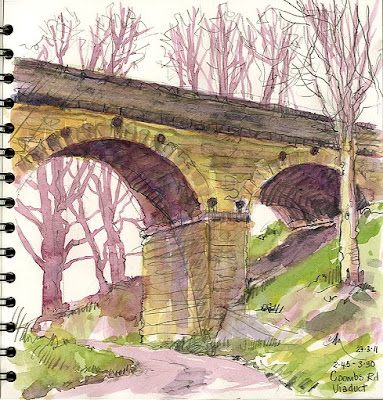 Then it was back to Hassop for a well-earned cuppa. We squeezed round our long table again and slowly passed all the sketchbooks around the circle. It was a real feast, as good as any banquet: big books, tiny books, such lively and varied work, rich with ink and watercolour, charcoal and pencil (as usual, I will post other people's work up in the Picture Gallery as they send it in. 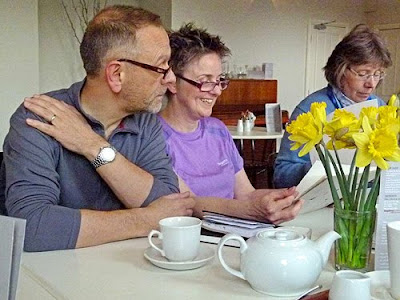 Everyone said they had a fabulous day, so I will definitely try and organise another, perhaps at the other end of the season. HUGE thanks to David, Graeme and Howard from Pedal Ready and to all the folks at Hassop Station, for their patience and help.
Thanks too to Angus, for these photos (more to come, he promises). Regular readers will recognise John (my long-suffering hubby) in the one above, who joined us for the day with a new sketchbook of his own. But mostly a big thank you to everyone who turned up to share the day and create such lovely drawings!

Thanks Lynne, my bike also enjoyed his first day out this year!

Hahaha Good on you Lynne. My hubby is an avid cyclist (mountain bike rider) and has tired to encourage me to ride more. First he gets me clipped into those frightening clip shoes and totally intimidates me but I go used to it. If he sees your post I will have no excuses not to ride. I think I will hide this one LOL

Ha ha - poor you Kayleen! I know exactly what you mean about that horrible toe clips x