I know, I still haven't told you how I got on doing my keynote lecture at the conference. Did they boo? Did they throw things? Did they turn up..?!

Well, I will tell all in a second, but first, a few other things like more celeb authors and illustrators I met... 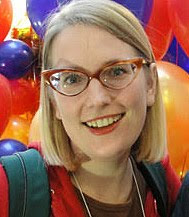 As well as the lovely Tim Hopgood, I also met Sarah McIntyre, whose illustrated characters are hilarious (and whose glasses I am SO planning to steal...).

Sarah took amazing, picture-book style notes throughout the conference. You can see more of them on her blog but here's just one of the sheets she did at Tim's talk: 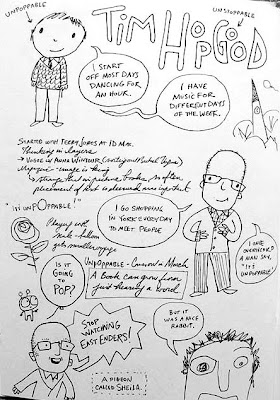 She also sketched her own take on my conference space chicken that was this years special logo:

In the conference bookshop, I discovered a new, favourite picture book, by Jason Chapman (sadly, no relation), called Stan and Mabel, which manages to combine beautiful, painterly backgrounds with great, cartoon animals characters. It also has the funniest endpapers I've seen in ages - go and have a look! 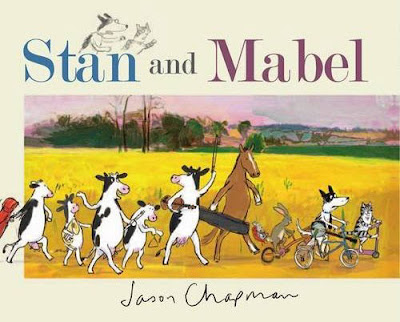 By the way: if you're looking for charity Christmas cards, Stan and Mabel star in their own range in aid of Battersea Dog's Home. 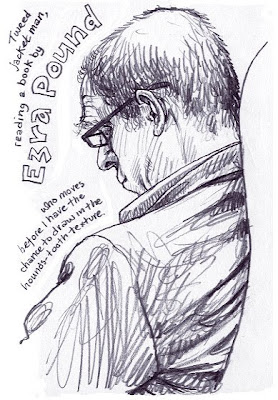 I met Jason in person at the celebration party on Saturday night, so was able to congratulate him. It was a rather classy affair, with a string quartet, free champers and colour-coordinated balloons everywhere. 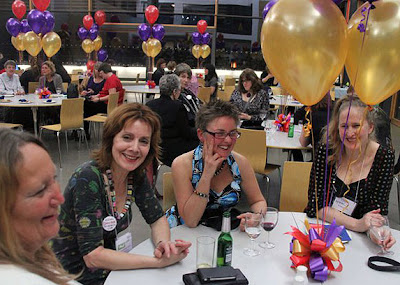 The SCBWI 10th anniversary celebration cake was just extraordinary: here is me posing with it for the camera (so, what's new!?). Can you spot the space chickens? 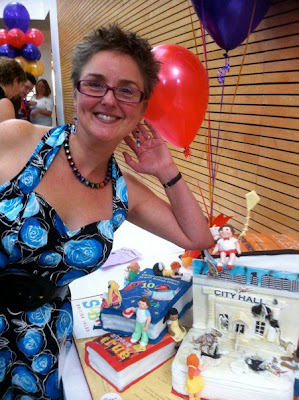 Below are my sketches of the panel up on the stage, as they debate the state of the industry (as well as a few of the people sitting around me). I was drawing when I should have been paying proper attention - slap wrists. No, I can listen and draw at the same time, honest guv, I'm a woman, I can multitask... 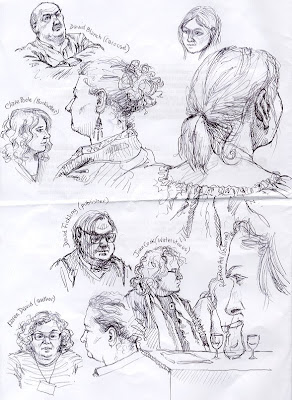 As well as the big events in the main auditorium, there were lots of smaller talks you could opt for over the weekend. I went to another really interesting session on Saturday afternoon, with Mini Grey. She talked us through how she wrote, designed and illustrated award-winning books like Traction Man and Dish and Spoon. 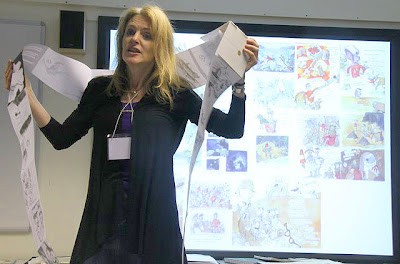 She does SO much work so achieve her books, reworking them again and again, creating coloured roughs and sometimes several mock-ups, often with hand-made flaps and pop-ups. She had brought along loads to show us: 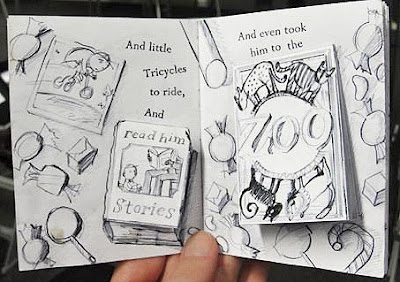 Mini also brought lots of pieces of her final, painted artwork and let us all rifle through it, which was so kind and totally enthralling. She told me, before her talk, that she was terrified, but it didn't show at all and she did a great job. 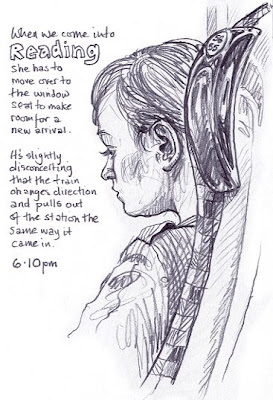 It was all so inspiring, and I was having so much fun, I completely forgot to feel anxious about my talks on Sunday. 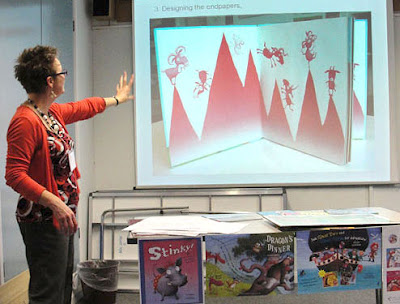 My first one was for 2 hours, but to a group of only about 15 people. I had intended to leave time for some drawing and discussion, but was astonished to discover, when I finally finished talking, that I had wittered on for the entire two hours! Here are Sarah's illustrated notes on my talk (great eh?): 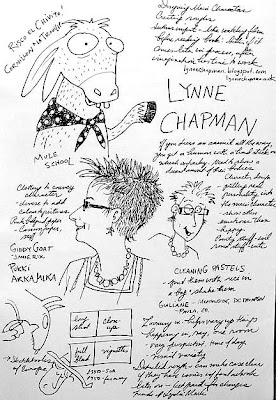 It was a great warm up for 'the biggy'. Everyone had been so nice all weekend, by the time my Keynote was due, I felt I was talking to friends, so wasn't nervous and just enjoyed myself.

I talked about how I came to be an illustrator and how I do my work, looking especially at Bears on the Stairs, as you can see from this photo. People laughed in all the right places and said very kind things afterwards, so I reckon I got away with it! 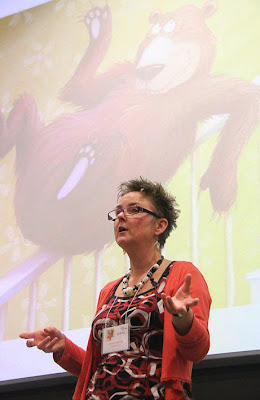 There were so many other interesting talks and events going on. I haven't even touched on the wonderful illustration exhibition, or the (frankly rather hunky) Marcus Sedgewick and his opening lecture, but I really must get down to some work. 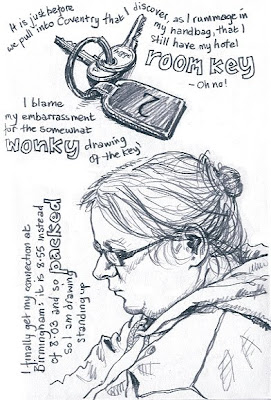 The sketches are some of those I did on the way there and back. If you want to see the rest (it was a long journey, so I managed quite a few) take a look in the Picture Gallery. 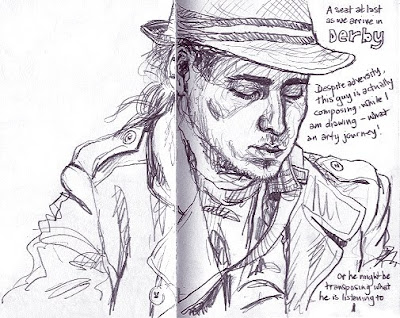 Thanks so much to all the members who work so hard to make SCBWI what it is, and especially to those who helped organise such a brilliant conference - can't wait until the next one!

It was a great conference and you were a great keynote! In fact, one of the best!

Hi Lynne, thank you for the big fat Stanley and Mabel mention and links on your lovely blog. It was really lovely to meet you at the Winchester party - I'm a BIG admirer of your work so it was a real thrill!
Our shared surname - someone at the party mentioned that a few people thought we were married but had had an argument because we weren't spending the evening hand in hand!
Only wish I'd been there for your talk - sounds inspiring.

LOL! That's brilliant, wish I'd known - we could have played it up...

Terrific drawings - you make it look so easy Lynne!

Sounds like a great conference, well done, and thanks for writing it up, it's great to hear all about it :)

Well post and this article tell us how attend your first lecture in the class and how to listen carefully thanks for sharing essay ghost writer .