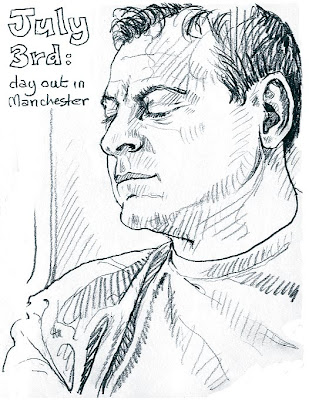 On Saturday, I took myself off to Manchester for the day, to meet up with some other illustrator friends and attend a lecture by children's book illustrator John Lawrence, part of the Manchester Literary Festival. 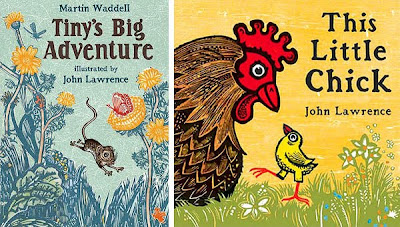 Many people may recognise John's illustrations from the spin-offs to Philip Pullman's His Dark Materials. To my shame, I didn't previously know his beautiful work. It was Cassia Thomas who suggested the outing, as John was one of her tutors on her Masters course. 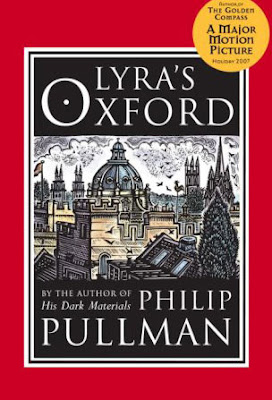 The space was a proper, banked lecture theatre, but Saturday was roaringly hot, and there was no air-con, so we got dreadfully stuffy up at the top. Fortunately, I had brought a fan with me and wafted myself throughout, like something from The Importance of Being Earnest!

The poor man was obviously very, very nervous, but it was a joy to be led on a journey through his wood and vinyl-cut illustrations. I had no idea that a modest, A4 size woodblock could cost £500! I think I'd find that stultifying, as I'd be terrified of making mistakes. 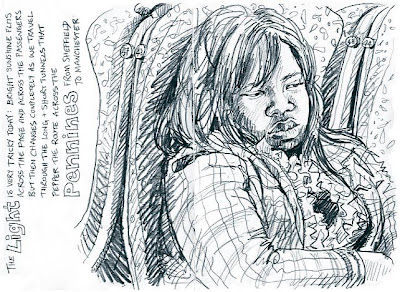 There was a lovely exhibition of children's book illustration alongside the lecture hall too, themed around subject matter. There were a lot of old favourites, plus some new discoveries. The only disappointment was that the illustrators themselves were not named! 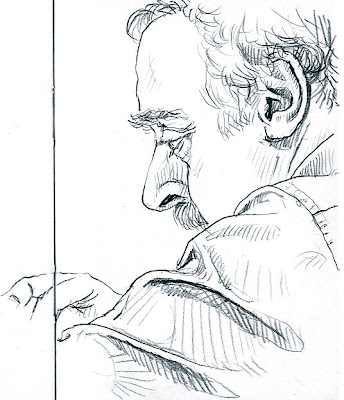 The other main activities of our day-out were eating, gassing, shopping and getting lost, by repeatedly walking in completely the wrong direction. 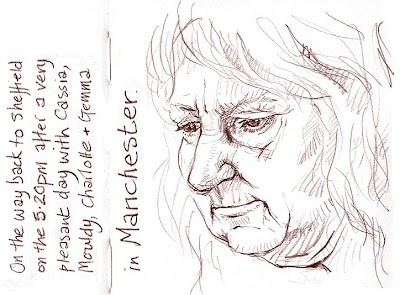 As usual, as you can see, I managed to bag a few train-drawings on my way there and back. I was very lucky on the return journey to have not only this elderly lady opposite me, but a monk sitting just down the aisle. 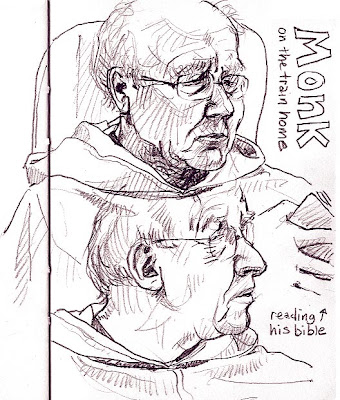 I'm annoyed with myself that I didn't get his white robes in and the rosary hanging from his belt!

I love your sketches of people on trains - you catch the individuality so well and they aren't prettified. The one of the monk is really monkish.

A monk ! On your train home ! That was a heaven-sent opportunity ( no pun intended ) I would have sketched myself into a frenzy.

Hi, I am the owner of the blog of photography http://photographymc.blogspot.com/

I have added in the favorite, I would like an exchange links with you.

Tell me what do you think.

oh oh oh!
Your blog, is rather splendid!
Thank-you for playing show and tell with all your pretty thoughts and pictures!

By the way, for some reason more recent comments seem to be taking a while to show here on the blog: I'm sure it's a glitch and they'll appear in time...

Oh - and there they are!