Tracing Up the Cover of Dragon's Dinner

Today I have been back in the studio, making a start on the remaining bits of artwork needed to finish off Dragon's Dinner. You may remember, I posted most of the artwork to the publisher nearly 2 weeks ago.

I thought I had only the cover left, but the Designer told me last week that we now have the money to have coloured endpapers - a rare treat - so that means I need to do some artwork for them too. The endpapers, for anyone who doesn't know, are the pages stuck down to the cover at either end, anchoring it to the inside pages. I had originally thought that I would do a sketch of the animals in the story being chased across the bottom of the pages by the dragon (into the book on the front endpaper, and then out of the book on the final one) which would be printed in line only, like above. We have decided that I will do much the same thing, but in the pastels, like the rest of the book. 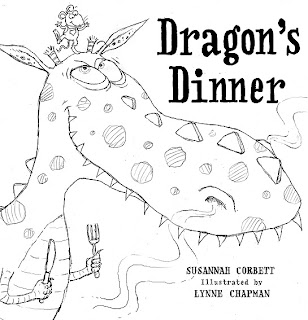 I'm doing the cover artwork first though, as there's a bit of a tight deadline, and that's the more important piece. It needs to be ready in time for the publisher to take a proof of the book to a big trade fair in Frankfurt in October, where publishers from around the world meet and try to negotiate foreign editions of their up-coming books.


This morning I printed out the line drawing of the cover image from my computer (a bit bigger than the final book size, so it's less fiddly to work on in the pastels). The picture here is just the front cover, it actually wraps around the back too, with his wings and tail. Next I cut my pastel paper to the right size, tacked the line drawing behind, and traced up the image on my light box. This is me tracing up an early spread from Dragon's Dinner. I have black-out blinds on all the windows, so when I'm not posing for a photo, it's actually quite dark! 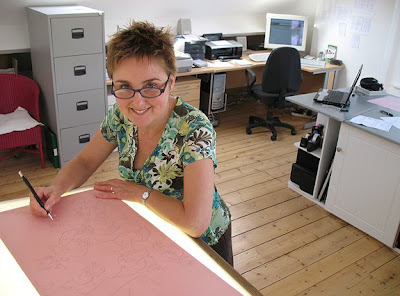 As you can see, I draw on pink paper. This is because the paper has to have a texture to hold on to the pastel properly, which means that you can usually see tiny spots of the paper colour through the chalk, even when it's finished. If you work onto white, this looks terrible, whereas pink is a handy mid-tone and adds a subtle warmth to all the drawings. It's a lovely texture too, that makes the printed illustrations look a bit different. If anyone is interested in having a go at pastels, the paper I use is Canson Tientes, available in most art supply shops, and it comes in loads of different colours.

When the line-drawing was done, I sprayed it with fixative. This is because I will quickly obscure the lines with chalk, as soon as I put the pastel background in (you always do the main background colours first). So what I then do, is carefully rub back the areas where there are to be animals etc, re-exposing my guidelines just enough to see what I am doing. But if I forget to fix the line before I start, that rubs out too!

I have tacked the prepared paper to my drawing board with masking tape in each corner, ready to start colouring with the pastels, and stuck the print-out of the line drawing alongside, as an additional guide. I have asked the publisher to return a couple of key pieces (ones showing similar images), which I will also tack to my board. This is to use as colour reference and to ensure continuity: the characters have to remain exactly the same throughout the book, or I'm in trouble!

But this previously finished artwork has to get back from being scanned first. The publishers usually send it off to the Far East somewhere (it's cheaper). Scanning turns my pastel drawings into digital images. All my original artwork is then returned to the publisher along with a DVD full of the digital versions. These are then ready for the Designer, who puts the illustrations together with the text, to create the layout of the final book.

The Designer told me this afternoon that the finished scans have just arrived on her desk, so my bits should be with me in the morning. While I am waiting, I think I'll trace up the endpapers too, so I'm all ready for lift-off when things arrive!

I had no idea that illustrating a book was so complicated! What a smashing idea using pink paper instead of white. Is this general with all illustrators, or something you found out for yourself?

To be honest, it's such a long time since I started using it, I can't really remember! I do remember trying a grey and it being a bit cold, and I flirted with a paler pink for a while, when the shop was out of my colour, but that wasn't as good. All in all then, I think it was trial and error.

Pastels is a relatively unusual medium, especially for picture books, by I would imagine other illustrators that use them would use similar paper, though not necessarily pink - that's just my particular preferance.

Do you know you have tempted me to have a go at pastels, I did try them years ago and got in a bit of a mess with them. I'll have a look and see if I've got a 'how to do it' book on the subject.

A couple of tips -

It's a messy business, not just your clothes (forearms and midriff especially) but also the fall-out of the dust around where you work, so choose your spot with care!

Also, work as large as you can. Most people that have problems are trying to use chalk like pencils, but it's not for fiddly stuff. Try building up a landscape first, where you can overlay and mix colours, and not have too much close detail.

Thank you for that info. Perhaps small is where I went wrong befor.

My drawings can be as big as A2. It depends on the detail of what you're attempting, but you should not really be working at less than A3.

I am finding your blogs so very interesting Lynne, I like Sandie had no idea how complicated it all was (ignorance is bliss)

Have you written any more books yourself? I know of one that you wrote.

Thank you for this wonderful insight into your world, would you like one into mine? Being a fat lazy old age pensioner is quite exciting lol.

I have written several other stories, but not yet had them published - it's very tough to get them taken up, so I've been concentrating on the illustration for some time now.

I am going to a writer's & illustrator's conference at the weekend (I'll be writing it up on the blog when I get back) and maybe that will inspire me to try again...