A Tree for the Trees!

It's been a bit of a nail-biting week...

Followers who live in Sheffield (and even some who don't) will know about the tree campaign that's raging here. We have been fighting the council for 5 years now, trying to prevent them from cutting down our street trees (many of them over 100 years old), simply to make it cheaper to maintain our roads and pavements. They have ravaged the city already and cut down 5,500 street trees, but campaigners have finally managed to bring it to a halt, for the moment. There have been injunctions, arrests and court cases, even though protesters have been peaceful, many of them pensioners, just standing under trees to hamper the felling.

All of this has meant a lot of legal costs for people who don't have that kind of money. So we are continually fundraising. Which is where I come in, with my tree paintings.

I have helped organise sketching events to get the message out there and, when I can, I go to street protests and stand under trees, often with my sketchbook, paints and my Inktense watercolour pencils. I have painted several beautiful trees, many of which we have saved from the chop (but which they still intend to come back for).

On Meersbrooke Park Road, there are a whole line of mature trees due to be chain-sawed out of existence. I put this watercolour of them up for auction last week, in aid of the tree campaign's legal fees. 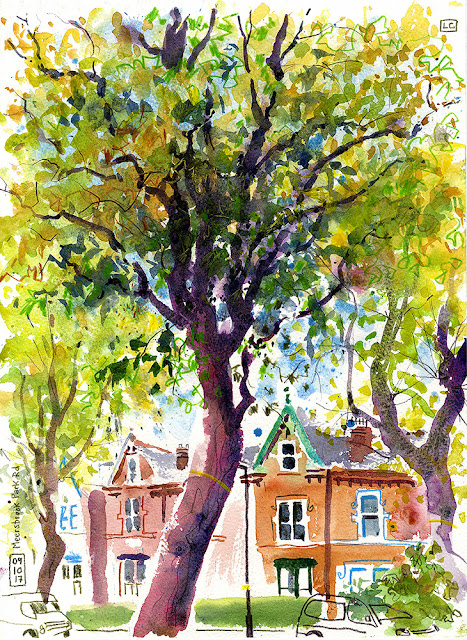 It started off very slowly and for ages it looked like we would only get £70, which was a bit of a disappointment to be honest. Despite spending ages posting it all over Facebook, things were deadly quiet for days. I grew despondent. Then suddenly, a couple of days before the deadline, two people got involved who bid against each other until we got to £200. Fantastic - that's more like it!

Thank you so much to F. J. for his generosity. It turns out that his mum and dad used to live on Meersbrook Park Road between 1965 and 1969. His dad was a minister at the local church and his mum taught in the local school. Guess who is getting a rather unusual wedding anniversary present on Saturday?

If you want to help us little-people to fight our fight, by contributing to the campaign, we are currently crowdfunding and any donations at all would be very welcome.

It is such a shame when humans ravage nature for convenience. What happens when all the trees are gone? We don't breathe anymore. Thank you for the work that you do to help with this effort.