The Day I Dropped my Sketchbook (and Other Things) into the Sea!


On Friday night, John and I got back from a lovely week away at Robin Hood's Bay, where we rented a house with a group of friends, celebrating John's big, scary birthday. It was great fun, but our friends all went home after a few days and we spent the last half of the week on our own. So, when the sun showed up, I wrapped up warm and went down onto the beach to do a bit of painting.

I especially get excited by the shadow shapes created on the cliffs along the East Coast, because of the extreme erosion. It makes for an interestingly ragged skyline too, where the top and edges sink and crumble. Despite a completely dry forecast, as I came to the end of my painting, it started to spit and a big cloud appeared, so we retreated back to civilisation for a warming pot of tea and a sandwich. 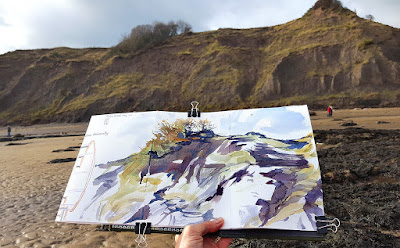 After lunch, things brightened up again, though I had to battle increasingly strong winds trying to snatch the sketchbook from my hand. The disaster struck when I was half way through a painting at the very end of one of my concertinas (I was trying to fill up the final book I did in China). While I was waiting for the paint to dry, I thought I'd start another sketch, so I carefully wedged the drying book between my rucksack and the boulder I was sitting on and got out a new sketchbook.

I had just made the first paint mark, when there was a particularly violent gust of wind. I just managed to keep hold of the book in my hand, but the wedged book wasn't so lucky. The leverage of the wind against the book toppled the rucksack forward. Both book and rucksack landed in the deep rock pool. 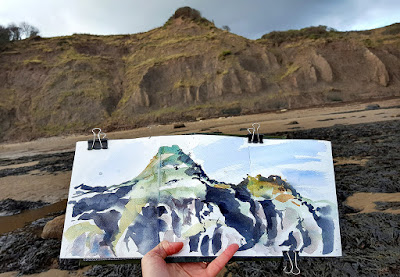 Panic. The trouble was, my hands were full and anything I put down would be flung down the beach in the crazy wind. I sacrificed the rucksack to the water and just managed to grab one end of the sketchbook as it went in, whisking it out really fast. I was left trying to juggle the crazy-flapping, dripping concertina, a loaded paintbrush and paint-filled pallet, as well as the other sketchbook. The wet sketchbook was trying to rip itself in half. Paint, sea and sand went everywhere. 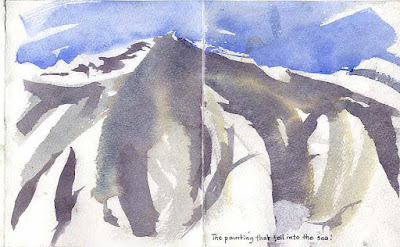 Luckily John was not far away and leapt to the rescue. He pulled out the rucksack and took the wet sketchbook off me. Miraculously, the bulk of the work was unharmed: amazing given it was all watercolour or watercolour pencil sketches. Some of the paint on the final sketch had still been wet when it was dunked though, so that image got partially washed away, as you can see above.

I was never able to finish it off because of what happened next... 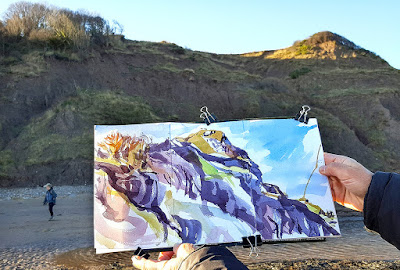 While John chivalrously stood with the length of unfolded, wet sketchbook flapping dry in the wind, I finished off the other painting I'd started. You can see the moment of drama recorded in the sharp ochre line which runs up into the sky on the far right in the final sketch above.

We were just breathing a sigh of relief. Things were more or less dry (apart from the rucksack, which I realised contained my phone: also a lucky escape). I'd finished off my painting and we had not quite frozen solid yet. Then I looked round. The sea had come in behind me. The very second I realised, it swirled around the boulder I was sitting on and covered my boots!

The panic, the scrambling with paint, sea and sand, trying to lift all our bits out of the advancing water with our hands already full of sketchbooks, was an almost exact replica of the first time, except there were two of us yelling this time. We avoided a repeat of the sketchbook dunking, but it was a close thing.

Back on terra-firma, I had to wash sand out of my palette and paint off my face. I was crunching sand between my teeth for the next hour (from putting the brush into my mouth that I'd previously poked into the sand. Duh). We retreated to the house to warm up and dried out the rucksack and it's contents with no harm done. Phew.

Um...this might not be the best introduction to plein air sketching...
But props to John and to you for making the most of it.
And very happy "Scary 0" to you, john.

:-D Thanks Dinah! I'll pass on your birthday wishes to the old man!

Wow, what a lucky escape for your sketchbook Lynne, (and you as well!). There's a certain pride in seeing the sand grains embedded into the paint surface later, remembering the struggle it's an organic process is sketching - a few sand grains and smeared washes add to the authenticity! :)

Ha ha - yes, it's true. I am trying to keep the sand in there. Like a badge of honour!

That IS an adventure! The sea is fickle indeed...I've fought those shore winds myself, and once an errant wave advanced farther than any before it to soak my bag and camera...I empathize!

What an adventure! Glad to know you both were fine and sketchbooks saved!