Telling the Stories behind Everyday Objects

I bet you are surrounded at home by objects which have stories attached to them. Sometimes the objects in our life are mementos of important occasions or turning points, but mostly they are the custodians of more simple memories or just items we use for all manner of everyday uses. They still have stories though: where you got them, whether they are good or bad at their job, whether they fit neatly into your life or hang around, without a real home. 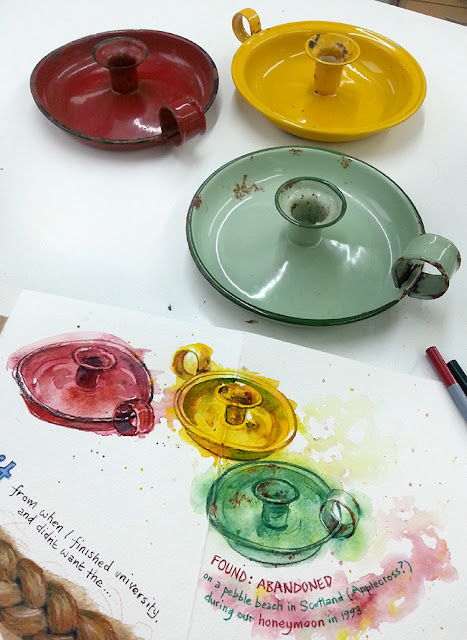 Last Wednesday, I ran a day of workshops, exploring our relationships with objects and looking at ways to bring out their stories and record them through sketching. I was working with the researchers at The Morgan Centre again, but also in cahoots with the Manchester Museum at the University of Manchester. We were focusing our attention particularly on objects which resonated with two different kinds of stories... 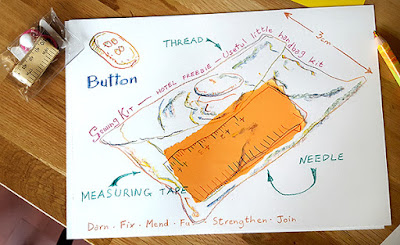 The morning workshop was about being thrifty. The researcher Helen Holmes brought in various examples of objects which demonstrated ways in which she was thrifty. The museum also found items in their collection, like lots of beautiful, re-purposed tins and packets from the fifties and sixties, used to store various seeds and slides from their plant collection. One historical object I particularly liked was a massive wooden mallet from ancient Egypt, used for reworking stone statues, presumably when one pharaoh was replaced by another! 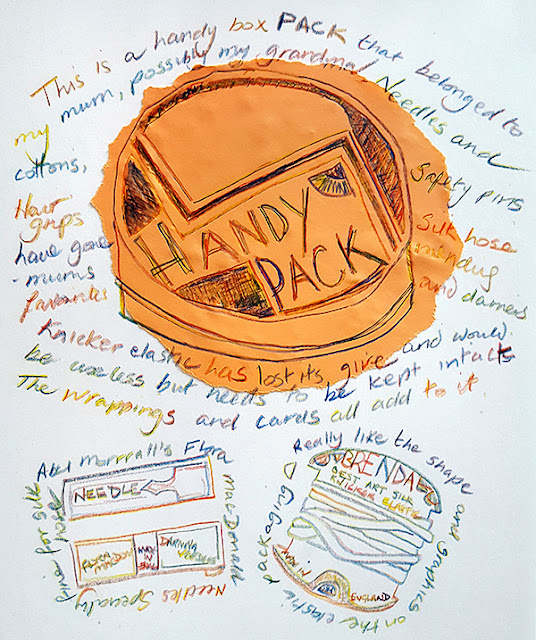 Participants brought in their own objects from home, so they knew their significance. This object below was absolutely perfect for the theme of thrift: it's a device for making use of all the oddments of soap, crushing them together to make a fresh bar. 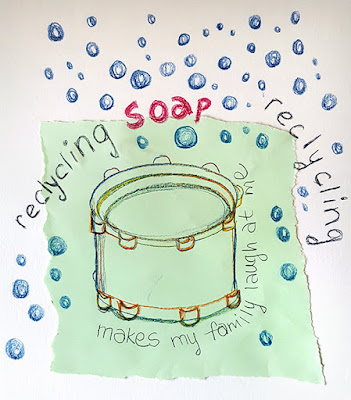 In the afternoon, we looked at objects which give us a sense of belonging. The researcher Vanessa May talked about how personal this was to her, because she was half Finnish and took a long while to feel that she truly belonged in the UK. One of the objects she bought along was a train ticket. She explained how she had  for a long time found it so complicated, working out how to buy the right ticket in England, that the act of cracking it told her she now belonged.

I took along my Urban Sketchers badges from the various symposium's I have attended, because the fraternity of sketchers is like a big international family. 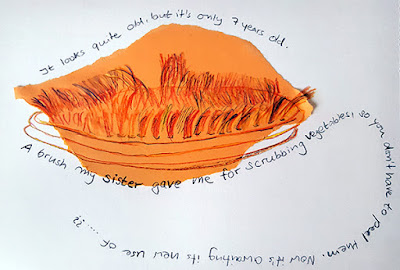 My job was to teach people how to sketch all this and to explain how the act of sketching is about really looking and how that focus builds a relationship with your subject.

Some of the participants already had sketching experience, but many did not. To get people relaxed and ready to explore their objects, I showed them techniques for creating confident drawing lines and introduced them to the Magic, multicolour pencil. Then I showed them how to use torn collage to create impact behind a line drawing. 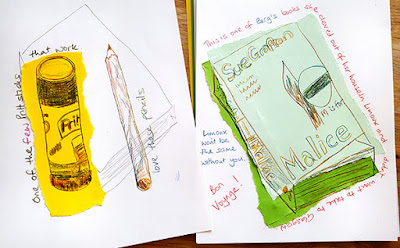 We then talked a bit about some of the stories that tied people to their objects and how to condense that story down to a sentence or two, which you can then add to your sketch. I used some of my residency sketchbooks to show people different styles you can employ when drawing your wording and various ways you can use the text to make interesting things happen with your composition, to 'design' your page. 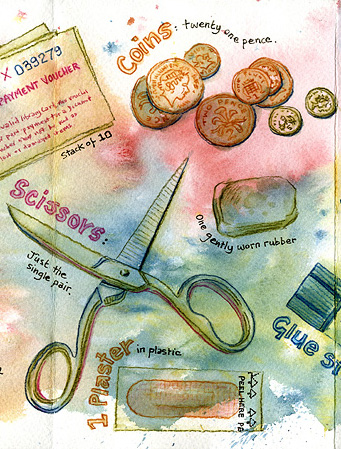 Many of the objects had really lovely stories. What was particularly interesting was that several people found that the act of drawing their object focused their mind differently. Particularly when we were talking about the sense of belonging, doing the sketch gave them time to think further and sometimes changed the way they felt about the object.

Thank you for your book, Sketching People. I read it from cover to cover, taking notes along the way! (I wrote about that in my 2nd to last blog post.) Of course I love your sketches and those of the other artists, but I also love the text. I actually felt a difference in how relaxed I was sketching after I read the book. I've been talking about it in my sketch group...

Wow - that's great to hear! I am delighted that you found it so useful. I have had lovely feedback from people, which makes all the hard work worthwhile. Thanks you so much for sharing it with your sketch group and blog readers!

I'll be reading it soon! I'd love to hear more about the Magic pencil.