Remember when I was in Beijing, I had a quickie calligraphy lesson in a school? Well, I have a Facebook friend, a fellow sketcher living in Hong Kong called Alvin Wong, and he sent me a present to help me practise (Alvin was the person who helped me to hook up with Urban Sketchers Beijing). 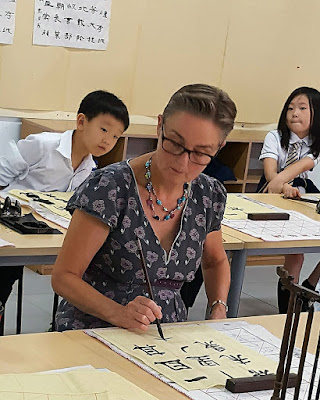 I bought some calligraphy brushes home with me and some Chinese ink and asked Alvin to recommend a paper that would be suitable, as the stuff I used in the school was almost as fine as tissue paper. That was why Alvin sent me some Magic Cloth. You go through an awful lot of ink and paper if you practise the regular way, so Alvin says that Chinese people use Magic Cloth instead. It's not really cloth, but it's not paper either, it's sort of vaguely plasticky. But the most interesting thing is that when you paint on it, using just regular water, it looks exactly like ink! 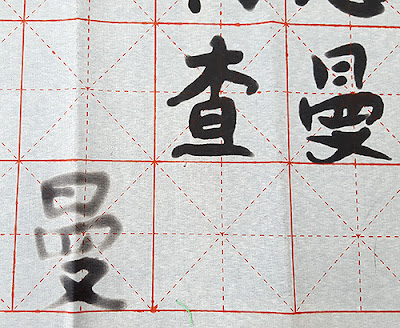 I saw a YouTube film and couldn't work out what I was seeing. It looks just like painting with ink, but the brush has no ink on it. Now I have Alvin's present, I can see that the sheet is backed with black and the water turns the top layer transparent. Clever stuff. As it gradually dries off, the sheet turns white again, so you can use it over and over. 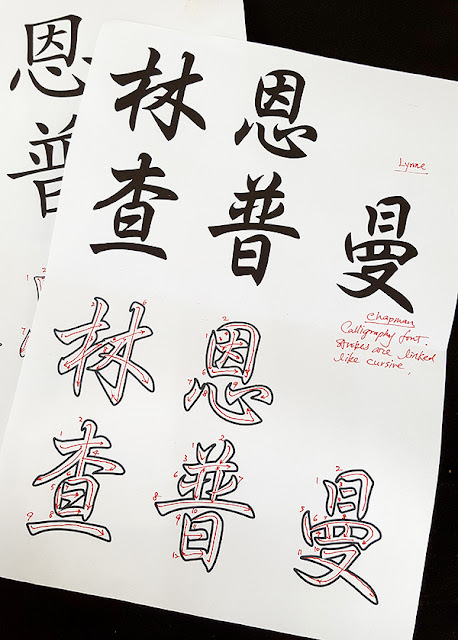 Alvin gave me another present too - he wrote my name for me as Chinese characters, so I have something to practise. Of course, I am putting my trust in him: it could say anything!

I have two sheets of the Magic Cloth: one has just a grid for guidance, the other has actual characters printed on it, for you to follow. 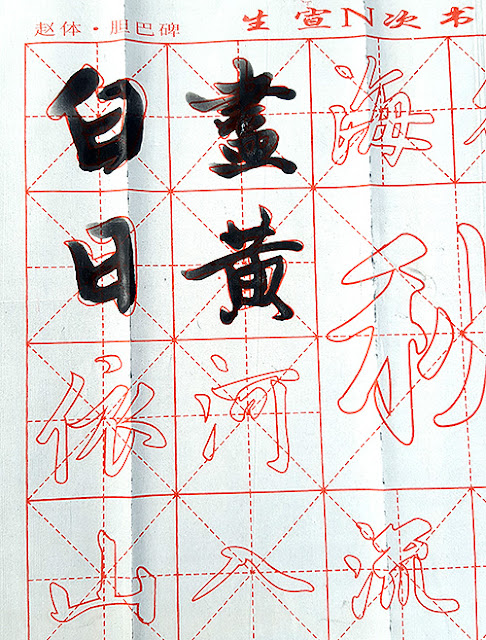 I have been having fun. I am pretty rubbish though. I am ok at getting the right kind of marks, roughly speaking, because the wrist actions are similar to the way I draw in paint, but it's really tricky getting just the right amount of water on your brush. If you have even slightly too much, it bleeds and gets really ugly. This emulates the way in which the very fine calligraphy paper reacts to ink. 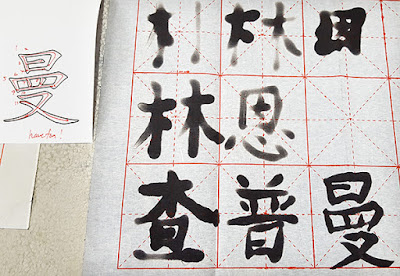 It is very relaxing to do though. Definitely a good stress-buster. Thank you so much Alvin, for such a lovely thought and a really fun gift!

Hey, Lynn, I used exactly the same stuff when I was testing Chinese calligraphy brushes at Jinli Street in Chengdu last month. I couldn't work out how a brush wet with only water could display like ink. Thanks for "un"confusing me. :-)

Ha ha - it looks so convincing, doesn't it? A very neat idea.