'But, how does it work?' asked a friend before we left. 'You don't speak Chinese...' 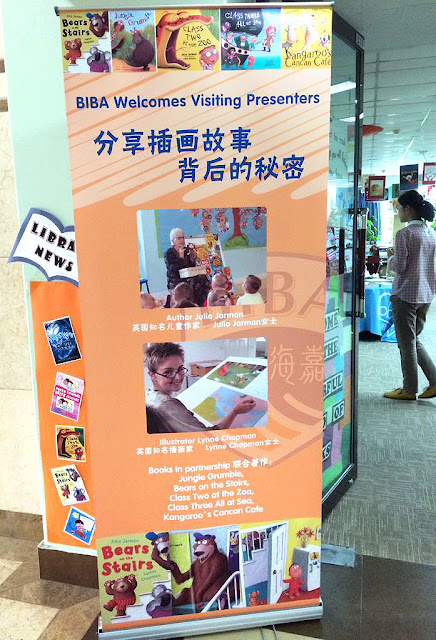 Well, the six schools which Julia and I visited in Beijing were all what's known as International Schools: fee-paying, independent schools, not state schools. They all run to a UK or US system and teach largely in English, so we didn't have to learn Mandarin. 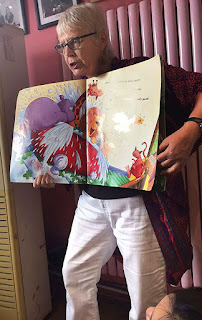 But though a proportion of the children we worked with were the English-speaking offspring of international workers in China, a good proportion were the kids of the new, wealthy Chinese. This meant that, when we were doing storytelling work with the younger ones, we had to bear in mind that not all the children spoke English. It seemed to be fine though. Picture books have pictures! Of course, I also had the advantage of being able to draw for them - the international language. But Julia's readings are very lively and dramatic, as anybody who has seen her read Big Red Bath will testify. Everyone at the schools seemed very happy with us anyway. Phew.

Each morning, we went into school together but, with one exception, we worked independently. We met up to compare notes at lunch and for signing books at the end of the day: a local bookseller had ordered our books in and they sold loads. We sold out in two schools and, in another, we were signing for such a long time that the lights suddenly shut off and we were all plunged into darkness - apparently it was automatic at 5.30!

5.30 might not seem that late to be putting lights out, but the Chinese start early. We were generally picked up from our hotel at 7.15 (groan). No late nights on the town for us! 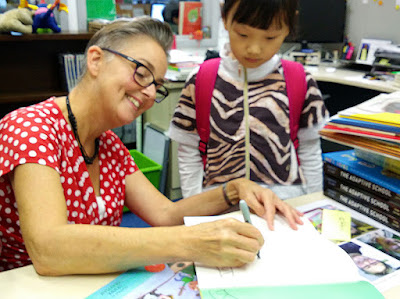 With everything shunted forwards, Julia and I also had problems getting used to the eating times: in Keystone Academy, where we boarded in student rooms and ate in a dining room, we had to be there for an 11.30 lunch and a 5.30 dinner. All big, cooked meals too. 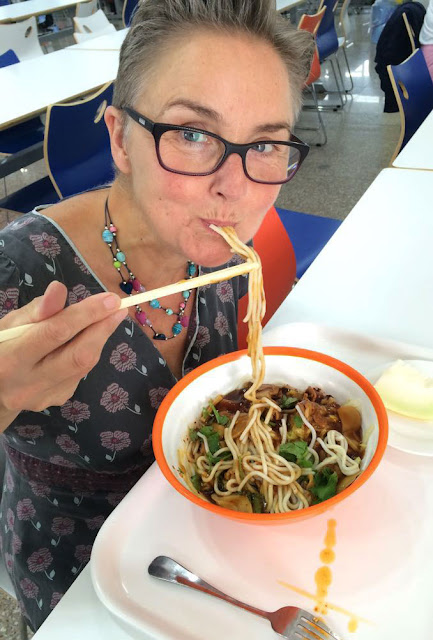 In other schools, we were usually taken out to dinner by the lovely librarians. It was all gorgeous food and it would have been rude to say no... We both got home feeling rather porky!

What an experience! No time for tourism?

Absolutely fascinating ! Thanks for the insight into your days

Thanks guys. We didn't have a lot of time for tourism, but we did make good use of our weekends. More posts to come with our various adventures! You'll be sick of hearing about it by the time I'm done :-D