I am so pleased that Professor Sue Heath worked her magic and talked the university into funding a film of my artist-in-residence project. Even though the residency is now all finished (so sad...), it is lovely, and very useful, to have such an excellent record of what it was all about.

We commissioned an independent film maker called Howard Warmsley. It wasn't until he started talking to Sue and I about what we wanted from the film, that I realised how complicated a job we had given him.

There were so many threads to tie in. To start with, he had get across my perspective on the project: what I was trying to achieve with the concertina sketchbooks, what I learnt etc, plus showing me in action of course. Then there was the academic angle on the work, both during the project and looking to the future. We had to explain why Sue commissioned me in the first place and make sense of some of the sociological research projects I had shadowed. On its own, all that would still have been straight forward enough, but then Howard also had to include the fact that I was teaching the academics to draw, how that worked and what they got out of it, both on a personal and professional level.

As if that wasn't enough to worry about, poor Howard also had an additional challenge. Because it took a while to put together the bid for the money to pay for the film, and then a while longer to get it all rubber-stamped, by the time we were ready to begin, the students had almost all finished and most of the academics I'd been working with had disappeared! We had to shoot everything we needed really quickly before the place was entirely deserted and I was left with nothing to draw.

Howard hired an old warehouse for a day, to film the main interviews. The space was acting as an art gallery, so we had a white wall to tack up the sketchbooks and room to lay down a track, so Howard could pan smoothly across them. I did the sketch at the top while they were recording a section of Sue's interview. It started to rain so heavily at one point that we had to stop because the pounding of the water on the roof was so noisy!

One last-minute challenge for Howard was that Sophie Woodward, who I had worked with so closely on the Dormant Things project and who was heavily pregnant at this stage, didn't turn up at the warehouse. We got a text message from her partner: Sophie had been whisked into hospital and she'd had her baby! We decided that was a pretty good excuse and Sue did her best to cover for her. 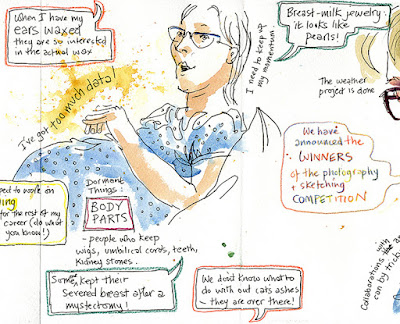 We then had to wait for Howard to edit it all together - the trickiest bit, both for him and for me! Sue and I got to see a rough-cut a couple of weeks later, then another slightly less rough edit a couple of weeks after that. It was a race to get it done in time for the big end-of-project exhibition. We didn't see the final thing until the day we actually put the exhibition up. Howard arrived mid afternoon, with the magic on a DVD. I was so excited to see it, I was nearly bursting.

The version above is a slightly different edit of the film to the one which we played at the Unfolding Stories exhibition in July. Howard cut me a second version, specifically for my new website, with a very slightly stronger emphasis on my story and with more footage of me creating the actual paintings.

I think he did an absolutely brilliant job. All the strands weave together in a really clear way. Somehow he managed to distill hours of interview footage down to just 15 minutes, while still getting across all of the most important things that we said.

Anyway, take a look. I've already had some amazing feedback, which is fantastic. I'm so pleased it all comes across so well. Thank you Howard!