Sorry I have not been blogging much lately about my work on Class One Farmyard Fun. It's ironic that, in periods when I have loads going on to tell you about, I have almost no time left to actually tell you.

Anyway, I have been working on a batch of spreads towards the end of the book, when the children try to catch the escaped bull. The bull has been running amok, biffing children here there and everywhere, but has managed to knock himself out. This illustration follows on from a near-miss with the lad in the red trousers:
Now the bull went after Paul
But - phew! - he missed and bashed a wall.

Julia Jarman's text for this actual page is:
Meanwhile Miss and a duck had landed in the farmer's truck (they were previously biffed)
Miss hissed, 'Children hide in here! The bull is waking up I fear.'
She was right - his eye-lids flickered, enraged by a pair of bright red knickers.

I don't generally do artwork for the spreads in order, but I tackled this sequence of illustrations one after the other, as they have a lot of the same items in: the bull, the truck, the washing etc. I needed to use each illustration as colour reference for the next, so kept them on the drawing board as I finished them. It's very handy having a nice big board: 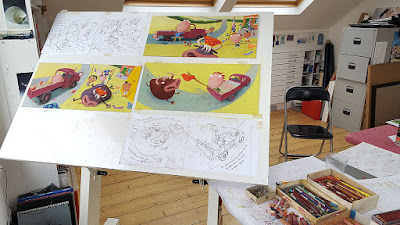 The text for the next page is:
Then suddenly Sam had a plan:
'Miss, quick, drive as fast as you can,
Past that washing and down the track.
With luck we'll get that bad bull back
In the field from where he came
and lock him safely up again.'

I had problems at the rough stage with this sequence of spreads and it was this that Julia and I were discussing when we met up at the Northern Children's Book Festival. In her original text, the bull sees the red knickers hanging on the washing line. But I was having trouble making that work when I got the idea to tangle the knickers onto the bull's horns. Unfortunately, that created a knock-on problem, because Sam next needs to grab the knickers to wave at the bull. Taking the knickers from the bulls horns was obviously too dangerous and scary for him. So I got the idea of him using the prop from the washing line to hook them off without getting too near. Julia agreed with my ideas and changed her text to fit. She is absolutely lovely to work with - she is always open to ideas and never 'precious' about her text. This is her altered text, which goes with the spread below:

But could they do it?
Sam got the prop... and took the pants off that bull in a strop.
Waving them, he yelled, 'Ole! Catch us if you can! Okay?'
The bull charged on, enraged by red
As Miss drove the truck, straight ahead...

I am now working on a spread from earlier on, where several of the children have been tossed into a smelly heap of manure, and the bull is creeping up on Miss... Watch this space!

Oh, my! This is a true cliffhanger! :D

Love these illustrations!
Do you colour by hand on on the computer? I have just started your Craftsy course. :)
Clare.