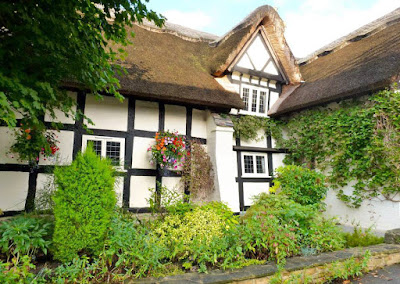 Last weekend I was away from home for 4 days in the historic village of Evesham, near Worcester, doing another of my dream jobs. It involved enormous amounts of eating (best rhubarb crumble I ever tasted), sketching in the sunshine, listening to stories, chatting into the night over glasses of wine... oh, and also delivering workshops and portfolio advice for members of the Society of Children's Book Writers and Illustrators.

I knew the SCBWI retreat was to be held in a lovely old house with pretty grounds, but I was completely gob-smacked when my taxi stopped outside a long, Tudor house, all timbers and thatch. I was shown up a big, wooden staircase into a lovely old room, whose floorboards sloped down into one corner. I unpacked with a smile.

We kicked off about an hour later, with a brilliant getting-to-know-you exercise run by fellow author/illustrators, Loretta Schauer and Alexis Deacon. We paired up and had to draw or describe events from each other's past, stimulated by silly questions like: When have you injured yourself as a result of your own stupidity?

Then I ran my first session of the weekend: teaching people how to make concertina sketchbooks. 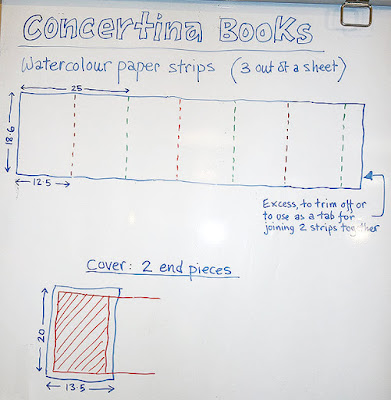 SCBWI had provided a big pile of watercolour paper. We set to, cutting and sticking. We cut up old cardboard boxes for the covers - it worked a treat. Then we all filed into the dining room for the first feast of many. 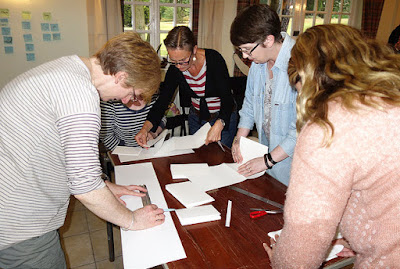 Next morning was a workshop by Alexis. He taught us techniques for making narratives more interesting, looking at the potential for using dishonest characters with hidden motivations. We all tried to create a story, though mine ran out of steam half way through. After coffee and biccies, we had a bit of free time, so I took my newly-minted sketchbook into the grounds: 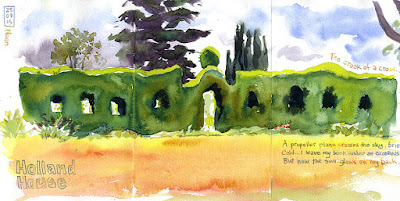 Then it was lunch (yum), followed by an interesting talk by Andrea MacDonald, Senior Editor at Random House, about what makes a good picture book: 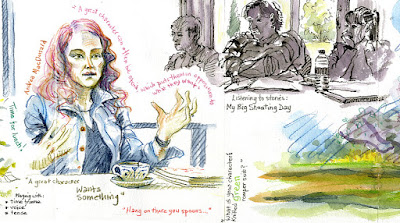 I did a couple of one-to-one advice sessions next. I found a lovely little summer house tucked away at the foot of the garden, which was perfect for a cost chat. people had booked appointments with me and I did my best to be wise and helpful with first an illustrator, then an author: 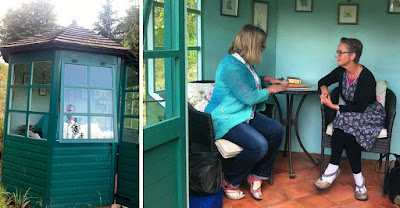 My 2nd workshop used the sketchbooks we made earlier. I wanted to explore the idea of finding a narrative in a place, of capturing the essence of a particular period of time using words and pictures, but doing it through close observation, recording what we could see, hear and smell. This is of course something which I am very used to doing in my sketchbooks, and I thought it might make a good source of inspiration.

I sat under a big tree and rang a bell. People gathered from around the grounds. Some had been playing croquet on the lawn! 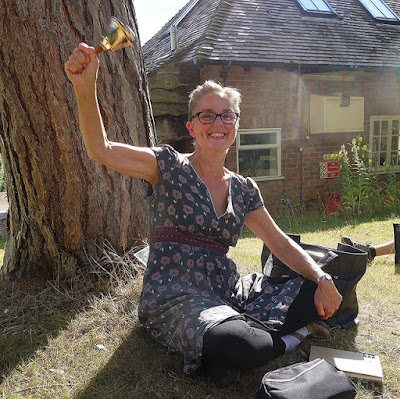 We had expected mostly illustrators to take up the challenge, but a few authors went for it too. I showed the work I'd done since I arrived, as an example, and talked through easy techniques for getting instant results with watercolour (it was a revelation to most people that you could paint with clear water first, to control the colour), then everyone dispersed for an hour or so of experimentation. 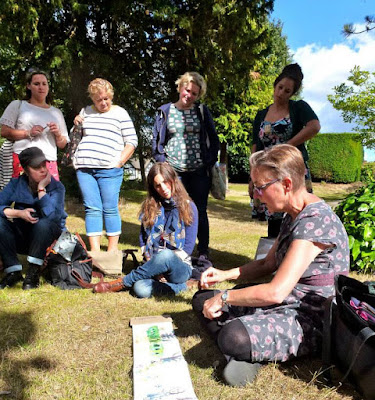 After dinner (yum), we gathered in the conference room and, in small groups, talked though our work-in-progress. Each group then chose the strongest 3 pieces of work for each person - a great idea, as your own favourite bits of work are not necessarily your best and a fresh perspective is very useful. All the work was then displayed for everyone to browse and the next thing I knew, it was midnight! 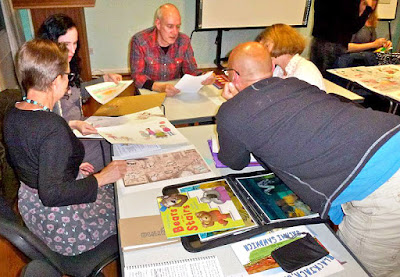 Sunday began with my main workshop (after breakfast of course - yum). I devised a technique for drawing a journey, one piece at a time, to build up the elements of a story. Only, to put a fly in the ointment and get people out of their comfort-zone, many of the components were chosen randomly, by a neighbour. For me, the challenge was making it work, when about a third of the delegates were not illustrators. Still, it seemed to go extremely well. After coffee (and biccies) people took it in turns to pin up their drawing and tell their story. 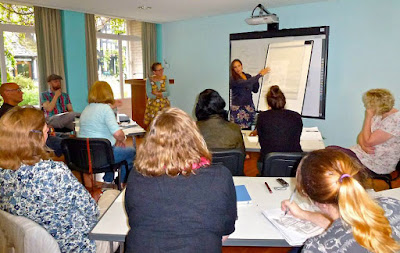 Some ideas were hilarious, some were quite dark, some narratives were in a bit of a tangle, which the group helped to sort out: the brainstorming of 30 creative minds, all focussed on progressing one story idea was fantastic to watch. 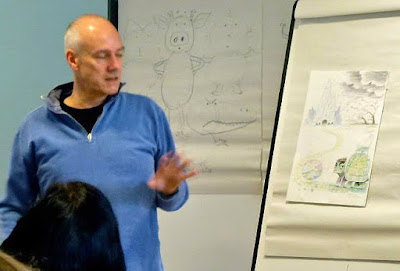 The 'house cat' decided he wanted to join in. He demanded to be let in from the rain through the French windows, jumped up on the tables, walked across people's work, then took at seat near the front to listen: 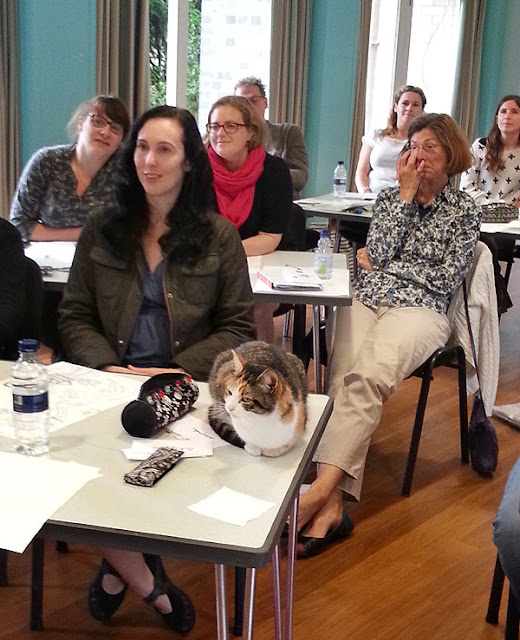 After this of course, it was time for lunch (yum). Then we had another talk, this time by Emily Lamm, once my editor at Gullane (who worked with me on Swap!), now working as Commissioning Editor at Hachette. She gave some excellent advice on what editors are looking for and things to try / avoid in your writing. I tried to capture her and highlights from what she was saying in the concertina sketchbook: 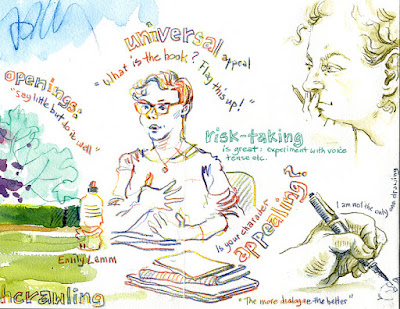 I had two more mentoring sessions during the afternoon, sadly in the house this time, as rain was still bouncing around outside. Then Alexis did a demo session, showing how he draws with ink, using different kinds of brushes (in various stages of decay):

I had my final one-to-one session, then at 7pm the gong sounded and it was time for another glorious dinner. I was impressed with the fact that the veggie choice for every meal was just as adventurous and delicious as its meat counterpart. We were all so impressed as a group that we asked for the chef and kitchen staff to come out and gave them a huge round of applause.

After dinner, we took a group photo in the garden: 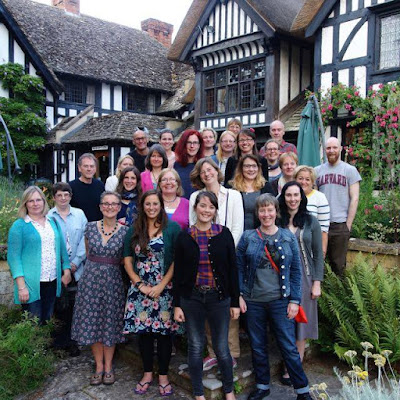 Then we were all given a postcard, onto which we had to write three achievable goals for the next 3 months. The illustrators decorated the front of their cards. We stuck stamps on and handed them back to Loretta, whose job it was to post them all back to us in three months time. Good idea, or what?

We stayed up chatting and drinking and taking photos of each other until late, a gradually dwindling group. Finally, at 1am, the last dregs gave up the ghost and headed for bed.

Next morning, I packed my suitcase then luxuriated over my final breakfast (yum): 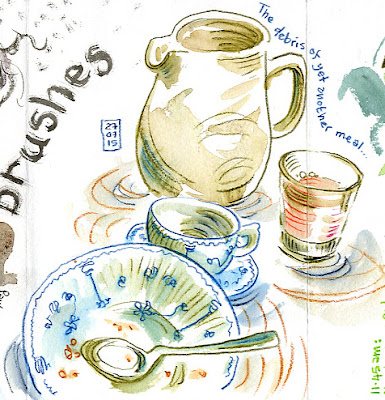 Then gradually, a few at a time, people had to leave (cue hugging...). It had been such a rich weekend, we all felt rather sad to be on our way. I was so sad that I had to buy myself a present from the gift shop (a VERY funky necklace). 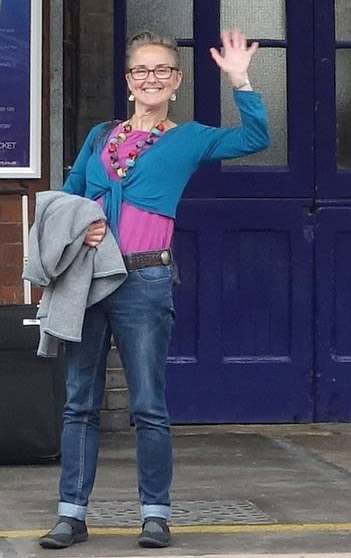 Thank you to Loretta and all the team at SCBWI for inviting me to take part. It was a joy. Thanks as well to Sue Eves and Paul Morton, for the photos.

It was lovely to meet everyone, including the rather amazing Alexis Deacon, who's head is just stuffed with crazy story-stuff. And you know the really good news? I get to do it all again next year, as it's a 2-year invitation!

What a fab event - and an amazing venue. I've sent this to a FB friend who was a children's illustrator in the US as I know she'll love it!

Sums it up pretty well Lynne. A wonderful 4 days.

It sounds so special. I was sorry to miss it. Barring any more surprise family weddings, I will be there.

It sounds so special. I was sorry to miss it. Barring any more surprise family weddings, I will be there.

Wonderful write up of what was a fantastic 4 days.

Sounds so inspiring! Thanks for writing this up.

This sounds so much fun. I am sure that you were great inspiration to everyone there.

Brilliant, Lynn. It sounds simply amazing. Wish I could have been there. (Yum.)

Smiling all the way through reading this, what a yummy weekend!

Over and over I marvel at the blessings of my life: Each year has grown better than the last. See the link below for more info.

You all seem to have so much fun and all these sketches are also looking great. I am also thinking to plan a similar event but cannot find suitable NY venues for that. Do you have any suggestion for me?

Sorry, I am UK based, so have no idea.

Your working and giving notes too good thanks for share it english grammar prepositions rules .