I discovered the monumental and slightly rusty underbelly of Castlefield a couple of months back, when I was invited a to run a SketchCrawl for SCBWI. On that day, we were supposed to be drawing inside MOSI, so I got less than an hour to explore outdoors with my sketchbook, but I was determined to go back and spend a bit more time, so chose it as the location for this month's SketchCrawl North meeting. 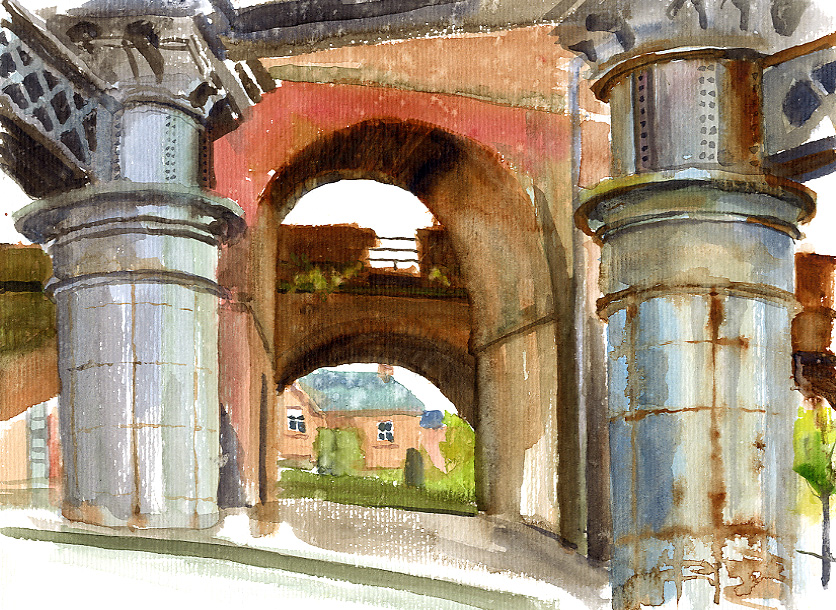 What I didn't know, was that the weather forecast was going to be heavy rain on and off all day, with the possibility of thunder and lightning at lunchtime. Great.

Come Saturday, four of us left behind the irritatingly blue skies and glorious sunshine of Sheffield and took the train to Manchester. It was already raining when we met up with a dozen others outside Deansgate station. 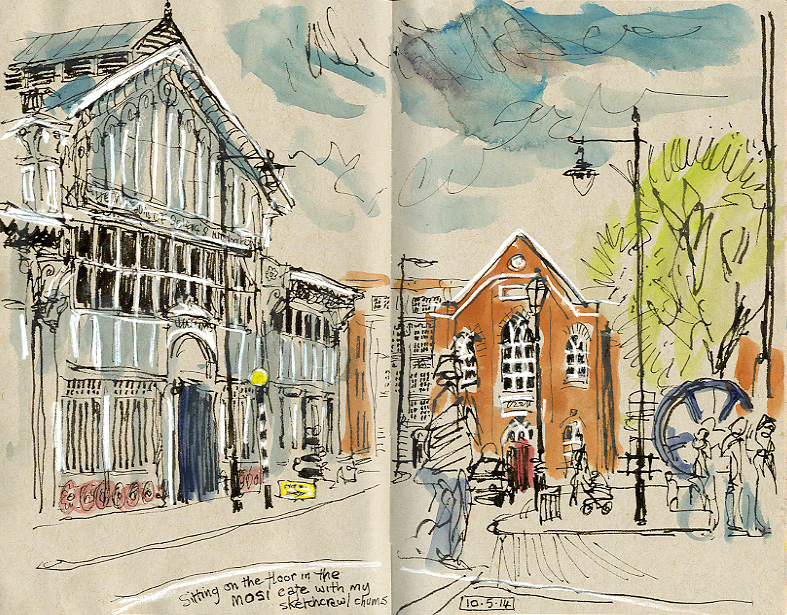 Most of the group decided to opt for the warmth of MOSI, but a few of us tough-nuts braved it, sheltering under the railway arches. I love the strong contrasts you get, even in bleak, grey conditions. I managed the painting at the top, but the rain was getting heavier. It was splashing in under the arch so I had to keep moving further and further back. I just about got finished by the time we decided to give it up and get a coffee to warm up.

We headed for MOSI, where we discovered lots of our team in the cafe, luxuriating in soft sofas and painting the view out of the huge, picture windows. There was no soft space left, so I sat on the floor again (my poor bottom) and did the sketch above. 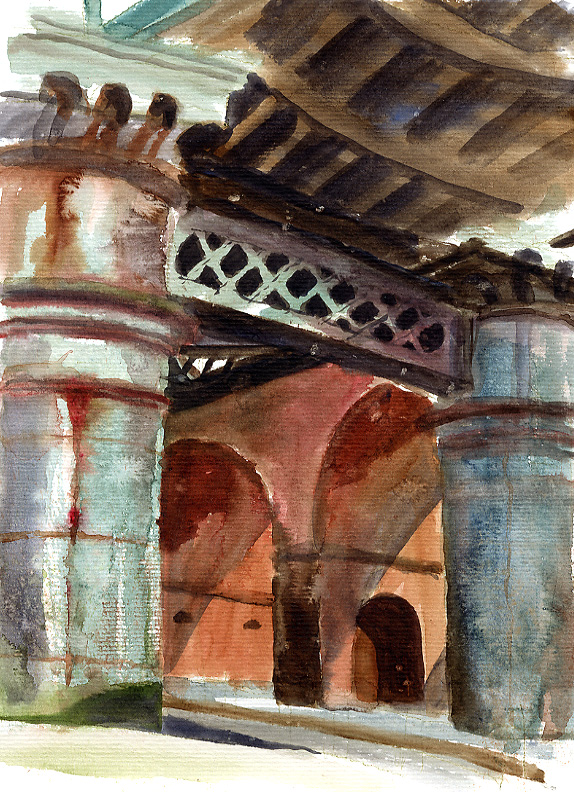 I had booked Dukes 92 for lunch, which had a huge table we could share. By now though our numbers had swelled to over 20, so we expanded to two tables, scoffing and chatting and watching Matthew draw his cooling food (as always).

The sun was out now, so I decided to go back to the railway for another go at my beloved bridges. I braved a view that had me sitting out in the middle of the pavement so, naturally, it began raining again after about 30 minutes! I scurried back under my arch and tried to finish off the painting above, but soon retreated back to MOSI. 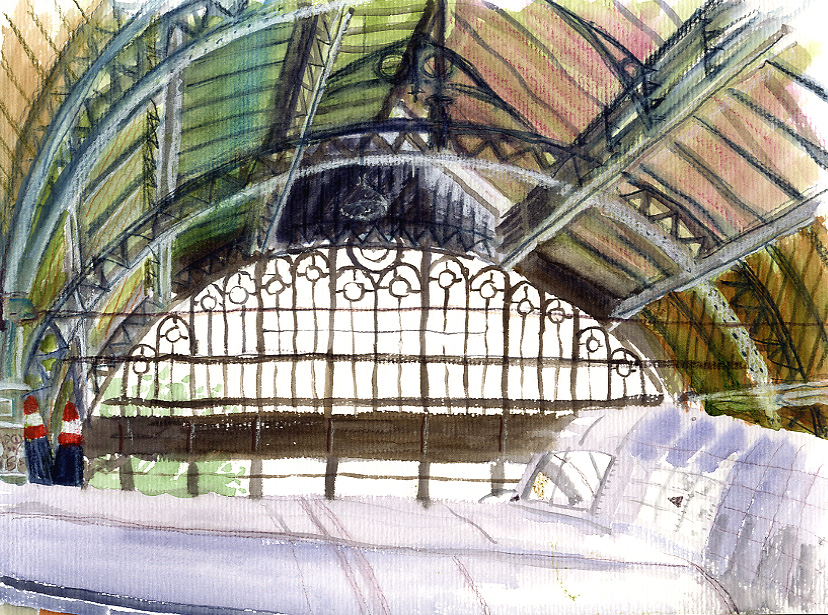 I didn't want to draw the museum's exhibits, but I remembered this wonderful, Victorian window in the Air and Space building (the same iron and glass building I drew the outside of, from the cafe).

I got lots of attention, including a little boy of about five: "How much do you sell your paintings for?". He told me he 'didn't paint as much as he would like' and that he 'liked collection art' (!) 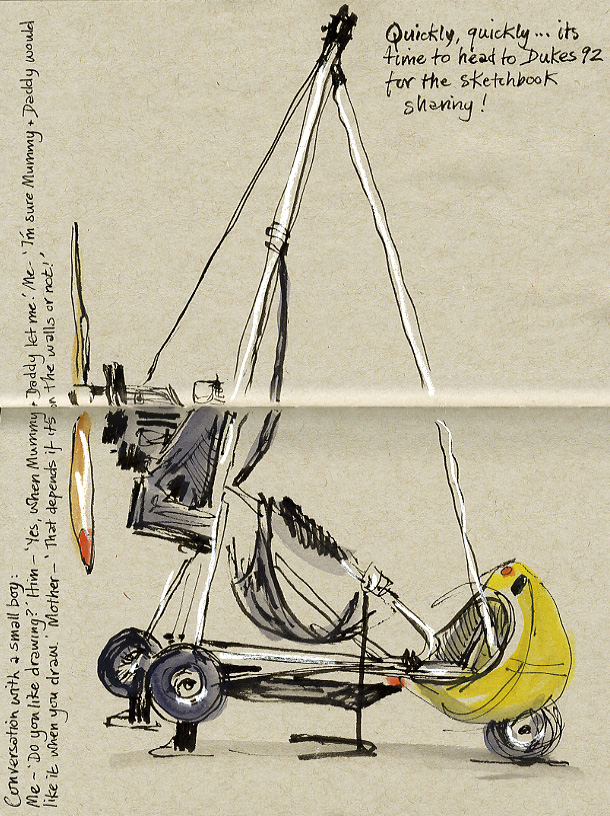 I laboured too long over the window and was getting bored with all the detail. I looked at my watch - only about 5 minutes before I had to leave to meet the others back at Dukes 92 for the sharing session. I desperately needed to draw something less fussy, so I quickly sketched what was in front of me, which I think might be a microlight (no time to check), then rushed off. 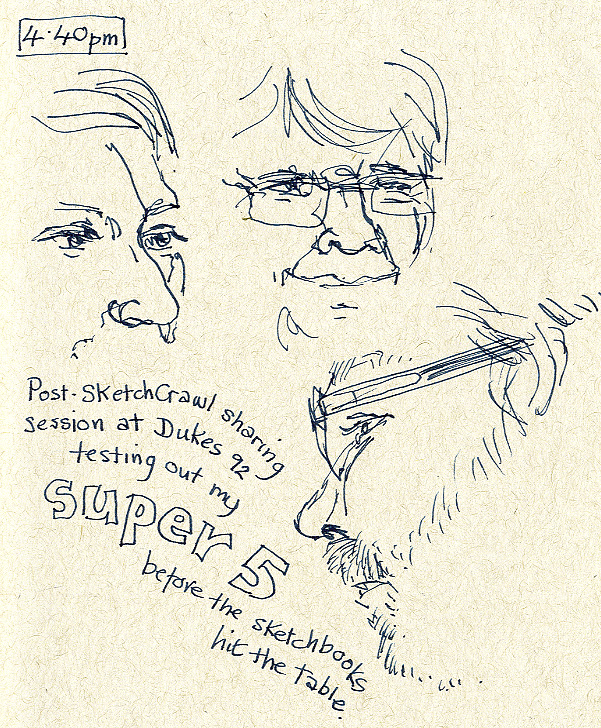 As usual, we all thoroughly enjoyed admiring each other's work from the day, sneaking a look back through all the sketchbooks and swapping sketching tips.

I had a new sketching pen with me, which I was given by Super 5, one of the sponsors of the forthcoming Usk Symposium: 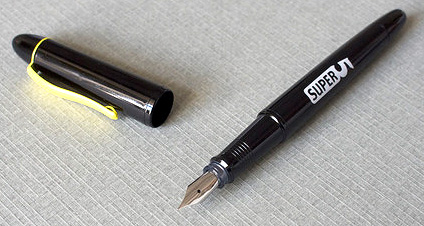 I didn't get around to using it during the day, so did a quick trial in the bar, sketching a few people around the table, before lending it to various others to have a go. It's very smooth and glides beautifully across the paper in all directions. There's a raffle to win one if you are interested (deadline May 30th). It gives a subtly variable line as you can see in the sketch, which I think really adds life to a drawing. It's not as wide a variance as my trusty Sailor though. It depends what you are after.

Thanks to everyone who turned up on Saturday, despite the dreadful forecast, and especially to the new members and to those from the Manchester Urban Sketchers group who joined us. One of the lovely things about SketchCrawling is all the interesting new people you get to hang out with.

Lovely post Lynne...so sorry couldn't join you and I'm sorry the Manchester weather let you down! Look forward to seeing you again soon.

the weather's not improved any since then either!!! Fab sketches

Those sketches of the bridges at the top are gorgeous Lynne, really good colours, love em, I like the lined paper, what is that? It adds something to your sketch. :)

Thanks all. It's not lined paper Julie, it's the texture. It's a Canson 'XL mixed-media' pad, for watercolour and acrylic, which has a more ridged finish than a standard watercolour pad. I bought it as an experiment, because it was 300gsm and much cheaper than the watercolour pads. Glad you like it!

Wonderful sketches, Lynn, despite the weather being against you. Thanks for the heads up on the Super 5 pen draw! :)